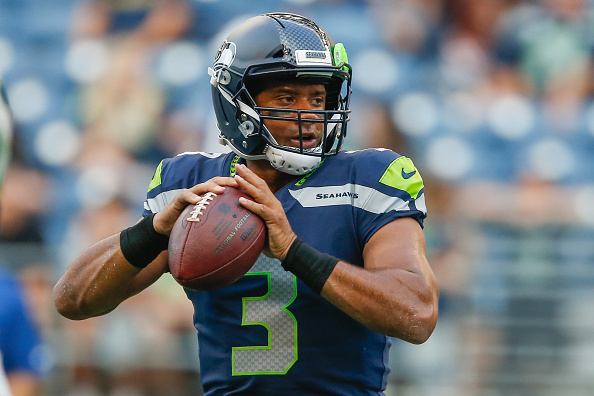 Without further ado, let’s get into it, talking some trends in the average draft position of some noteworthy fantasy assets!

How to approach the quarterback position is a yearly question that leaves owners doing countless mocks in an attempt to see what teams turn out the best. Do you grab Deshaun Watson , Aaron Rodgers or Russell Wilson early, or wait a few rounds and target the likes of Philip Rivers , Jared Goff or Marcus Mariota ? Some of it is personal preference, some is league setup and some is just the war of attrition in the draft room. Let’s take a look at the 2017 data of the top 12 scoring quarterbacks in a standard league:

H1: Wouldn’t it be worth drafting a quarterback with the upside of Watson, Wilson or Rodgers to push the boundary on the difference per game?

H2: What’s the big deal over 6.14 fantasy points per game? Let’s load up on backs and receivers and take a quarterback later.

What are you going to choose?

Who’s The Second Wide Receiver Off The Board?

Assuming Pittsburgh’s Antonio Brown is the first guy off the board—not always the case, however—and you want to take a receiver, where do you go? Atlanta’s Julio Jones ? Houston’s DeAndre Hopkins ? New York’s Odell Beckham Jr.? In the NFFC, in terms of ADP, Hopkins is first, followed by Beckham Jr., then Jones among these three wideouts. Let’s compare them across five different best ball setups:

Each wide receiver comes with elite upside, but none of these three guys are flawless.

Hopkins possesses some of the best hands in the game and was an absolute monster last season. He led the league with 13 touchdowns grabs and averaged a touchdown per game with Watson at the helm. He actually averaged more targets and yards per game when Watson was out of action, but Hopkins’ upside is at his highest when Watson is under center, due to the dynamic he adds to the offense. However, Watson is coming off a torn ACL and if Will Fuller cannot stay healthy, Hopkins will battle constant double teams all year long.

Beckham Jr. is one of the game’s most dynamic playmakers on the outside, but he is coming off a pretty gruesome-looking ankle injury. Aside from last year’s abbreviated campaign, Beckham Jr. has caught at least 90 passes for 1,300 yards and touchdowns in every season. He didn’t play in the team’s preseason opener, but he’s expected to be fully healthy and ready to rock and roll before the season opener. Furthermore, check out some videos on Twitter of him running routes, and damn, he looks smooth.

Jones has long been in the conversation for the game’s best receiver, racking up catches and yards like its nothing. However, Jones is averaging just five touchdowns per season over the last five years, after averaging nine per season in his rookie and sophomore campaigns. The team also drafted Calvin Ridley to improve the receiver crew, but Jones is still the guy. Regardless, he needs to find the end zone to compete for top dog status in the NFL.

Each comes with some concerns, and not only are you posed with the question of which of these three guys to take, but you need to evaluate your draft strategy to determine if taking one of these guys is safer/better than the likes of top-tier running backs like Alvin Kamara , Melvin Gordon , Kareem Hunt , Saquon Barkley and Leonard Fournette .

Experiment with some mock drafts with each receiver, as well as passing on them for a running back to see which team you like the best.

Team Defense: To Reach Or Not To Reach

One,  do not draft one in the ninth or tenth round, because no defense is worth it.

“But, Colby, the Jacksonville defense is so good and they are far and away better than any other defense in the league.”

Yes, they are a talented defense and have plenty of potential to be dominant again, there’s no doubting that. However, let’s take a look at the numbers and see how the preseason favorite fantasy defense (according to ESPN) panned out by seasons end.

Sure, there’s a few top-5 finishes mixed in there, but no preseason favorite in the last eight years finished that season as the top fantasy defense. In fact, the average finish for the preseason No. 1 fantasy defense is 8.6, which isn’t too close to the top spot, especially when you consider the fact that a defense is like Jacksonville is going to go off the board quite a few picks before the next defense is selected.

According to NFFC data, Jacksonville’s ADP is 117.52, which places them in the 10th round of a 12-team league. If you really believe Jacksonville is a lock to better themselves in 2018, then go ahead, but otherwise, wait a few more rounds and then grab a defense. Jacksonville was far from the consensus top defense heading into last season and they came out of the woodwork to absolutely dominate the league. Sticking with the NFFC data, the next defense (LA Rams) comes off the board nearly 17 picks later!