Cousins was entering the final season of his three-year, $84 million contract, but the Vikings didn't want to play games with their franchise quarterback It's a two-year, $66 million extension, one that will lower Cousins' 2020 cap number. He'll now be under contract through the 2022 season, and we can assume he'll be near the top of the quarterback market in annual salary. It's certainly debatable if Cousins has what it takes to get the Vikings over the hump, especially with an aging defense, but he'll collect his Sam Bradford-level paychecks while Minnesota finds out. To be fair, Cousins had his highest touchdown percentage (5.9) of his starting career in 2019 and is good enough to continually lead the Vikings to playoff appearances with the right supporting cast. Mar 16 10:05 am (EST) 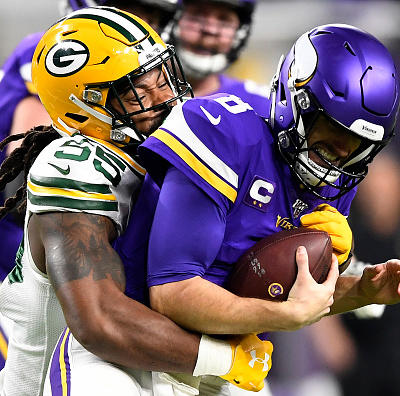 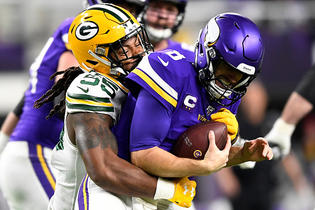 J. Clowney - DL
SEA
The Seattle Times believes the odds that free agent Jadeveon Clowney re-signs with the Seahawks are "likely increasing."
When the Browns opted to restructure Olivier Vernon's contract rather than release him, it might have removed Cleveland as a suitor. The Raiders have apparently made a lowball offer. Reporter Bob Condotta does not expect the Seahawks to offer the $15-$16 million that was originally on the table. Clowney is a good player with no good options.
Added 6:41 pm (EST)
Added 6:41 pm (EST)

D. Jackson - WR
PHI
NBC Sports Philadelphia's John Clark reports DeSean Jackson has apologized to Eagles GM Howie Roseman and owner Jeffrey Lurie for his antisemitic posts, and that both Eagles principals have told Jackson he needs to be "active to promote equality."
In other words, he is not getting released. Jackson has also reportedly spoken with Rabbi Doniel Grodnitzky of Chabad Young Philly to help Jackson "educate himself." Frankly, Jackson's excuses are absurd. He is a 33-year-old man who literally thought he was quoting Adolf Hitler. Either way, he seems genuinely remorseful and will be getting a second chance.
Added 6:02 pm (EST)
Added 6:02 pm (EST)

Q. Dunbar - DB
SEA
Quinton Dunbar has hired a second attorney in his armed robbery case.
If this were a tweet, we would quote it with "when your armed robbery case is going well." Both Dunbar and Seahawks coach Pete Carroll hinted last month at positive developments in his case, but this obviously suggests otherwise. Dunbar's original attorney claimed he had five witnesses who would say Dunbar did not take part. That was now almost two months ago in mid-May. It is becoming more and more of a question if Dunbar will be available for the entire 2020 season.
Added 5:53 pm (EST)
Added 5:53 pm (EST)

B. Scherff - OG
WAS
ESPN's John Keim reports there is "not much optimism" Washington reaches a long-term agreement with franchise-tagged RG Brandon Scherff.
Previously, there had not been an update on talks in three months, so this checks out. Guard is not a position teams enjoy overpaying at. Scherff is currently set to make a monstrous $15.03 million for 2020. Injuries have been a major issue for 28-year-old Scherff, as he's missed 15 games over the past three years. With Washington's front office in flux, no deal seems likely.
Added 4:35 pm (EST)
Added 4:35 pm (EST)

D. Jackson - WR
PHI
ESPN's Adam Schefter reports the Eagles' decision to keep DeSean Jackson could come down to whether his anti-Semitic posts are a default under his contract.
Guaranteed $4.8 million in salary (and having already collected his $2 million player option) this year, Philadelphia would first try to retrieve the guaranteed money Jackson's due if opting to part ways. A hot pick as Carson Wentz's No. 1 wideout this upcoming season, the 33-year-old's release would ultimately push either Alshon Jeffery (foot), Marquise Goodwin, or rookie John Hightower into the startling lineup across from first-rounder Jalen Reagor. The organization will likely issue another statement before the end of the day.
Added 1:06 pm (EST)
Added 1:06 pm (EST)

D. Jackson - WR
PHI
Eagles released an official statement regarding DeSean Jackson's anti-Semitic messages on his Instagram.
"We are continuing to evaluate the circumstances and will take appropriate action" the organization announced in a press release issued Tuesday afternoon. The full statement can be viewed in the link below. Jackson also offered a video apology for the quotes, stating he does "not have hatred towards anyone" and "didn’t realize what this passage was saying." This matter is far from resolved.
Added 12:06 pm (EST)
Added 12:06 pm (EST)

D. Jackson - WR
PHI
DeSean Jackson posted anti-Semitic messages on his Instagram story on Monday evening.
Jackson later claimed he has no hatred toward the Jewish community after he shared a quote he attributed to Adolf Hitler, saying "[white Jews] will blackmail America" and "[They] will extort America, their plan for world domination won't work if the Negroes know who they were." He also shared two posts expressing admiration for Louis Farrakhan, later claiming they were taken "the wrong way."  There was no right way to take them. The team is expected to publicly address the issue Tuesday afternoon.
Added 10:17 am (EST)
Added 10:17 am (EST)