For those who play in Head-to-Head Leagues, having a handle on which starting pitchers are scheduled to pitch in two games in an upcoming week is invaluable. Of course, if you are an owner in a roto league, and your starting pitching is not looking as good as it did when you drafted your team, or if injuries, demotions to the minors or general poor performance are hurting your placement in the standings, you may want to consider the streaming technique to pep up the rotation. Or you just like to shuffle the deck. Whatever your impetus, if you want to get an idea of who could benefit your squad in the next scoring period, you have arrived at the correct and proper place. On a weekly basis, this series of articles will set forth those starting pitchers that as of Saturday are on deck to take the hill twice.

The format is to put the group of two-start pitchers into three tiers. The first tier is entitled “Start ‘em If You Own ‘em” and consists of those pitchers that are suggested for you to wind up and let go, no matter where they are pitching or what opponent they face. Most, if not all, of these SPs will be owned in your league, but if you own one or two, smile and walk happy.

The second tier is called “Maybe Yes, Maybe No,” and is generally the largest tier. If there are enough members of the tier, then it will be broken down into sub-tiers for convenience in both the ability to provide analysis of the individuals that make up the tier, and to assist our readers in deciding how much risk they are willing to tolerate on a weekly basis. Depending on how many two-start options there are in a given week, the sub-tiers number either two, or at most, three.

The final tier is called “Not On My Roster” which I believe is self-explanatory. If you are absolutely desperate for a two-start option, due to inning minimums in your league settings, or are just a glutton for punishment, then you can consider rostering one or more of these guys. In good faith none of these pitchers can be recommended for one or both of their starts, but then again, it is your team and you are free to manage it as you see fit (a philosophy I would encourage more leagues to adopt instead of micromanaging every team’s moves during the season

Because we are into the first full week of the schedule, the pickings are slim to open 2018 with regard to those pitchers you can wind up and let go without concern. The seven SPs that comprise the top tier are those you want to start in both their appearances in the upcoming week, although Hamels could potentially have been dropped to the middle tier based on his performance last season. He did suffer an early oblique injury in 2017, which could have led to his diminished strikeout numbers and control issues, and if you want to avoid him against the Blue Jays at home in his second start, do so without fear of reprisal.

As noted above, early in the season there are limited two-start options available. These 10 starting pitchers are ranked in a rough order of preference, although all are worthy of consideration for at least one of their starts, if not both. Certainly, these SPs offer better opportunity for fantasy goodness than those in the bottom tier.

Lynn is in his second year after undergoing Tommy John surgery (TJS) following the 2015 season. He looked sharp in limited action in spring training and gets to open his season in pitcher-friendly PNC Park before heading home to take on Seattle at Target Field. He does not have an overpowering fastball but does provide adequate K numbers. A .250 BABIP in 2017 does portend regression this coming season, however, so while he was touted in drafts, tempering your enthusiasm may be warranted until he demonstrates otherwise.

Mikolas pitched in Japan the past three seasons, successfully at that, and is hoping to bring his excellent control stateside for the Cardinals. He does have a pair of matchups that are not ideal, facing the Brewers on the road and then taking on the Diamondbacks at home. Both of those offenses can punish pitchers but confidence and control can go a long way to help a SP be effective. He was not exactly lights out this spring, either. 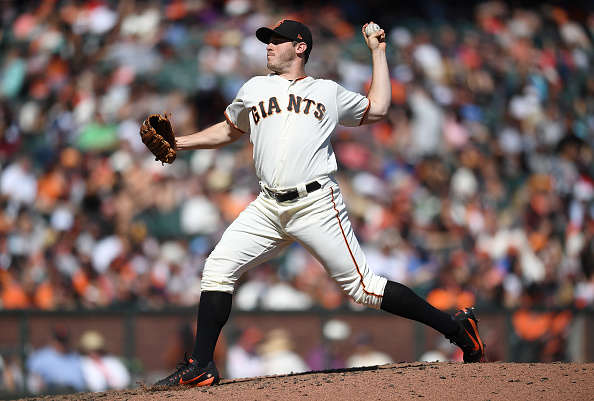 Blach opens the season’s second week with two home starts, which bodes well for his ability to build off his Opening Day victory over the Dodgers. He gets to face the Dodgers again in Week 2, and his success against the Giants’ NL West rivals runs back into last season, so there is that positive aspect to look to in the coming scoring period. He is not a strikeout source, and if he continues to walk as many hitters as he sets down on strikes, his success will be fleeting. With both Madison Bumgarner and Jeff Samardzija out of the rotation to open the season, however, he seems locked in to the rotation for the nonce, and with the right matchup, is a useful SP option.

Walker should benefit from the humidor at Chase Field, although only one of his two Week 2 appearances are at home, the second being in St. Louis. Still, both his starts should be in decent pitcher parks (we need to see how things play out in Arizona, naturally) and he has been a dependable option in terms of win/quality start potential and K numbers over the past couple of seasons and should continue to be a useful fantasy option for your rotation.

Junis is on the road for his pair of starts in Week 2, and that is a negative, as he was a better home starter in 2017. He has continued to demonstrate excellent control this spring, which was a plus for him last season, and has also racked up strikeouts at a better than expected rate. He did flash the ability to make hitters miss his offering in the minors, so perhaps he is just following a normal development path. He would make a better choice to insert in your starting fantasy rotation if he were at Kauffman Stadium in the season’s second week, but still offers potential, especially against the rebuilding Tigers. Perhaps sitting him when he toes the rubber in Cleveland would be prudent.

Gonzales missed all of 2016 with TJS and was not overly impressive in 11 appearances in 2017 with the big-league club (eight starts). He looked sharp in the spring, though, with a 21:9 K/BB ratio over 26 innings. He does pitch on the road for both his starts, although the first in San Francisco is in a good pitchers’ venue. Seattle figures to have a good offense, and that makes the 26-year old southpaw a potentially effective two-start option.

Ryu is not an exciting option as a starting pitcher but does a lot on the mound that can provide fantasy benefits, including reasonable K numbers and a useful ERA. Note, though, that a 4.79 FIP in 2017 belies his tempting 3.77 ERA. He is on the road for both his Week 2 starts, but if Chase Field and the newly-installed humidor act as anticipated, starts in Arizona and San Francisco are not horrible places to pitch.

Garcia signed with Toronto, after pitching for three teams in 2017 (Atlanta, Minnesota and in New York with the Yankees), and figured to join the rotation for the Blue Jays, albeit as the fourth or fifth starter. He has a pair of good matchups, facing the White Sox and then the Rangers, although the second start in Texas is not in a great venue. Garcia does rely on his ability to get hitters to put the ball on the ground, though, so that helps at Arlington. He can provide average strikeouts, if that helps your Week 2 needs in your fantasy matchup.

Davies was terrible at home last season and has both of his Week 2 trips to the mound taking place at Miller Park, which gives cause for concern. Of course, he was worse on the road the previous season, so there is also reason to see his 2017 struggles as an aberration, not a trend. Davies needs to rely on his ability to generate groundballs from opposing hitters, as his stuff is not overpowering, and he does not miss a ton of bats. He is at the end of the middle tier for a reason. Use him if you are desperate for a starter with two starts, or if you feel lucky.

You would do well to simply avoid these pitchers in the early going. Some of these guys could prove useful, but right now, the risk is to high to slide them into your rotation for two starts to open the season. For example, Harvey could be back to his old form, as he has been assuring anyone who wanted to listen this spring, but discretion is recommended until the results are evident. Newcomb is another SP that has good potential, but his matchups are terrible this week, and the same goes for his teammate Teheran, who also carries with him the stigma of being at best a NL-only option at this point. If by chance one or more of these bottom-tier SPs break out, by all means pat yourself on the back if you took a chance on them, but the risk/reward does not favor employing any of these 10 pitchers this week.