Steve Pimental lets you know what to expect from your FantasyAlarm coverage for the 2019 WNBA season. 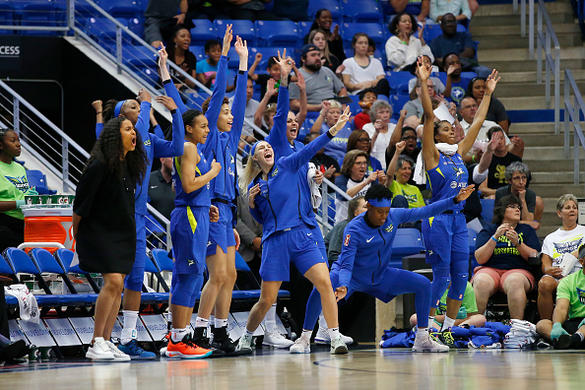 This is a conversation I have a lot, and it makes me a little sad each time:

Friend: What sports do you cover for FantasyAlarm?

Me: I do a little bit of everything; NFL, NBA, MLB, WNBA, occasionally PGA.

Friend: Really, WNBA? I didn’t even know they had fantasy WNBA? Are you just doing that so you can work your way up to bigger and better things?

Me: Actually, no. I really love the WNBA. It’s my favorite sport to write about or play DFS. I feel very fortunate I get to cover it for FantasyAlarm.

I’ve pretty much always loved women’s sports, and I can’t really explain why. Maybe I’m a hipster. It probably has something to do with being a feminist. Maybe it's because growing up I used to play basketball one-on-one against my friend Val and she beat me every single time (she’s three years older than me, cut me some slack). Maybe its because when I was a little bit older I loved to pick my younger sister for pickup basketball games in our neighborhood and destroy whatever team of all guys we were playing.

Maybe my love for women’s sports comes from watching tennis in an era where the women’s game was far, far, far, far (I could keep going, but you get the idea) better than the men’s game. Maybe it developed more recently when I watched the U.S. Women’s national soccer team dominate international competition while the men were simply happy to qualify for the World Cup.

I know I was definitely into women’s sports by the time I got to Illinois State University. I passed up opportunities to cover men’s basketball and baseball to cover women’s basketball and softball. I drove eight hours with some friends to watch the ISU women’s volleyball team play in Kentucky. Two of my best columns for the school newspaper were about how awesome the volleyball and women’s basketball teams were. My interest in women's sports obviously has not waned, and it has brought me here, to my third year covering WNBA DFS contests for FantasyAlarm.

Even if you don’t have the same history with women’s sports that I have, there are plenty of reasons to like watching the WNBA and playing WNBA DFS.

If you complain that the NBA is only threes and dunks, and you miss the days of big physical post play, then the WNBA is for you. Don’t get me wrong, WNBA teams take and make a lot of threes, but the best players in the WNBA are disproportionately post players. Whether you are watching Liz Cambage, Tina Charles, Sylvia Fowles, Britney Griner, the Ogwumike sisters, Stefanie Dolson, Jonquel Jones or A’ja Wilson, great post play is on display nearly every day in the WNBA. It doesn’t hurt that all of those players are also good passers, so if they’re not scoring themselves, they’re getting open looks for teammates.

Show me the money!

The last 12 months have been very good for FantasyAlarm’s WNBA and NBA DFS coverage. While most of the credit for the NBA goes to Jon Impemba and James Grande, I feel like I held my own, and I am excited to apply the lessons I learned playing NBA DFS to the WNBA. We won money last year and I am confident 2019 will be even better.

In addition to producing winning advice and lineups, we developed a pretty great community in FantasyAlarm’s NBA DFS Chat. It was great to be a part of, and if you were part of that community or wish to be, you don’t have to wait until October. In addition to my articles, podcasts and videos, I will be in the WNBA DFS Chat to answer your questions and hopefully have some fun, even on days where we don’t have any WNBA coverage.

That brings us to the true purpose of this article, which is to lay out our plans here at FantasyAlarm for our WNBA coverage. As has been the case throughout the two years DraftKings and FanDuel have offered WNBA DFS contests, I will spearhead our efforts with a WNBA DFS Playbook and Optimal Lineups for slates with three or more games.

This year, I am proud to announce, we are going above and beyond what we have done in the past to bring you even more great content. I’m probably most excited to announce that FantasyAlarm will produce WNBA DFS podcasts, which I will host alongside the one and only Howard Bender. Howard is relatively new to WNBA DFS, which makes him the perfect proxy for anyone who wishes to give it a shot this summer. Those fans can learn along with Howard throughout the season, and if you know anything about Howard, you know we are going to have a ridiculous amount of fun along the way.

I usually do my best DFS work, regardless of sport, at the start of the season. DFS prices are based on the previous year’s stats, and if you can identify players who are poised to take a leap, you can usually rack up the fantasy points. Our first podcast will be up Thursday to get you ready for Opening Tip on Friday.

In years past, FantasyAlarm’s WNBA coverage has mostly been confined to during the season, but this year we have expanded our coverage to include multiple preseason articles. If you haven’t already, be sure to check out my look at all of the offseason moves for all 12 WNBA teams. I went in-depth on all the biggest injury news in the WNBA DFS Injury Report, and I also took a lot at the biggest preseason question for each team. Most recently, I took at look at the fantasy implications of the Liz Cambage trade.

Keep an eye out soon for my discussion of WNBA DFS strategy before the start of the regular season, as well as our WNBA DFS Playbook and Example Lineups.

As with all of our other sports, our WNBA coverage is about you, FANation. If you have an idea for a video you want to see or a topic you want to be discussed in an article, let us know in the WNBA chat. We will do our best to give the people what they want.