Steve Pimental looks at the fantasy repercussions for all of the big injuries in the WNBA heading into the season. 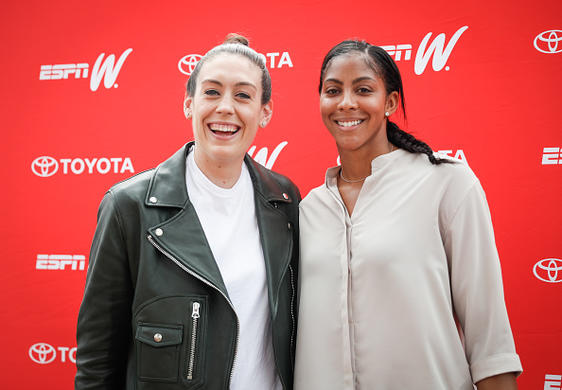 WNBA fans have been pretty fortunate in recent seasons that there haven’t been a ton of injuries to big-name players. It feels like that has changed this season. Three former MVPs are set to miss some or all of this WNBA season and two other all-stars are joining them on the bench to start the season. These injuries will drastically alter the fantasy landscape of the WNBA, especially early in the season. If we can identify how these injuries will affect their teams, we could get a leg up for DFS.

It's an absolute shame that it took a catastrophic injury to the reigning MVP for most sports media outlets to notice women’s basketball players have a ridiculous year-round schedule. Seattle’s chances to repeat as WNBA champions have likely gone out the window with Stewart’s torn Achilles, and the only question is if they can still compete for a playoff spot.

For that to happen, Jewell Loyd probably has to emerge as the best guard in the WNBA (at least until Skylar Diggins-Smith returns). I believe such a leap is possible for Loyd, and if nothing else, she should lead Seattle in usage by a country mile.

Seattle really doesn’t have any good options for replacing Stewart in the starting lineup. Alysha Clark could slide down to the three, but she’s really more of a four. At least that would allow Crystal Langhorne to play more than the 13.0 minutes she averaged last year. Langhorne had started almost exclusively in her 11-year career until last season, but even if she continues to come off the bench, she could be a punt play early on.

The other starting options are only marginally better. Seattle could start Shavonte Zellous or Jordin Canada in a three-guard lineup, but they would be awfully small. Like Langhorne, Zellous could be a nice value for fantasy even if she comes off the bench.

Sami Whitcomb probably makes the most sense as someone who can space the floor and nominally guard threes, but to this point in her career, she has produced very little for fantasy. Kaleena Mosqueda-Lewis could be in the forward rotation as well, but she doesn’t figure to be a factor for fantasy.

Taurasi is expected to miss at least a third of the WNBA regular season after undergoing a back procedure April 24. Rookie Sophie Cunningham seems like a natural Taurasi replacement as far as skills, but it seems unlikely she would start ahead of Essence Carson or Yvonne Turner. Phoenix’s entire starting lineup is playable for fantasy with Taurasi out, though Britney Griner and DeWanna Bonner are the only ones with particularly high ceilings. Even if Cunningham comes off the bench, she might be a better GPP play than Carson or Turner just because she’s more likely to create her own shot.

McCoughtry tore ligaments in her left knee in August and missed the last four games of the regular season as well as the playoffs. With McCoughtry out, Alex Bentley provided a huge scoring lift off the bench in the playoffs, averaging 15.6 points in 24.0 minutes per game. I suspect she will continue to come off the bench to start the season, but if she remains there could depend on if Brittney Sykes takes a step forward in her third season.

Jessica Breland and Elizabeth Williams benefitted from more well-defined roles with McCoughtry out, and they should both be safe fantasy plays. Breland might have some untapped upside as well.

I think the obvious fantasy targets in Minnesota are Karima Christmas-Kelly and Napheesa Collier since they both play the same position as Moore. Christmas-Kelly has never been even a secondary scoring option on her team, and Collier’s ceiling is probably limited unless she develops an outside shot or plays exclusively at the four, both of which seem unlikely in her rookie season.

The real Moore replacement, at least for fantasy, is likely Odyssey Sims. I admittedly had forgotten that Sims averaged 14+ points in each of her first three seasons before joining a Sparks team that had much better scoring options. The Lynx will need Sims to get into the paint and create for herself and others, and there is no reason to believe she is not still capable.

I understand having a child is not an injury, but Skylar Diggins-Smith is expected to miss an unknown number of games as a result, so I’m going to mention it here. I would argue Arike Ogunbowale was the best pick in the draft as someone who can step into the rotation immediately to replace some of Diggins-Smith’s playmaking but also a player who should fit next to her in the backcourt. She probably should start right away considering Dallas didn’t really have a backup point guard last year. On the other hand, Allisha Gray could technically start at point guard, with either Kaela Davis or Tayler Hill starting at shooting guard. All four of those players could be useful for fantasy, but whoever starts next to Gray should at least have a higher floor.

Parker left Saturday’s preseason opener with a hamstring injury in her left leg in the first quarter. She is set to miss 3-5 weeks, and it’s anyone’s guess what this team will look like without her. Chelsea Gray was great when Candace Parker was out last season, and she should probably be playable for cash games until Parker returns. That being said, she could still be the third option on offense behind the Ogwumike sisters. The Sparks have some options for replacing Parker in the starting lineup, including playing three-guard lineups. My guess is Tierra Ruffin-Pratt would spend most of the time at small forward, though Alana Beard could play there as well. Beard’s fantasy value likely won’t be affected, but TRP could be a cash play if she starts. Whoever was to start in Parker’s place would be at best the fourth scoring option so her ceiling would be limited. I had written previously that the Ogwumike sisters would likely be overpriced early on, but both would probably be cash plays if Parker is out. It will also be worth tracking how much new head coach Derek Fisher staggers Nneka and Chiney Ogwumike with Parker out. If he insists on sitting them at the same time, that could limit their individual ceilings for fantasy.

This Fever team was almost certainly heading for the WNBA draft lottery again this season, but at least Vivians provided some desperately-needed spacing for Kelsey Mitchell to go to work. I still think Mitchell will show some improvement after she shot 34.6 percent from the field last season, but she might not really break out until she has a better team around her.

Unlike the others on this list, Shenise Johnson is returning from an injury, not missing time because of one. Johnson missed half of the 2017 season and all of the 2018 season due to a torn ACL, and Indiana struggled to get starting caliber guard play as a result. With Vivians out, Johnson should start sooner than later. I’ll be interested to see what her price is, but she should be a solid cash play at the beginning of the season, especially if she starts.