Steve Pimental looks at the biggest question facing every WNBA team in the preseason. 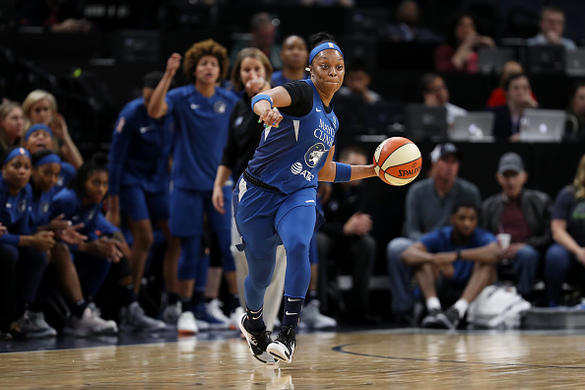 I admittedly have not paid much attention to the WNBA preseason past years, but that has probably been a mistake. We obviously don’t get to see a team’s full rotations, especially with several players finishing up their schedules overseas, but we can at least start to get some of our questions for the upcoming season answered. With that in mind, here is my big question for each WNBA team that I am watching this preseason:

Who is the secondary scorer behind Tiffany Hayes?

With Angel McCoughtry out down the stretch and in the playoffs last season, Alex Bentley was a force off the bench, averaging 15.6 points in 24.0 minutes on 44.4 percent shooting. On the one hand, I’m not sure she can keep that up for an entire season, or even half of it. On the other hand, if she does, I wonder how long Dream head coach Nicki Collen continues to bring her off the bench. On another hand, Brittney Sykes has been very good with McCoughtry out as well. The most likely outcome is probably that Bentley, Sykes, Jessica Breland and Elizabeth Williams all take turns as the second option on offense, but I will certainly keep an eye out in the preseason for anything that looks like a breakout performance.

Can new head coach James Wade get anything out of Alaina Coates?

Pretty much everyone on this team is a known quantity, including rookie first-round pick Katie Lou Samuelson. Chicago’s presumed starting five of Stefanie Dolson, Gabby Williams, Allie Quigley, Diamond DeShields and Courtney Vandersloot was one of the best lineups in the WNBA last season, but the bench lineups were nearly all disasters. If the bench is going to provide anything this season, both Samuelson and Coates will have to contribute. Coates was the second overall pick in the 2017 WNBA draft, but she missed that entire season while recovering from an ankle injury. As a rookie in 2018, she almost never stood out. The former South Carolina center averaged just 3.4 points, 3.2 rebounds and 0.2 blocks in 11.4 minutes per game. She shockingly had the best net rating on the team last season, at -1.4, but I’m guessing that was more a result of playing in garbage time than anything else.

Will any of the bench players stand out?

Connecticut’s roster is pretty much set after the Chiney Ogwumike trade. This offensive will run through Jonquel Jones and Alyssa Thomas, with Jasmine Thomas and Courtney Williams periodically having big games as well. The fifth starter, Shekinna Stricklen, ranked dead last on the team in usage last season, and that is unlikely to change. Thus, the only question is if someone like Morgan Tuck, Brionna Jones, Layshia Clarendon or Kristine Anigwe is going to contribute consistently off the bench. My guess is no, but if one of them pop in the preseason, they could have fantasy value in the regular season.

Unfortunately, we probably won’t get a great idea of how much she’ll play until the season actually starts, but at least we will see if she is running with the first unit and how much she has the ball in her hands. I believe Dallas will need to lean on Ogunbowale heavily with Skylar Diggins-Smith out, but I would like to see how she looks in the preseason first. This question could become more complicated if the reported Liz Cambage trade to Las Vegas goes through. Ogunbowale may have to compete with Moriah Jefferson for the starting point guard spot in that scenario, though it is also possible they wind up playing together a fair amount.

Is Shenise Johnson a starter right away?

If Johnson doesn’t regain a starting spot eventually, something has gone terribly wrong. If she starts right out of the gate, she would almost certainly be a cash play. Indiana is desperate for a  backcourt presence next to Kelsey Mitchell, and Johnson should fill that role nicely nearly two years removed from a torn ACL.

Moriah Jefferson, Kelsey Plum and Kayla McBride were almost certainly three of the Aces five best players last season, but they played together just 51.8 minutes despite having a 16.4 net rating. With first overall pick Jackie Young and Sugar Rodgers now also in the mix, Lambeer probably can’t get away from using three-guard lineups. Even if he does, I’m not sure there’s room for any of those five to produce consistently for fantasy outside of Kayla McBride. Lambeer may opt to just not to play Jefferson and Rodgers, which would probably be good for fantasy players but bad for the Aces.

Will Derek Fisher find a way to mess this up?

The Sparks have by far the best roster in the WNBA from top to bottom, and they are handing it over to the worst coach in the entire league. Fisher was 40-96 in two seasons as head coach of the New York Knicks, and while some of that can probably be blamed on the dysfunction of the franchise, he didn’t do anything to lead us to believe he is actually a good head coach. I’m not sure he can mess this up, but balancing four star players and several bench players who would be starters elsewhere could prove to be tricky. I’m probably mostly fading this team for fantasy, especially early on, but I might change my mind if they look like a well-oiled machine in the preseason.

Who’s the secondary scorer and playmaker behind Sylvia Fowles?

The most likely answer is Odyssey Sims, who has played that role in the past (though not the last two years). The problem is Sims isn’t a great outside shooter, and neither are many of her teammates. Driving lanes could be tough to come by. Rookie Napheesa Collier has the physical skills to score in bunches, but she isn’t much of a shooter, either. Karima Christmas-Kelly will probably have two or three games when he scores 20+ points, but she has averaged more than 11 points per game just once in her nine-year WNBA career. The answer might actually be no one, which would be unfortunate for fantasy.

Sims came off the bench in Minnesota’s first preseason game but led the team in minutes and points. Obviously, keep an eye on if she continues to play behind Danielle Robinson and if she gets more minutes. I wasn’t too worried about Sims losing minutes to Robinson, but I kind of am now.

Who starts besides Tina Charles and Kia Nurse?

The answer for the first preseason game was Han Xu, Brittany Boyd and Asia Durr. That is pretty much the best case scenario for fantasy, though I’m still not convinced Han Xu can actually play next to Tina Charles. Boyd’s ceiling is probably limited by playing with three other capable scorers, but she should have a high floor as a starter.

It is really nice to see Durr starting from day one. The Liberty really have no reason not to throw her into the fire from day one, and she has an awfully high ceiling as a starter.

I’m probably least concerned about who starts next to Tina Charles up front, though Han Xu showed impressive agility and the ability to put the ball on the floor in the first preseason game of the season. She’ll almost certainly get pushed around by more physical centers, but I could see her taking advantage of some of the weaker centers in the league.

Phoenix has a lot of options, with Essence Carson, Sophie Cunningham, Leilani Mitchell, Stephanie Talbot and Yvonne Turner all in the mix. Unfortunately for us, it is possible that whoever starts doesn’t play enough minutes or have a high enough usage to be playable in fantasy. That being said, I would give at least a slight edge to whoever starts. Sophie Cunningham has the best chance of matching Taurasi’s skill set, and she and Mitchell probably have the most upside of any of these players. A Mitchell/January backcourt is awfully small, but they surprisingly played 133.3 minutes together despite a -8.7 net rating. It seems unlikely that Mitchell starts since Phoenix doesn’t really have another point guard, but I wonder if those two get even more minutes together before Diana Taurasi returns.

Will Crystal Langhorne and Natasha Howard play together?

Langhorne and Natasha Howard played just 42.4 minutes together last season, but Seattle had a 4.8 net rating in those minutes. As a result, Langhorne mostly rode the bench while Howard broke out alongside Breanna Stewart. With Stewart out for the season, Seattle probably needs Langhorne and Howard to play well together just to make the playoffs. If they can coexist, Langhorne could be a nice value play early on.

Can Myisha Hines-Allen make a leap in her second year?

Much like Connecticut, Washington doesn’t really have anything to answer in the preseason. That being said, Tierra Ruffin-Pratt is gone and with Elena Delle Donne’s injury history, Myisha Hines-Allen could be asked to play an important role at some point. If she does have to enter the starting lineup down the road, I will feel better about playing her for DFS if I have seen her do well in the preseason.