Chris Bouvier takes a look at the NFL landscape following Week 15 and tells you which players stock is rising or falling heading into Week 16. 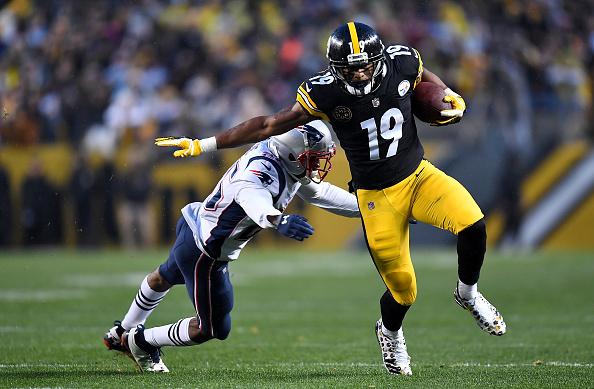 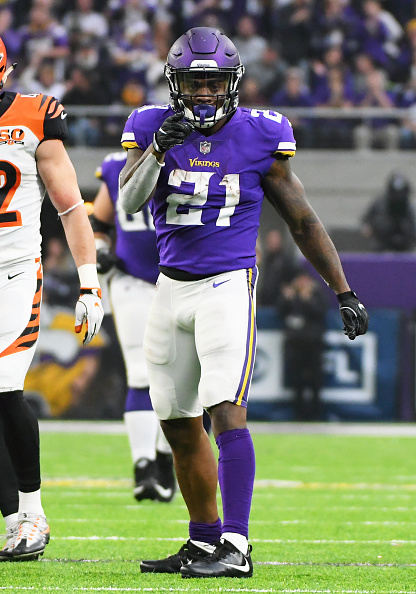 JuJu Smith-Schuster WR, PIT- Antonio Brown has a partially torn calf muscle and isn’t expected to play in Week 16. JuJu is clearly Ben Roethlisberger’s favorite receiver outside of Brown and is most similar in play style. Smith-Schuster has been outstanding even while ceding targets to all of the other weapons in this offense so taking away the biggest target should do wonders for the young receiver. With a matchup against a Texans squad that gives up a ridiculous amount of points week in and week out, JuJu will look to put up huge numbers. If you have him or can manage to get him, start him and clear off a nice spot on your entertainment center for that fantasy football championship trophy.

Jerick McKinnon RB, MIN- Latavius Murray is the guy getting the bulk of the carries in the Minnesota Vikings offense but McKinnon is still the most dangerous back they have. McKinnon is averaging 11.8 PPR points per game over his last four games and has been somewhat of a poor man’s Alvin Kamara. In Week 15, McKinnon had seven receptions for 114 yards and now gets to face a Packers team this week that was just torched by a similar style back in Christian McCaffrey who had 136 yards on 18 touches (only twelve carries). McKinnon also had one of his better games in Week 6 against this Packers team where he put up 99 yards on 20 touches while scoring twice, once on the ground and once through the air.

Greg Olsen TE, CAR- He’s back! In Week 15 Cam Newton went to ol’ reliable twelve times, leading all Panthers receivers on the day. Olsen turned those targets into nine receptions for 116 yards and a touchdown. After trading away Kelvin Benjamin to the Bills, Cam Newton has been eager to get his security blanket back from injury and it appears the rust is gone. The Panthers now get to face the Buccaneers (a short week for Tampa Bay) and get to play the game at home. The Buccaneers have been solid as of late against tight ends outside of Week 13 when they gave up a 10 catch, 94 yard game to Detroit Lions tight end Eric Ebron, although Ebron is the only talented tight end they’ve faced over the last several weeks. 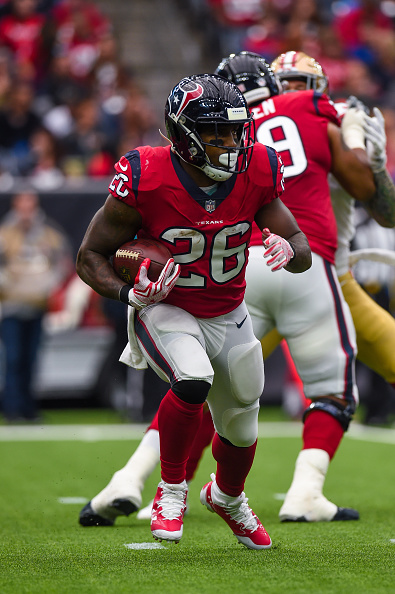 Lamar Miller RB, HOU- Houston is officially in shambles after losing 45-7 to the Jaguars and Lamar Miller has been very bad. Over the last four weeks his yards per carry in those games have been 3.0, 3.7, 3.1 and 3.6. Week 15 was even worse for him as Alfred Blue out touched him 12-11 in the blowout. Game flow has been a major issue for the Houston offense as of late with the defense allowing whatever the opposing team wants to do and not having a quarter back to keep them in it. With that workload and a matchup against a tough Steelers team on the horizon, Miller simply can not be started.

Jamaal Williams RB, GB- So I have good news and I have bad news. The good news is Aaron Rodgers is back! The bad news is it’s going to ruin any hope that Jamaal Williams can help his fantasy owners in the playoffs. In Week 15, Williams had only ten carries for 30 yards and not a single target in the passing game. The Packers came out and immediately let Rodgers loose, throwing 45 passes and also running the ball six times for 43 yards. Next week they welcome the Minnesota Vikings to town and with Green Bay fighting for a wild card spot expect the Packers to lean heavily on their star quarterback rather than a rookie running back.

Derek Carr QB, OAK- Remember when the Oakland Raiders and Derek Carr were a thing? Good times, good times. The Raiders are now 6-8 and have the Eagles and Chargers defenses to finish out the 2017 season, both in the top ten in least fantasy points given up to quarterbacks in ESPN standard leagues. Carr hasn’t thrown more than one touchdown on the road in any game since Week 1 against the Titans and with two road games against the Eagles and Chargers coming up there’s no reason to expect that to change. Put your championship hopes in someone else’s hands.

Dion Lewis RB, NE- Dion Lewis is always dangerous and has seen a consistent workload since Week 5 against the Buccaneers. What makes Lewis even more intriguing over the next two weeks is the fact that fellow running back Rex Burkhead suffered a knee injury and will likely miss the final two games. The Patriots will now get a visit from the Bills in Week 16 and they’ve been horrendous against the run since trading defensive tackle Marcell Dareus to the Jaguars in October. The Bills have allowed the most rushing touchdowns and second most rushing yards of any team in the league this season. The only cause for concern with Lewis is that he plays for a Patriots team that doesn’t always feature a single back, however Lewis is likely the main recipient of carries in Week 16.

C.J. Anderson RB, DEN- The Broncos gave the ball to their starting running back 25 plus times for the second time this season, leading to his only two 100 yard games in 2017. Week 15 brought 30 carries for 158 yards against the Colts, 19 carries and 119 yards more than backup Devontae Booker. It’s been very hard to trust Anderson and his workload in this offense as he’s carried the ball ten times or less in six games this season. However, with 52 carries in the last two weeks it appears that the coaching staff is adamant about feeding Anderson to finish out the season. Week 16 brings a road matchup with the Redskins who just gave up 4.1 yards per carry and 141 yards to a Cardinals team that is tied for last in the NFL in YPC. 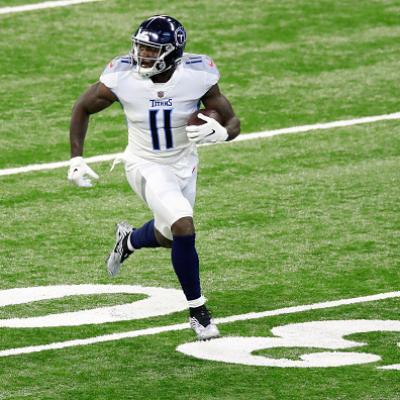 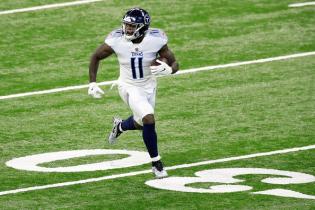 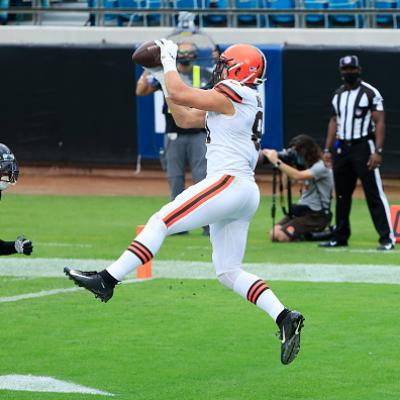 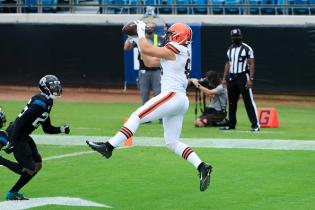 M. Breida - RB
MIA1
Dolphins placed RB Matt Breida on the reserve/COVID-19 list.
Breida missed Friday's practice with an undisclosed illness. We're not sure if he has COVID-19 or if he was exposed to someone who tested positive for the virus, but he'll be out for Week 13 either way. Myles Gaskin (knee) could be activated this weekend and take the workhorse role in Miami's backfield. If Gaskin remains out, the Dolphins would be forced to roll with some mix of pass-catching specialist Patrick Laird and rookie Lynn Bowden, Jr. Both backs should be rostered in 12-team leagues.
Added 3:19 pm (EST)
Added 3:19 pm (EST)

M. Breida - RB
MIA1
Matt Breida (illness) did not practice Friday.
Dolphins head coach Brian Flores wouldn't say if Breida's illness was COVID-19. He's uncertain to play in Week 13 against the Bengals. Myles Gaskin (knee), despite practicing over the past two weeks, might not come off injured reserve in time for the team's Week 13 game. Meanwhile, DeAndre Washington (hamstring) and Salvon Ahmed (shoulder) are out. Miami "will likely lean on Breida -- if he can play -- and Patrick Laird" if Gaskin is out. There's not a whole lot of fantasy value in Miami's backfield if Gaskin is inactive though. Rookie Lynn Bowden is a speculative add in deeper leagues ahead of Week 13.
Added 3:06 pm (EST)
Added 3:06 pm (EST)

D. Cook - RB
MIN1
Dalvin Cook (ankle) will play in Week 13 against the Jaguars.
The issue isn't Cook's status for Sunday, but coach Mike Zimmer's recent remarks that he'd like to "be smart" with Dalvin's touches moving forward. Sunday presents an opportunity to do so since the Vikings are favored by -10.5 points at home and implied to score the second-highest total (31) of any team on Sunday. Alexander Mattison still has sketchy standalone value since he would likely only be used if this game gets drastically out of hand. Fantasy players should still consider Cook an RB1 despite Zimmer's comments.
Added 2:16 pm (EST)
Added 2:16 pm (EST)