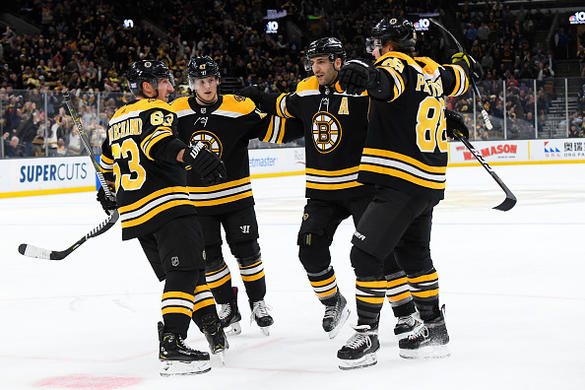 While this year’s Stanley Cup Playoffs have seen plenty of upsets, the Boston Bruins managed to avoid the carnage. The B’s finished the regular season tied for the second most points in the league, so it’s no surprise to see them in the Eastern Conference Finals. Their opponent, the Carolina Hurricanes, is the surprise team of the East as the wild card team was 23rd in the league in points on January 2. As a result, it’s not a surprise that Boston is a -150 favorite to win the series with Carolina at +130. Once you take the juice out, it’s basically -140/+140, which means Vegas thinks Boston has about a 58 percent chance to win the series.

You may be wondering how Carolina went from 23rd in the league almost halfway into the season to the Conference Finals. The honest answer is probably just a course correction in luck.

Through January 1, the Canes ranked second in the league in Corsi For percentage at 55.73 percent at five-on-five (score and venue adjusted). That means they had 55.73 percent of the shot attempts in their games to that point with only San Jose having a higher percentage of shots relative to their opponents. Carolina also ranked third in high danger chances for percentage. The Canes were generating many more shot attempts and many more high danger scoring chances than their opponents, yet they were losing more than they won. That’s tough to do, but the Canes did it by having the lowest PDO in the league through that point. PDO is shooting percentage plus save percentage. The league average is pretty much 1.000, and Carolina was well off that mark at .970 on New Year’s Day. PDO is a notoriously fickle statistic subject to regression.

From that point on, Carolina ranked fourth in CF% and tenth in HDCF%, but their PDO luck reversed and was 1.011 for the rest of the season, which was eighth best in the league in that time frame. For the entire season, Carolina finished second in CF%, third in HDCF% and 25th in PDO. Again, all of these numbers are at 5v5, score and venue adjusted.

After all that, you might be thinking that the Canes are a dominant puck possession team who can’t be stopped without bad luck holding them down. But Boston does not rank too shabbily in these same categories. The Bruins finished the regular season sixth in CF%, 13th in HDCF% and a reasonable 11th in PDO. Since January 1, they’re actually ahead of Carolina in CF% ranking one spot ahead of them in third. While Carolina has been one of the best five-on-five teams in the league all season, they’re running into a near equal in that respect at this point.

As far as the individual matchups go, everything revolves around Boston’s top line. The trio of Patrice Bergeron with David Pastrnak and Brad Marchand on his wings ranked 10th among line combos in goal scoring at even strength during the regular season. Per The Athletic’s Dom Luszczyszyn, that trio plus the D-man that joins them on the top power play unit, Torey Krug, all ranked top 10 in the league in power play point rate. This is as elite as a line can get and they have a hell of an offensive blueliner playing with them on the job.

Jake DeBrusk is the guy who gets to join Boston’s top liners on the top PP unit. He plays on the second line with David Krejci, and Boston used Pastrnak as the second wing on the second line a fair bit in the second round. Anytime Pastrnak is slated to skate with the second line, that line would get a bump in value. Of the depth lines, Boston’s third line with Charlie Coyle and Marcus Johansson is probably the most dangerous offensive line from the bottom sixes. As for defensemen, Krug is the obvious stud, but Carolina’s Jaccob Slavin is a stud in his own right. Slavin has yet to score a goal this postseason, but he has 11 assists in 11 games.

The Bruins likely have the edge in net this series, though Carolina may not be using their best goalie. Petr Mrazek was their guy to start the postseason, and they played him until an injury forced Curtis McElhinney into net. McElhinney was excellent in his three playoff starts with a .947 SV%. McElhinney has better numbers than Mrazek in the last few seasons, but with Mrazek reportedly healthy, Carolina likely goes with Mrazek. They’ll face Tuukka Rask who has a stellar .938 SV% in 13 postseason starts. Rask easily has the longest history of quality goaltending among these three goalies, so the edge is Boston’s in net though it narrows if McElhinney gets the work.

C. Bradley - F
DET
The Detroit Red Wings think they might have a steal in Chase Bradley.
Bradley wasn't taken until the 203rd pick of the 2020 NHL Entry Draft. Obviously players who go that late are projects at best and many of them don't make it to the NHL, but successful teams get value out of their late round picks. In the past, Detroit drafted Jonathan Ericsson, Henrik Zetterberg, Pavel Datsyuk, and Tomas Holmstrom in the sixth round or later. “For sure, you see some of those players who are drafted in the late round, and the impact they’ve had in the NHL, it’s crazy,” Bradley said in a Zoom media interview after the draft. “It didn’t affect them too much. Being drafted is one of the main things you strive for. It definitely doesn’t change my mindset on anything.” Those players were key pieces for the Red Wings, but in recent years Detroit hasn't had nearly as much success with their late round picks. The Red Wings are hoping to change that recent trend with Bradley though. They like his competitiveness and the steady rate that he's been developing. He's been playing in the USHL, but is set to go to Northeastern to continue his development in the NCAA.
Added 10:37 am (EST)
Added 10:37 am (EST)

P. Kane - F
CHI
Patrick Kane recounted a time when he was a kid and his coach, Darryl Belfry, benched him after scoring a goal to teach Kane a lesson that he took to heart.
Belfry had been trying to get the young Kane to utilize his teammates and had been warning him that if Kane continued to try to do everything by himself, there would be consequences. Finally, in a game where his team was up 5-1 but hadn't scored in a while, Kane decided to carry the puck, got around two opposites and scored. He returned to the bench, gloating, but as a result he spent the last period of the game sitting. "[Patrick] was like, 'After I'm scoring a goal, like, what's wrong with scoring?'" Belfry recalled. "And I said, 'It's not the fact that you scored, it's that this goal is not projectable. Yes, we're in a 5-1 game, we're better than this team, they probably long since given up, so yeah of course you can score there. But what happens when we play against really good teams and now they're trying to take your head off? This attitude and this play is just not going to work." Kane wrote about that moment in a foreword for Belfry's new book, “Belfry Hockey: Strategies to Teach the World’s Best Athletes,” and Kane credited it as helping him to focus on developing his vision and playmaking. It's a lesson that served him well in the NHL.
Added 8:28 am (EST)
Added 8:28 am (EST)

D. Vladar - G
BOS
Daniel Vladar has been loaned to HC Dynamo Pardubice by the Boston Bruins.
Vladar had a 1.79 GAA and .936 save percentage in 25 AHL games last season. He also made his NHL debut in a playoff game on Aug. 26. HC Dynamo Pardubice plays in the Czech Extraliga. With the AHL campaign not expected to start until February, this will allow Vladar to get in some work.
Added Yesterday 3:31 pm (EST)
Added Yesterday 3:31 pm (EST)

P. Danault - F
MTL
Phillip Danault and the Montreal Canadiens aren't currently engaging in contract negotiations.
That's somewhat in contrast to a report from October that Danault and the Canadiens have begun "general discussions" regarding a new contract. Danault won't become an unrestricted free agent until the 2021 offseason, so there's no need for urgency. He'll come with a $3,083,333 cap hit next season and should get a raise after that. He recorded 53 points in 2018-19 and 47 points in 71 games last season. He's also great on the draw and generally highly regarded defensively, having received Selke Trophy votes in each of his last two campaigns. In 2020, Danault finished sixth in Selke Trophy voting with 175 points, putting him between Mark Stone (210 votes) and Anze Kopitar (33 votes).
Added Yesterday 1:36 pm (EST)
Added Yesterday 1:36 pm (EST)

B. Byram - D
COL
Look for defenseman Bowen Byram to star for Team Canada at the World Junior Championship next month in Edmonton.
Byram was selected fourth overall by Colorado in 2019 and he is expected to be a huge part of their future which could begin as soon as the World Juniors are over. But the tournament in December is what he is concentrating on at this point and the coaching staff for Canada considers him the key on the blueline. "I had a conversation with the coaching staff at the start of camp here," Byram said. "We had a good talk about how they wanted me to play and how they wanted me to be on the ice. I think the biggest thing for me was offense. When you haven't played in a while, I think offense is one of the first things that comes back. I've been trying to focus on my defensive game as much as possible and try and give up less opportunities." The Canadian and American teams could struggle early on as they have not had any league action since March save for the Quebec Major Junior League but teams in Europe have been playing, some since September.
Added Yesterday 9:49 am (EST)
Added Yesterday 9:49 am (EST)

H. Lundqvist - G
WSH
Henrik Lundqvist practiced with his Washington Capital teammates for the first time Monday.
Lundqvist was on the ice with his new teammates Nicklas Backstrom, Carl Hagelin, Ilya Samsonov, Tom Wilson, John Carlson and T.J. Oshie. Lundqvist signed with Washington on October 9 after a lengthy and successful career with the Rangers. The future Hall-of-Famer will mentor Samsonov in the Caps net and should see action in plenty of games as the NHL will have a condensed schedule. He was 10-12-3 record with a 3.16 goals-against-average and .905 save percentage last season with New York.
Added Yesterday 9:28 am (EST)
Added Yesterday 9:28 am (EST)

S. Holmstrom - F
NYI
Simon Holmstrom has finished his assignment to Vita Hasten HC of the Swedish HockeyAllsvenskan.
Holmstrom had only a goal and an assist in 11 games, both in a win four weeks ago against Vastera. Holmstrom got in some extra playing time with the NHL and AHL still not playing and that can only help his career. The 19-year-old was taken 23th overall in 2019 and had eight goals and seven assists last season in 46 AHL games.
Added Yesterday 9:21 am (EST)
Added Yesterday 9:21 am (EST)