The only permanent in life is change.

I’m sure he was likely talking about his own situation with rumors of trades or extensions, but the saying applies equally well to how NFL teams shape their roster and create personnel groupings. And one of the biggest shifts we’ve seen in recent years is getting away from the linear depth chart at some positions. For instance, some teams no longer have the RB1 with a line of backups waiting in the wings. Gone are the days of LaDanian Tomlinson getting 313 carries and Jesse Chatman next with 8 like the 2003 Chargers. Some teams, like the New England Patriots, even treat running back like two completely different positions with a separate running down back and passing down back. Same with wide receiver – it’s no longer your WR1, WR2, WR3 etc. but your split end, your flanker, your slot. You see it with the Eagles where there isn’t just a 4th guy who is the “next man up”. When Alshon Jeffrey got hurt it was J.J. Arcega-Whiteside who came in and played 90% of the snaps. But when Alshon was healthy and DeSean Jackson got hurt, it was Mack Hollins who played, not JJAWs. Teams are using niche positions and roles more than ever and the game day roster increasing from 46 to 48 will only further fuel this trend.

Which brings us to tight end. Easily one of the most unique and difficult positions in the game as they are both part of the protection and the attack. But, like many of the other positions, we’ve seen some teams shift away from this idea of one hybrid player with a full workload to multiple different players within the group each having a different role. Some teams may still have a linear depth chart behind an every down tight end but many have shifted away from that. Here’s one of the most glaring examples from this past season.

If you ask any fantasy gamer who the “number one” tight end for the Ravens was last year he’d tell you it was Mark Andrews . And for fantasy purposes, he or she would be correct. Andrews clearly dominated in terms of offensive production. Those people might be surprised to learn, however, that Nick Boyle played 338 more snaps than Andrews. If you look at the game logs, Nick Boyle started 15 of 16 games and Andrews was only on the field to start 4 games. Even Hayden Hurst played the exact same number of snaps as Andrews. Let’s take a look at the usage numbers.

When the numbers are laid out like this it becomes pretty obvious what happened - Nick Boyle was used primarily for blocking purposes and Mark Andrews was clearly the preferred pass catcher. Boyle blocked on just over two thirds of his snaps while Andrews lined up at the slot on two thirds of his snaps. It’s like they were playing different positions.  In terms of Ravens tight ends, the important thing for fantasy purposes isn’t being number 1 on the depth chart or even playing the most snaps but being the preferred pass catcher (which, on a side note, makes Hayden Hurst a little more intriguing given his usage and the fact that the Falcons thought he was worth a second round pick).

In hindsight it may seem obvious but attempting to project the tight end pass game usage for each team (or lack thereof) can have catastrophic effects on a player’s production. We saw this firsthand with Brue Arians having O.J. Howard go from blocking on ~35% of his snaps in 2018 to ~50% in 2019. It truly matters in today’s league of niche player usage and rampant substitutions. So, with that in mind, we’re going to look at a couple situations to keep an eye on based on these usage metrics.

Early buzz this offseason has been that the exit of Delanie Walker opens the door for Jonnu Smith to be a fantasy darling. And it’s true that the top of the depth chart is now wide open. But let’s take that same chart we looked at for the Ravens and look at the Titans pass catching tight ends from this past season.

Anything concerning there?  How about the fact that, despite playing significantly less snaps total and Delanie Walker missing 9 games entirely, the pass catching duo of Walker and Firkser combined for 271 routes run while Jonnu only ran 240?  Or the fact that Jonnu was asked to block on 62.8% of his snaps?  If you had to pick out which of these players was the “Nick Boyle ” of the group, which would it be?

The concern for us is that you immediately want to say “well Delanie is gone so now Jonnu is the starter”. The truth is that Delanie HAS been gone and Jonnu HAS been the starter. Delanie played 1 game in 2018 and 7 last year meaning Jonnu was at the top of the depth chart for 24 regular season games plus playoffs. And he was still asked to block a ton. For us, this doesn’t mean that he isn’t a breakout candidate, but it does mean his usage needs to dramatically change to be a top half fantasy tight end. Sure he’ll play more snaps but he already played 701 which was top 15 for tight ends last season. Guys like Boyle, Kyle Rudolph , Dallas Goedert etc. played 770-790 snaps and didn’t give you much fantasy-wise.

Jonnu’s path to success would be for the Titans to go into the season with him as the every down tight end with drastically better usage in the pass game, Anthony Firkser to come in sporadically as an additional pass catcher, and MyCole Pruitt to help as a blocker. By “drastically better usage” I just don’t mean running more routes instead of pass blocking but running real routes. His average depth of target was only 5.18 yards down field while Delanie (7.80) and Firkser (9.95) were actually getting down field (MyCole Pruitt , the other blocking tight end, had a 4.86 aDot). Screen passes are great but 8.06 yards of YAC is difficult to sustain and, when you look up Jonnu Smith highlights, it’s a lot of screens or underneath routes where the defense forgets about him (and one awesome tip drill catch in the playoffs). If he’s going to be a big part of that offense like people are predicting, then he’s going to have focus on him as.

This is an easy one right? Tyler Higbee broke out at the end of the 2019 season and now he’s a star. I mean, 43 catches for 522 yards and 2 touchdowns in his last 5 games, what more do you want?  Well, based on what we just talked about with the last team, I think you might know where we are going with this. Here’s a quick chart. The first bar shows the percentage of their total plays the player spends blocking. The second chart shows the percentage of their pass plays they block on. 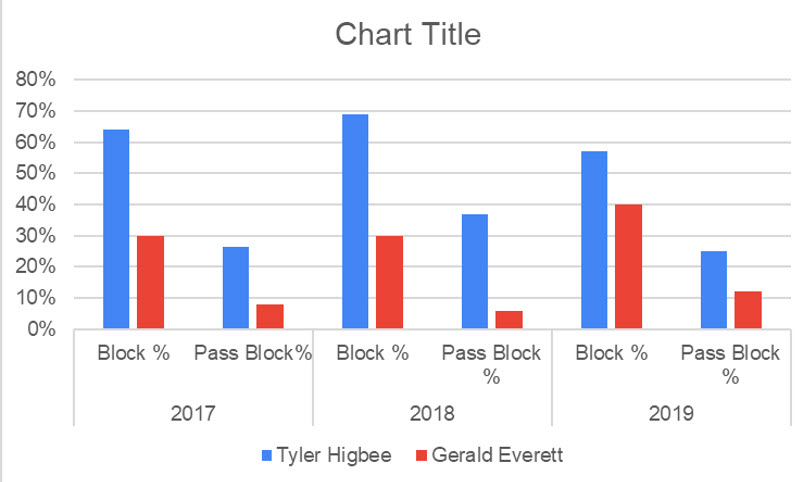 For the entire span of their overlapping career, Higbee has been the blocker and Everett has been the pass catcher. So, we have to ask ourselves – did Higbee truly break out or did Everett just get hurt?  It’s hard to say really – some guys do shift their usage throughout their career but it’s worth noting that, during those five games Higbee was breaking out, Everett played only 4 snaps and Higbee still pass blocked on 20% of the pass plays he was in for (if you remember, Nick Boyle blocked on 19.4% of his pass snaps and 20% is on part with guys like Jeff Heuerman , Darren Fells , and CJ Uzomah). Could it be that Higbee was just hiding in plain sight for three and half years (or 57 games with however many practices) and they just didn’t realize that he was this great pass catcher?  Or is there a reason that Gerald Everett was always the one tapped for the pass catching duties?  Beyond just the fact that Higbee needed Everett out of commission to be a pass-catching threat, it’s also concerning that the Rams have reportedly considered signing Jordan Reed and have had meetings with Brycen Hopkins, who would quite clearly not fall on the blocking side of the tight end tree. If they were going to transition Higbee to a more attack heavy role, you’d think they would look to beef up the blocking side of their tight end group no?

In the end, drafting Higbee is going to be a gamble, not just because of this, but because every top five tight end except for three over the past six years has had 100+ targets (the exceptions being Antonio Gates , Jimmy Graham , and Mark Andrews who all had 95+ targets with 10+ touchdowns). Only four teams over the last five years have had three players who all got over 100+ targets meaning that 97.5% of teams over that span have had two or less guys get 100 targets. And last time I checked Brandin Cooks , Cooper Kupp , and Robert Woods are all still on the team. So our advice at this point is to roll with Higbee if he falls to you but don’t go too far out of your way to reach for him because he has factors limiting his ceiling.

Tight end has been a nightmare for the Houston Texans for some time now. I mean, in Week 1 of 2017 season all three of their tight ends got concussed and, after only two years, none of those players were on the team any more. Their solution over the last couple years was to sign Darren Fells , draft Jordan Akins (round 3) and Jordan Thomas (round 6) in 2018, then draft Kahale Warring (round 3) in 2019 which makes up their current tight end group.

Up until now this position group has had little interest to us but, with the premier target hog DeAndre Hopkins recently being jettisoned to the Cardinals, the Law of the Distribution of Targets would tell us that someone else needs to pick up the slack. So, let’s take a peek. Here’s how they fared in PPR leagues last year.

Maybe doesn’t favor him so much. And once you go a bit deeper and start looking at stats like average depth of target which tells you who getting vertical and taking big chunks (6.8 yards for Akins vs. 5.4 for Fells) it looks more and more like they actually prefer Akins as a pass-catcher but Fells simply ended up with more touchdowns (7 vs. 2). Fells may have a knack for the red zone so that could be sustainable, but the reality is his usage as a blocker and his shallow route tree limits his upside.

Though the verdict might be that Akins is probably your best stab of the three currently on the roster, it’s the fourth name that is most appealing to us: Kahale Warring . Part of it is that we’ve seen enough Fells, Akins, and even Thomas to know that the upside there is limited, and Warring is the mystery box we’ve yet to see. On the upside, he’s a 3rd round pick who profiles as the best pass catcher of the group given his speed and agility metrics. On the downside, he was placed on IR last year with hamstring and concussion issues and the Texans chose to activated Jordan Thomas to return from IR midseason rather than him. He’s more of a dynasty play than redraft but he’s certainly someone to keep an eye on that could fill the pass-catching role on a team that suddenly has an abundance of targets. If the Texans go back to the tight end well in the draft again though, all bets are off.

Statistics for this article were provided by the author, Andrew Cooper, with help from ProFootballFocus.com, PlayerProfiler.com, ProFootballRefence.com, and AirYards.com. Follow Andrew on Twitter @CoopAFiasco.