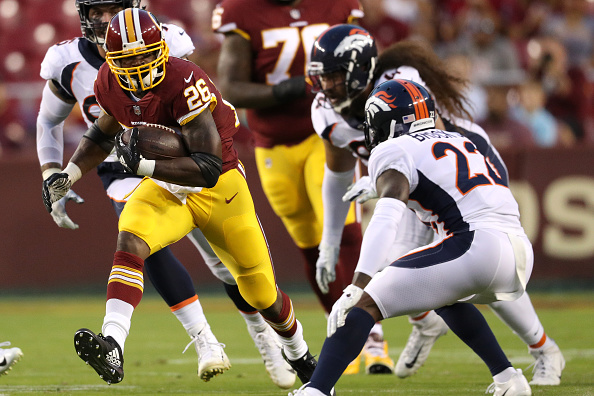 Tyrod Taylor left Thursday’s night preseason game with a dislocated pinky finger. He injured his finger on this play:

I’m not a doctor, but I can say this did not look good for Tyrod Taylor . pic.twitter.com/Q64yKT1Khm

While this may put Week 1 in some doubt for him, the injury is not as bad as it looked when it happened. Baker Mayfield came into the game after the injury and while the numbers don’t reflect it, he was actually pretty good. If Taylor is to miss Week 1, Mayfield would likely get the start.

Dalvin Cook made his preseason debut on Friday night. This was Cook’s first game action since tearing his ACL back in October. He only rushed the ball twice for one yard, but this is a great sign that he is trending towards being ready for the start of the season. He may play a bit more in the final game as a tune up for the regular season, but the Vikings will be careful with the second-year back.

According to the Houston Chronicle, running back D’Onta Foreman will likely start the season on the physically unable to perform list. This means that Foreman will miss at least the first six weeks of the season which is unfortunate news, but not completely unexpected. Foreman was on the verge of a breakout last season when he tore his Achilles and because the injury came so late, the recovery is bleeding into this season. Foreman is an interesting stash in most formats because if he can return to form, he is a dynamic talent with a starter in Lamar Miller in front of him that is past his prime.

Adrian Peterson rushed for 56 yards on 11 carries for the Redskins in their third preseason game. This showing is further proof that he is the starter now and going forward and he had a pretty good effort behind a healthy Redskins offensive line. Peterson is a nice target late in drafts because of the low price and upside in the Redskins offense.

According to Jeff Howe at the Athletic, Rex Burkhead could be a “focal point” of the offense in New England this season. Burkhead will need to get healthy first as he has been dealing with a minor knee tear that has the back sidelined right now. It is hard to believe the hype on Burkhead considering the Patriots having drafted Sony Michel and Bill Belichick's propensity to screw with fantasy owners by screwing with his running backs. This report will likely drive up Burkhead’s value a little bit, but that may be too rich for fantasy owners like me.

Evan Engram left Friday’s game with a potential concussion. This is not great news, but hopefully he can make it through the league’s concussion protocol before Week 1.

Cam Newton also left with a concussion for his preseason game on Friday, but was able to pass league protocols and return to the game.

The Chicago Bears will likely rest the majority of their starters on Saturday for their third preseason game versus the Chiefs. The Packers are reportedly doing the same thing and while this does not affect much, it is good to know if you are playing DFS this preseason.

Josh Gordon has been cleared to participate in walk throughs.

Is Alfred Morris the starter in San Francisco with Jerick McKinnon hurt? Morris is reportedly going to start the third preseason game with McKinnon ailing and he does have a lot of experience in the Shanahan offense from back in his Washington Redskins days. Morris could end up being a sneaky back this year in fantasy especially early on if these injuries linger for McKinnon.

Can Marcus Mariota rebound from a disappointing 2017? Mariota has not shown the progression that many expected from him over the last few seasons, but looked good in his only drive in the second preseason game. He has a blossoming Corey Davis and Rishard Matthews should be ready for the start of the season. With the addition of Dion Lewis , Mariota has all the talent needed around him to succeed.

What does Calvin Ridley look like versus the Jaguars corners? No matter who lines up against Ridley from the Jacksonville side of the ball, he faces the most talented corner and secondary that he has ever seen. Can Ridley beat these Jags in coverage? I tend to think he still needs some polish, but the skills are there.

Can Christian Kirk secure a starting role in Arizona? Kirk has looked very good in camp so far, but his natural position is working out of the slot, which is the occupied by future Hall of Famer Larry Fitzgerald . The Cardinals don’t have a ton of talent in the receiver corps, so they may not have a choice but to move one of them outside.