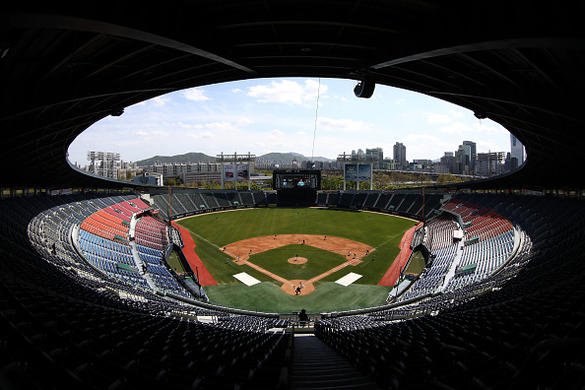 With live sports on everyone’s mind, the KBO (Korean Baseball Organization) could fill a void for many baseball fans. Not only will there be daily fantasy sports available on Draft Kings and Fan Duel, but this announcement by ESPN may whet the appetite.

Taking a crash course in the KBO over the last few days reveals some trends, teams and players of interest. This will focus on all of these facets of the league. Defending champion Doosan Bears look to defend their title along with finishing atop the regular season in 2019:

Like the major league baseball, the KBO will play a shortened season meaning mayhem could ensue. Beneath the records, some intriguing numbers before looking at the best options on each team for fantasy purposes.

Since on-base percentage in the KBO represents a trend in approach, it’s league average OBP of .337 sits 14 points above the MLB percent when comparing 2019. Once again, four teams finished with an above average team OBP compared to league average:

Using a reduced flight baseball, the KBO curtailed its home run friendly atmosphere from 2018 cutting runs scored by over a run on average helping pitchers rebound. Again, since the game in the KBO does not necessarily reflect the game in America, it will feature pitchers throwing to contact with sinkers and off-speed pitches yielding fewer strikeouts. Still, using last year’s statistics, here’s the teams who kept their run average per nine innings below the league average of 4.61:

With more contact comes more traffic on the bases. The KBO average WHIP of 1.400 finished higher than the MLB’s 1.33 mark from last season. But its average ERA ranked below at 4.17 compared to a 4.51 ERA in the majors.

Noting the KBO could be akin to old-time baseball with power found at the corner infield and outfield positions with defense minded middle infielders. Pitchers work on efficiency and would align to the ideal preached in Bull Durham:

Strikeouts are boring, besides that, they're fascist. Throw some ground balls. More democratic. -Bull Durham pic.twitter.com/j2INfmQVu4

In an effort to provide a crash course in the KBO, team previews with player’s of interest and notes on the foreign players to focus on will be tantamount to any DFS success. Going in alphabetical order for the 10 teams, here’s the cliff notes on the KBO:

Taking a chance with the rotation, Brooks could be a breakout performer in the KBO. Brooks owns upside in regards to strikeouts armed with a four-seam and two-seam fastball along with his slider. Perhaps he can work without using his change as often in a new league. Gagnon will look to rebound on foreign ground and benefit from limited flight baseballs. If his fastball improves and the change-up takes, Gagnon could be above average. Tucker, known more for being the older brother of prospect Kyle fared well in his 95 game sample last year hitting a robust .311/.382/.479 with 50 runs, nine home runs and 50 RBI in only 357 at-bats. Yang anchored the rotation last year winning 16 games with 163 strikeouts in 184.2 innings with a 2.29 ERA and 1.07 WHIP. Choi slashed .300/.413/.485 with 65 runs, 17 home runs and 86 RBI in 136 contests for the Tigers.

For the first time in these team previews, the Korean players take center stage on offense with the Heroes. Many will recall Park as a failed experiment by the Twins but he led the KBO in home runs last year with 33 while hitting .280/.398/.560. His willingness to drive the ball to all fields plays well in Korea with many pitchers working to the outside of the strike zone trying to induce pulled ground balls. Kim represents an exciting skillset leading the league with 33 stolen bases, hit .307/.389/.491 and hit 19 home runs. Think of him as the KBO version of Trea Turner . Given the lack of upside at shortstop, he will be a popular DFS target in early contests requiring players by position. Lee compares to Ichiro and even wears the same number (51) in games. At age 20, Lee slashed .336/.386/.456 with a 7.3 walk percentage versus a 6.3 percent strikeout rate. He also racked up extra-base hits with 31 doubles, 10 triples and six home runs leading to 91 runs along with 68 RBI while stealing 13 bases. Pretty, pretty, pretty good.

Trying to climb out of last place, the Giants inked Sampson to anchor the rotation. But, he will miss the opening of the season due to a family illness. Sampson could do well upon his return but how long will he need to be ready to pitch? His low 90’s fastball with a slider could produce strikeouts in Korea. Speaking of strikeout, Straily will take the mound on Opening Day for Lotte. He tried to work at the top or above the strike zone in the states which goes against the grain in the KBO. So, Straily could rack up strikeouts with his four-seam fastball elevated with a plus-change but if teams foul off pitches up in the zone, his pitch count could escalate quickly. Machado joins the Giants coming off a .260/.371/.480 slash in Triple-A Iowa last year with 17 home runs and 65 RBI. If he plays solid defense and the strikeout rate dips, he could benefit from a fresh start.

Looking to make a push in the standings, the Dinos added frustrating Altherr to its outfield. Not sure which iteration of Altherr lands in the KBO, but in a league predicated on contact, his power and speed combination could be effective. Rucinski went 9-9 with a 3.05 ERA, 1.18 WHIP, and 119:45 K:BB in 177.1 innings. Wright profiles to succeed with health in the KBO since he works in the strike zone with a lower 90’s MPH fastball.

Coming to the KBO from Japan, Buchanon brings a low strikeout rate but could do better with his upper 80’s MPH fastball, slider and change with a reduced flight baseball. Ben Lively racked up 58 strikeouts in 57 innings last year with a 3.95 ERA and 1.12 WHIP in nine starts with Samsung last season. Saladino could play all over the infield for the Lions but will his bat play well in this climate? Hak-Ju Lee hit seven home runs with 15 stolen bases and a .262 average last year. Won-suk Lee hit 19 home runs with 76 RBI but a .246 average in 2019. Baek will toe the rubber on Opening Day but his 8-10 record with a 4.24 ERA and 1.36 WHIP with only 82 strikeouts in 157 innings giving up 17 home runs last year does not bode well.

Much of the Wyverns' hope lies in KIngham taking over as the ace of this staff. Kingham pounds the strike zone and may do well in the KBO with past major league pedigree. Pinto also could be a hit with velocity upside if he can throw strikes. Romak slashed .276/.374/.508 with 86 runs, 29 home runs, 95 RBI and 73 walks in 137 games last year. Park went 8-11 last season with 100 strikeouts in 144 innings but needs to reduce traffic on the bases.

Since there’s a limited amount of data available, perhaps the first week should be focused primarily on cash games until numbers settle in and lineups take shape. Be sure to stay with Fantasy Alarm to remain ahead of the competition.