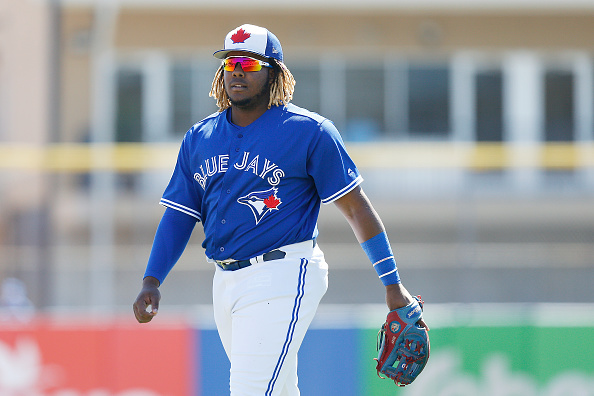 After seeing Vladimir Guerrero Jr. play in person, a chip off the old block applies. Guerrero Jr. proved to be a man amongst boys at Double-A last year racking up 19 doubles, 14 home runs and 60 RBI in 234 at-bats with a robust .402/.449/.671 slash line. His average fell to .336 in only 30 games at Triple-A, but Guerrero Jr. still produced seven doubles, six home runs and 16 RBI with an on-base percentage of .414 and a .564 slugging percentage. Suffice it to say, he can rake.

If Guerrero Jr. will make the most of his major league debut, his owners will hope he carries over the fly balls produced in Double-A and not the high rate of ground balls in Triple-A, though it’s a small sample size.

Here’s how his spray chart of line drives and fly balls from 2018 across all levels looks courtesy of MLBfarm.com: 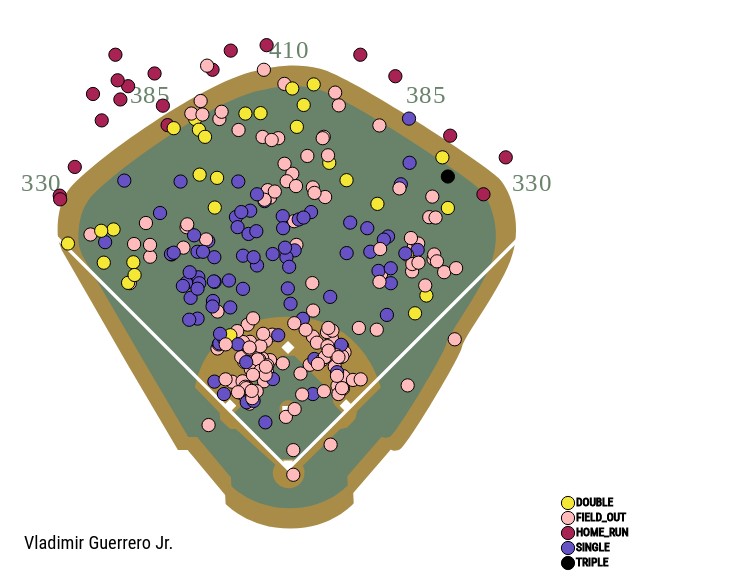 With Guerrero Jr. out for the first couple of weeks due to a left oblique strain, how he hits upon return will determine his arrival time in Toronto, along with team control options. Whether or not his injury will be convenient for arbitration stipulations, obliques can sap power. Due to this, Guerrero Jr.’s projections shifted and reflect three layers of outcomes based on health and games accrued in the majors:

Vladimir Guerrero Jr. rates as baseball’s top prospect due to his ability to attack baseballs and hit them hard to all fields, akin to the J.D. Martin ez breakout. His ceiling will be tremendous going forward, but for this year, it will rely on games played in the majors along with how his oblique responds to treatment. His average draft position ebbed back with the injury news. Over the last week (March 13th-through-March 20th), Guerrero Jr.’s the eighth third baseman selected at pick number 59.91 overall with a range of 39-to-91. Keep this in mind for redraft leagues. It makes sense to target Anthony Rendón and Eugenio Suárez ahead of him. In fact, it would take Guerrero Jr. to achieve the ATC projection to break even at his current cost. Owning the “it” guy wins draft boards, but the overlooked veterans like Mike Moustakas may outproduce them.

Trying to predict when Toronto will open its pipeline of prodigies to the majors also clouds the stock of Guerrero Jr., but the talent could be worth it.