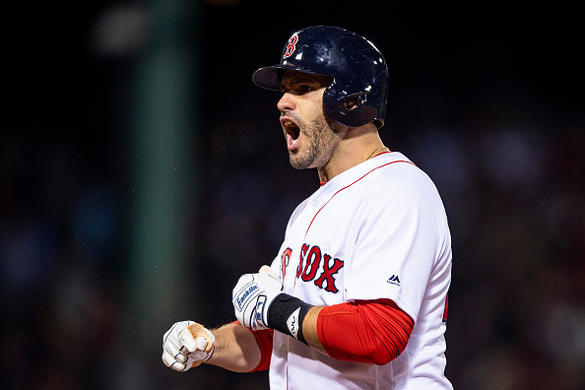 For the impatient free agency crowd, it took until February last year for power hitter J.D. Martinez to sign with the Red Sox. Although many feared he could not carry over his ridiculous power totals from 2017, Martinez hardly missed a beat racking up 43 home runs with 130 RBI over 150 games with a .330/.402/.629 slash line. Only Christian Yelich also scored at least 100 runs with at least 100 RBI and an average over three hundred.

Martinez garners headlines for his attention to detail watching video of his swing and at-bats in an effort to fine tune the process. It appears more players should be following his lead. He became only the fourth player in Boston history to hit at least .325 with 40-plus home runs and 125-plus RBI joining Ted Williams, Jimmie Foxx and Mo Vaughn. Martinez also led the majors in multiple hit games (59). Here’s a list of some of his other end of season rankings:

K. Yates - RP
SD
Kirby Yates participated in his first summer camp workout on Tuesday night.
Yates was delayed arriving to Padres camp due to a positive COVID-19 diagnosis within his family, but the right-hander passed through the necessary intake testing protocol and can now get himself prepared for MLB's planned 60-game regular season. He should be among the first closers off the board in fantasy drafts this summer coming off a league-leading 41 saves and 1.19 ERA over 60 2/3 innings in 2019.
Added 8:21 am (EST)
Added 8:21 am (EST)

R. Helsley - RP
STL1
Cardinals GM John Mozeliak first brought up Ryan Helsley's name when asked about the team's closer's role on Tuesday.
Jordan Hicks will open up on the injured list, so the gig is wide open. Giovanny Gallegos seemed likely to have the inside track at the beginning of the season, but he's yet to arrive in Cardinals camp. Carlos Martinez, who just arrived Tuesday, had been penciled into the rotation, but he's also an option to close if he's not far enough along to start. Helsley also could have been an option to start, but the Cardinals have showed no signs of going that route. He showed closer-type stuff while mostly pitching in low leverage situations last year.
Added Yesterday 8:45 pm (EST)
Added Yesterday 8:45 pm (EST)