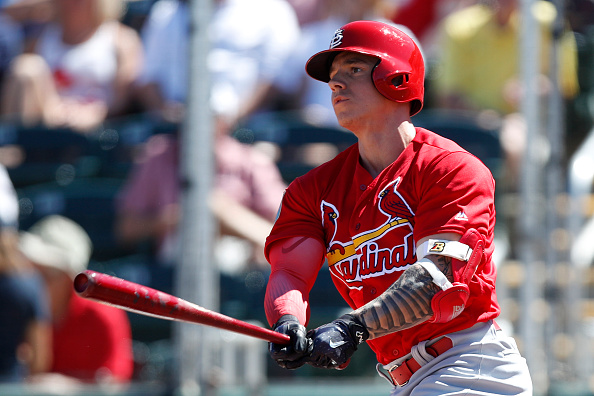 I remember being in Jupiter this Spring, and the fan reaction was the same in just about every case.

“That kid is a ballplayer ? He looks like a bodybuilder.”

Yep, that’s what we’re about to hear in the big leagues also. Tyler O'Neill 's physique looks like he may have participated in Wrestlemania last weekend, but make no mistake about it this kid has some serious power and in fantasy, we should take notice.

O’Neill has hit 30 home runs two of the past three seasons in the minor leagues. If you’re unfamiliar with how he got to St Louis in the first place, he was traded for Marco Gonzales by the Mariners to the Cardinals, and proceeded to hit 12 homers over just 37 games with Triple-A Memphis.

This year in Memphis ? More of the same. Six bombs in just 12 games. So what’s the catch here? Is John Cena a better add this week than O’Neill ? I mean where will O’Neill even play in this crowded outfield with Ozuna, Fowler, Pham and Bader ? Those are all very good questions and I don’t know if I even have the correct answer here but let’s consider the previous scenarios with the Cardinals call ups.

2016. Aldedmys Diaz a relatively unknown player out of Cuba (with no clear path to the big leagues) makes a June debut with the Cards and finishes 5th in the Rookie of the Year voting hitting 17 bombs posting a .300/.369 Avg/OBP slash line. Diaz in fantasy was a huge pickup that season. Yet…

2017. Diaz struggles out of the gate. Cardinals add Paul DeJong to the big league roster. DeJong pulls a Diaz, finishing 2nd in the NL Rookie of the Year voting smashing 27 bombs and becomes yet another Cardinals off the radar player we had never heard about.

2017. Tommy Pham fails to make the big league roster. Pham gets called up in May, pushes Randal Grichuk AND Stephen Piscotty aside and becomes an MVP candidate. 23 bombs 25 steals for Pham. Who was he before the callup ? A nobody.

Let’s get real here for a minute. O’Neill doesn’t walk much. O’Neill would not be considered an “elite” defender. O’Neill has already been hurt once this year, an oblique issue this spring. That being said, let’s ask ourselves “what if?” O’Neill through 12 games this season has cut his whiff rate to under 20%, and has improved his K-rate since he joined the Cardinals organization. It’s a strange fit, I must admit. There was some belief the Cards would flip O’Neill to the AL this offseason but that never happened. Now he’ll get his chance at the very least against some left-handed pitching.

O’Neill may not have much of an opportunity to shine, and his value may be tied to the groin injury to Pham, but there is some potential here. It’s also unclear if O’Neill can play some first base (which he hasn’t to date in the minors), but Jose Martinez has certainly looked the part. This is just one of those situations where in fantasy, you just have to take a shot here at very little risk to see how it plays out. The Cardinals have a track record of riding the hot hand, and in a worst case scenario, you can use O’Neill in WWE DFS. Does that exist?

I’d add O’Neill in every National League Only league, every 15-team mixed league, and if you can afford to, some deeper-rostered 12 team leagues although, it’s hard to imagine everyone running to the wire to add him in that format today.  I said on SiriusXM, this kid will hit 30 homers in the big leagues one day. Will it happen this season ? Time will tell.