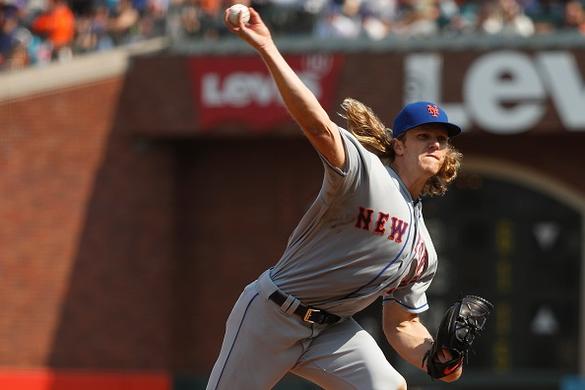 From the top of the playbook:  Today’s main MLB slate will look a little different depending on the site you play on.  With the CHC/WAS game being postponed last night, the evening game scheduled tonight has been removed from the DK slate, and FD has moved their main slate up an hour in order to include it.  Due to it being the second game of a doubleheader, it may be tough to figure out the projected lineups, and therefore won’t try to play the full guessing game.  My thoughts with that game will be listed under Hamels and Rizzo in the playbook.  Similar to last night, this slate is best geared for gpp’s and some NFL satellites, as leaving salary on the table, or going the stars and scrubs route once again looks to be a great route. 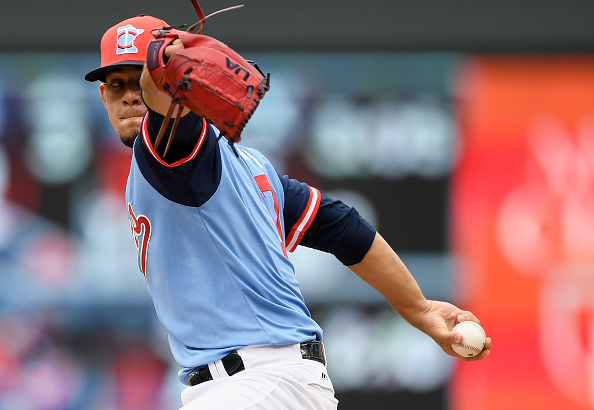 Five Second Cheat Sheet:  Noah Syndergaard vs the field tonight for pitching, with Cole Hamels in play on FD.

Thirty Second Cheat Sheet: I don’t think you need to take Noah tonight, and could go cheaper with any number of pitchers in order to fit in some bigger bats.  Clay Buchholz has been on fire at home, while José Berrios has the K upside vs the Royals.  Walker Buehler and Kyle Freeland could make a game in Coors a pitcher’s duel, while the wind could be a major factor for Matt Shoemaker and James Shields tonight.

It’s pretty wide open tonight in regards to routes to take for pitchers, as I feel September is more for gpp’s than cash style games.  In addition to those listed above, Gio González makes his Brewers debut, while Julio Teherán could be in play as well tonight.  If not on Berrios, I don’t mind the punt with Jorge Lopez over Felix and Lynn.

Our pitching coach, James Grande, likes Thor if paying up, while Berrios and Buehler would be his mid-priced targets.

Our projections don’t have Hamels projected yet, but Thor of course leads the pack, followed by Berrios, Gio, Clay, and Lance Lynn .  Felix is the top FD value play, while Gio leads the way on DK.

Five Second Cheat Sheet: Another wide open slate in terms of hitting, and roughly comes down to what team or teams you want to target.

Thirty Second Cheat Sheet:  The game in Coors checks in with the highest projected game total, but the Twins, Brewers, and Cubs (FD) all are hovering around the five implied run total mark.  There’s also the matchup of struggling pitchers in the NYY/SEA game, and cheap bats from the Giants, Mets, and White Sox if looking to be different.

Catcher: No real value plays out there tonight, but may not need it with no high priced pitchers taking the mound.  Gary Sánchez and Mike Zunino would be my top targets outside of stacks.

First Base: I do like Jesus Aguilar over Paul Goldschmidt , but Anthony Rizzo could be a solid FD pivot, as well as cheaper options like Luke Voit and Matt Davidson .

Second Base:  Brian Dozier and DJ LeMahieu are in solid spots, while Jeff McNeil and Travis Shaw lead the list of pivot options listed in the playbook.

Third Base: I like paying up at third, and would suggest one of the possible three options at Coors in Justin Turner , David Freese , and Nolan Arenado .  Plenty of other pivot routes provided in the playbook depending on your team targets. 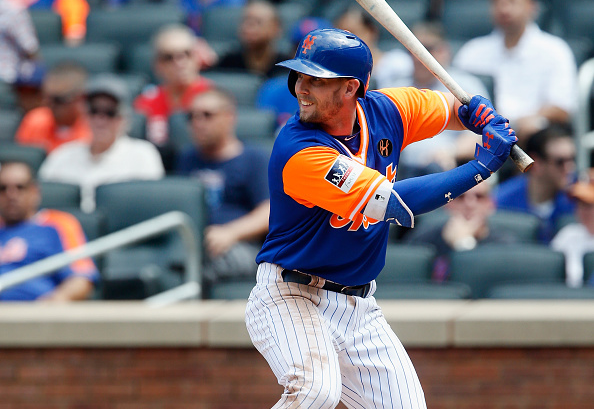 Shortstop: I’m leaning Trevor Story over Manny Machado , but both work best in their team stacks.  Andrelton Simmons is on fire, and some other cheaper, gut plays are listed in the playbook.

Outfield: Mike Trout and Shohei Ohtani could both go deep, while Christian Yelich leads the way in a Brewers stack.  Jay Bruce is close to a must play if going the FD cash game route, but his other teammates in the OF are a little overpriced on DK for me.  Eddie Rosario may be lower owned than Giancarlo Stanton and Brett Gardner , and feel like all three work as pivots off those listed above, as well as the options at Coors.

Our hitting coach, Tom Vecchio, likes Yelich and Turner if paying up, while Rosaria and Shaw would be his mid-priced targets.  Calhoun and Voit are his top value plays.

Our projections have the Trout leading the way over Dozier and Stanton, while Yelich, Grandal, and Turner are all towards the top as well.  Gorkys Hernández checks in as the top FD value play.

If playing gpp’s, your best approach is stacking.  Pick a game, or two teams that you think will blast off, then go all in on them.  Yes, entering your cash lineup, or another type of lineup can cash in a gpp, but if looking to finish in the top 1%, you need to hit with a stack. I mentioned my team targets, as well as some four pack stack routes in the playbook, but I do like the Brewers and Angels, and will likely fade the KC/MIN game, and look towards the Giants and Mets for value.

Our stacking coach, Jon Impemba, likes the Brewers as his top stack, and the Mariners if looking to be different. 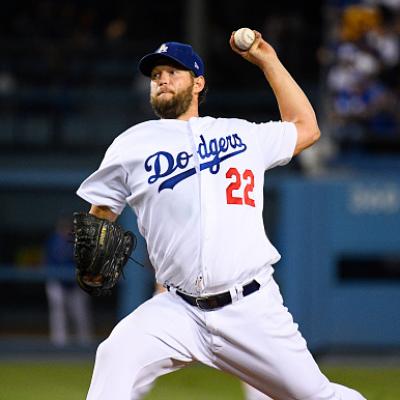 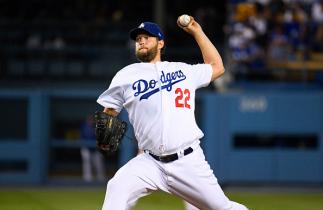 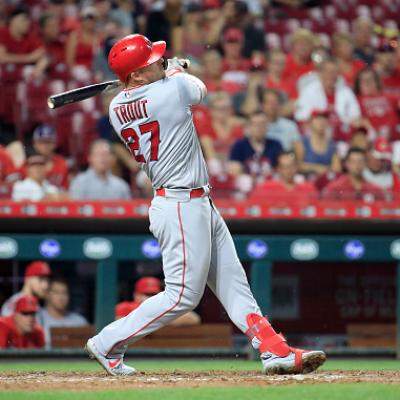 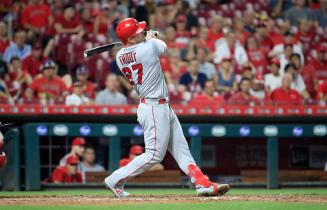 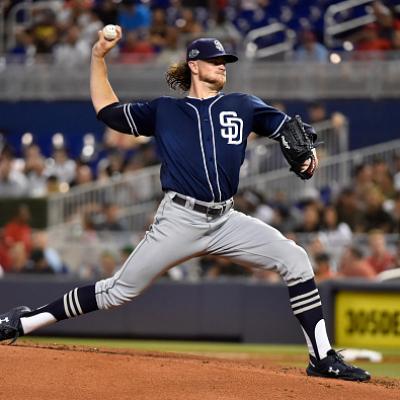 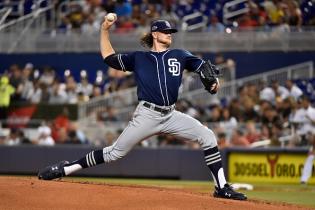 MLB Kiner-Falefa up to second in lineup on Saturday

E. Hosmer - 1B
SD1
Padres activated 1B Eric Hosmer from the 10-day injured list.
Hosmer has battled stomach issues since the beginning of the season, but is feeling well enough to come off the IL for Saturday's contest against the Diamondbacks. He's starting at first, as he usually does, and he's hitting fifth against Arizona. Hosmer was off to a solid start; driving in seven runs in his first three contests. Abraham Almonte has been sent down in a corresponding move.
Added 7:04 pm (EST)
Added 7:04 pm (EST)

A. Almonte - CF
SD
Padres optioned OF Abraham Almonte to their alternate training site.
Almonte is being sent down to make room for Eric Hosmer, who is coming off the injured list for Saturday's contest against the Diamondbacks. The outfielder will likely be an up-and-down player for San Diego this summer with no fantasy appeal.
Added 6:31 pm (EST)
Added 6:31 pm (EST)

M. Semien - SS
OAK1
Marcus Semien went 2-for-4 with a homer, two runs scored, a homer and a stolen base in Saturday's win over the Astros.
Semien was one of the few Athletics who had any success against Framber Valdez on Saturday, and it came early with a homer in the bottom of the first to give Oakland a 1-0 lead. He also singled, and was able to pick up his first steal of the season. After a breakout 2019 season, Semien has struggled in 2020 with a .209 average and .530 OPS, but it's beyond reasonable to expect him to rebound over these final six-plus weeks.
Added 6:29 pm (EST)
Added 6:29 pm (EST)

M. Chapman - 3B
OAK
Matt Chapman went 2-for-4 with a homer and two RBI in a victory over the Astros on Saturday.
Chapman gave the Athletics a 2-0 lead with a fielder's choice in the sixth, but the big blast was a solo shot that made it 3-0 in the eighth inning off of Nivaldo Rodriguez. That gives the star third baseman six RBI on the season and it's the third round-tripper for the 27-year-old. He's certainly hitting for power, and while Chapman won't hit .300, it's reasonable to expect that .230 average to rise over these next couple of weeks.
Added 6:29 pm (EST)
Added 6:29 pm (EST)

L. Hendriks - RP
OAK1
Liam Hendriks was able to pick up a save despite giving up a run on Saturday against the Astros.
Hendriks gave up a double to Kyle Tucker, and Tucker came around to score on a single by Alex Bregman. This happened with the Athletics up by three, so while it hurts the right-hander's ERA -- it goes up to 2.16 -- it didn't affect his chances of picking up his fifth save of the season. Hendriks remains one of the top closers in baseball for a team that looks to be one of the best in the sport. Good combo.
Added 6:28 pm (EST)
Added 6:28 pm (EST)

F. Valdez - RP
HOU
Framber Valdez allowed just one earned run over seven innings with nine strikeouts, but was still credited with a loss on Saturday against the Athletics.
Valdez also allowed an unearned run, but this was a dominant start for the 26-year-old. Unfortunately for him, the Astros and anyone who started the right-hander, Frankie Montas was better, so Valdez takes a hard-luck loss. Hard-luck loss seems like an understatement in this case. Still, he helped players in all of the other categories, and the right-hander was also outstanding in his previous start against the Angels. He's absolutely worth starting on Friday when the Astros take on the Mariners.
Added 6:28 pm (EST)
Added 6:28 pm (EST)

A. García - RF
MIL1
Avisail Garcia (wrist) is back in the starting lineup for Saturday's game against the Reds.
Garcia missed Friday's game after being hit in the wrist, but it was just precautionary. The outfielder is hitting fifth and playing center field against Anthony DeSclafani and the Reds.
Added 6:21 pm (EST)
Added 6:21 pm (EST)

Y. Alvarez - LF
HOU
Yordan Alvarez doubled twice in three plate appearances during an intersquad game on Saturday.
Alvarez has not been able to play this year for undisclosed reasons, and just return to baseball activities on Friday. It's nice to hear that the outfielder is able to get off to a hot start; even in games that mean nothing. It's being reported that Alvarez will need at least two weeks before being ready to return, so it appears that near the end of August is the ETA for the 2019 Rookie of the Year.
Added 6:17 pm (EST)
Added 6:17 pm (EST)