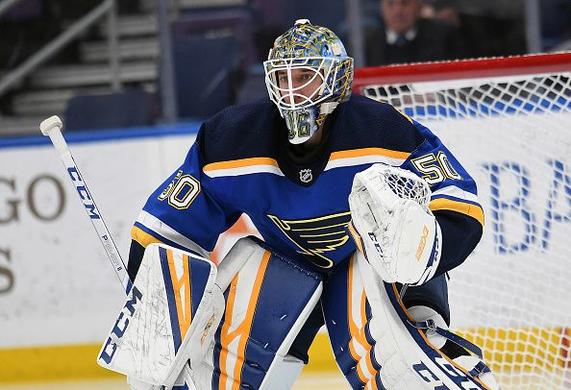 The Western Conference Finals of the Stanley Cup Playoffs will begin tonight in San Jose as the Sharks host the St. Louis Blues. The Sharks are -135 favorites in the series. The Sharks finished second in the Pacific Division with 101 points, while the Blues finished third in the Central with 99 points.

If you’ve watched a single Blues game this postseason, you’ve undoubtedly heard about how they turned their season around. On January 2 they were dead last in the league, yet here they are in the final four. Their turn around didn’t really start until February when they won their first 10 games after the All-Star break.

From February 2 to the end of the regular season St. Louis dominant. At 5v5 (score and venue adjusted) they were sixth in the league in CF% (Corsi For percentage) and second in the league (and first in the West) in percentage of the high danger scoring chances generated in their games (HDCF%). Said another way, they generated the fourth most high danger chances and allowed the seventh fewest.

While St. Louis is arguably the hottest team in the league over the last few months, the Sharks have been pretty damn good themselves in that time frame. From February 2 on the Sharks were seventh in CF% and eighth in HDCF%. Over the course of the full season they were first in CF% (St. Louis was 10th) and fourth in HDCF% (St. Louis was second). San Jose deserves credit for being consistently above average at 5v5 all season.

When it comes to special teams, these teams are evenly matched. When you add up power play and penalty kill success rates, San Jose finished fourth in the league at 104.42 percent and St. Louis was eighth at 102.57 percent. San Jose is a bit better with the power play, and St. Louis is better on the kill.

The real difference between these teams (other than San Jose’s year-long 5v5 excellence) is goaltending. Jordan Binnington got his first start for the Blues on January 7. To that point St. Louis ranked third-worst in save percentage. San Jose was just as bad as they ranked just one spot ahead of St. Louis in SV%. From January 7 on, the Blues ranked fourth in SV% while san Jose ranked 30th.

Moving on to the individual matchups, it’s not surprising that the teams in the conference finals both go three deep with their forward lines. San Jose’s lines are a bit more settled than St. Louis’, but here are their most used line combinations from their last three games courtesy of Left Wing Lock.

San Jose’s best possession line in the playoffs has been the Logan Couture line. Their best defensive pair has been Brent Burns and Marc-Edouard Vlasic. That fivesome plays a lot together both at home and on the road. If picking Blues skaters in a DFS contest, you’d like to pick Blues that won’t see much of that quintet at even. At home the Couture line tends to see the opposing top line, so the Tarasenko line will draw the tough matchup there. They may well draw the same matchup primarily in St. Louis, but Ryan O’Reilly’s line should take a share of the shifts at home against the Couture line.

Both of St. Louis’ top six lines are excellent possession units, so the Couture line may draw tougher matchups all series long. Of the top six lines for the Sharks, Tomas Hertl’s line could be poised to do more damage. The Blues are strong up and down the lineup in terms of possession, but if they have a weakness, it’s the heavily used defensive pair of Jay Bouwmeester and Colton Parayko. They tend to see the opposing second line in home games, which sets up well for the Hertl line, and the Hertl line saw the most of Colorado’s second D pair at home in the last series.

As for the bottom sixes, the advantage belongs to St. Louis’ third line of Tyler Bozak, Robert Thomas and Pat Maroon. That line was excellent in the series against Dallas and had a healthy nine combined points. The line also gets some run together as the second power play unit, which gives them stack appeal in DFS.

On the blue line, you know about San Jose’s stud defensemen Burns and Erik Karlsson. St. Louis has their own stud D-man in Alex Pietrangelo. If you watched Game 7 of the STL-DAL series, you know St. Louis like to run things through the point, which is why Pietrangelo was tied for the team lead in shots on goal in the series. If there’s a sneaky D-man in this series, it’s St. Louis’ Vince Dunn. Dunn can carry the puck well for a D-man and sees work on the second PP unit. 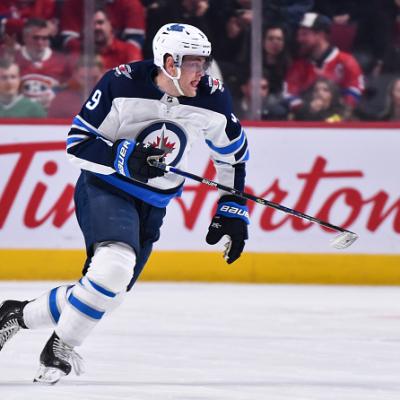 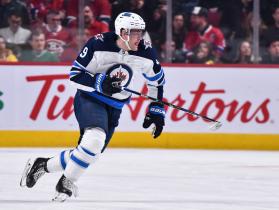 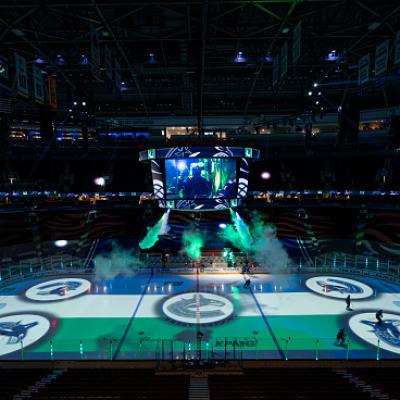 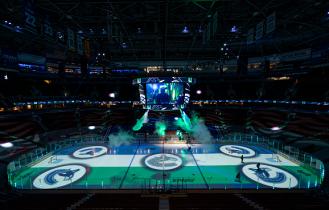 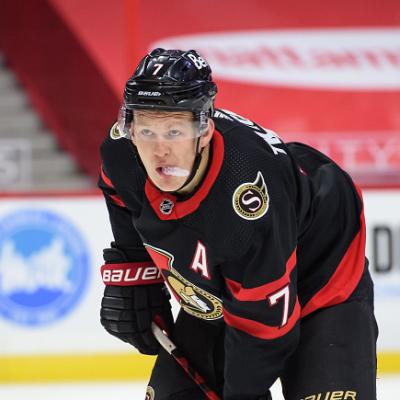 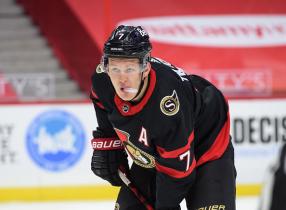 NHL Hats off to Brandon Sutter Monday vs. Ottawa

NHL Matt Murray gets roughed up in Vancouver

NHL Alexandar Georgiev will get the nod on Tuesday

N. Hoglander - F
VAN
Nils Hoglander picked up an assist Monday in Vancouver's 7-1 shellacking of Vegas.
And oh what an assist it was! Hoglander dove on the ice and swiped the puck over to Tanner Pearson who made no mistake to make it 3-1 Vancouver at the time. “He’s a smart little player,” coach Travis Green said. “Works extremely hard and isn’t afraid to go to hard places to win a puck battle. He might have games where he misses some little details in our structure, but that’s going to happen with a young player. You have a lot of time for them when they compete hard and want to get better.” Hoglander has two goals and four points in eight games to date.
Added 10:35 am (EST)
Added 10:35 am (EST)

N. Gerbe - F
CBJ
Nathan Gerbe is expected to be a healthy scratch Tuesday.
Gerbe will make way for Mikko Koivu's Columbus debut. Gerbe had an assist in his only game this season with Columbus as he was also a plus-one with a minor penalty Saturday.
Added 10:23 am (EST)
Added 10:23 am (EST)

J. Korpisalo - G
CBJ
Joonas Korpisalo will get the start in goal Tuesday as Columbus hosts the Florida Panthers.
Korpisalo is 1-1-1 this season with a 2.34 GAA and a .935 save percentage. His stats look good enough to make him a starter in your fantasy pool tonight.
Added 10:20 am (EST)
Added 10:20 am (EST)

J. Puljujarvi - F
EDM
Connor McDavid has been impressed with Jesse Puljujarvi's game since the Finn returned to the NHL after a one-year absence.
“He’s definitely different,” McDavid said after Puljujarvi's first game on the top line Sunday. “He’s adapted a little more of a grind in his game, cutting to the inside and not waiting on the outside to get the puck. His forechecking has been unbelievable. He’s moving great. I really liked his game; it was probably one of the best games I’ve ever seen him play. I really liked what he was doing out there, hopefully he can grow on that...Confidence is huge, especially for him. I’ve seen him play with confidence and I’ve seen him play without it and he’s so much better when he’s got it going on. It would be nice to see him bang one in, that would help with his confidence even further, but I’ve liked what he’s done overall.” Puljujarvi is worth a pickup as he should do well with McDavid and Ryan Nugent-Hopkins on the top line.
Added 10:10 am (EST)
Added 10:10 am (EST)

C. De Leo - F
ANA
Chase De Leo will play this season for the San Diego Gulls of the AHL.
De Leo inked a one-year/two-way contract with the Ducks in the off-season after Anaheim did not qualify him. He will look to take a leadership role in his fourth season with the Gulls. “I’ve been fortunate enough to learn from some unbelievable coaches along the way and learn from some of the top players in the NHL right now; (players) that are in All-Star games that were my line mates at one point,” De Leo said. “I've always tried to let my actions on the ice lead (the way). There's a way to give constructive criticism - it's part of the game. I've been their age before, coming into a new team or turning pro. Nobody can teach you - it's things you have to go through and learn, and every day is a different lesson.” De Leo has played in four NHL games over his career and could add to that total this season, if there are plenty of injuries up front for Anaheim.
Added 9:46 am (EST)
Added 9:46 am (EST)

S. Perunovich - D
STL
Scott Perunovich is rehabbing after suffering an upper-body injury.
Perunovich will be sent to Utica of the AHL once he is healthy enough. Perunovich won the Hobey Baker Award last season as the best player in college hockey. He was drafted in the second round, 45th overall in 2018 and should eventually be a valued member of the Blues defensive corps. He had six goals and 40 points last season with the University of Minnesota-Duluth in 34 games.
Added 9:40 am (EST)
Added 9:40 am (EST)

T. Dellandrea - F
DAL
Rookie Ty Dellandrea has been impressive during his first two games with the Stars.
Dellandrea was taken 13th overall in 2018 and had 70 points in 47 games with Flint of the OHL last season. He is outstanding on faceoffs as he was named the OHL's best in their Coaches Poll in each of the last two seasons and is a great two-way player. "This kid is full of confidence. We love it," said Stars coach Rick Bowness. "He's a National Hockey League player. Listen, he's a rookie but he's going to play a lot. You saw that we aren't afraid to put him out in any situation. He's a very confident kid for a 20-year-old. He's earning the minutes and they are well deserved. I have no problem putting him out in any situation -- key faceoffs, key penalty kills, power plays, against really good lines. He can play center, right wing, he's a big part of the future of this team." We cannot recommend him this season as his value will be more on the ice rather than the stats sheet.
Added 9:14 am (EST)
Added 9:14 am (EST)

B. Saad - F
COL
Brandon Saad is not off to a good start with the Colorado Avalanche.
Saad has one goal this season in six games with a minus-eight rating but he continues to see time on the second line. You have to wonder how much longer this can continue as the Avs need some secondary scoring after their top line of Nathan MacKinnon, Mikko Rantanen and Gabriel Landeskog.
Added 9:06 am (EST)
Added 9:06 am (EST)