Brett Talley breaks down the Round 2 contests in the Western Conference. 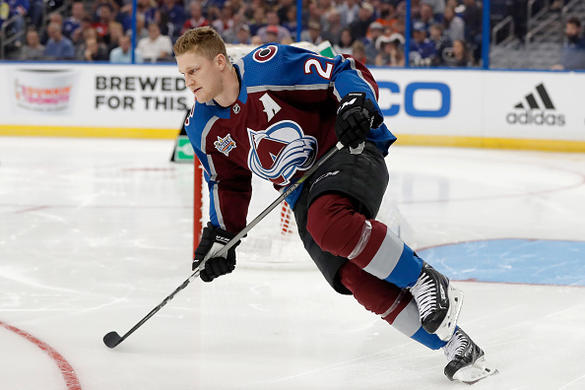 Both division winners in the Western Conference were eliminated in the first round with the conference-leading Flames falling in five to the Avalanche and the Central Division-winning Predators going down in six against the Stars. In the two-three seed intra-division matchups, St. Louis took down the Jets in six, and the Sharks outlasted the Golden Knights in a crazy seven-game series. St. Louis will have home-ice against the Stars, and the Sharks will have that advantage against the Avs. Stars-Blues kicks off Thursday while Sharks-Avs gets going on Friday. Below are breakdowns of each series.

St. Louis is a -155 favorite to win the series, and it’s hard to disagree with the oddsmakers. If you’ve watched a single St. Louis game in the playoffs, you’ve likely heard it mentioned that they were last in the conference on January 2 but turned their season around and finished with 99 points as the three- seed in the Central Division.

While the narrative feels a bit played out, there’s no denying that the Blues have been superb down the stretch. St. Louis’ first game after the All-Star break was on February 2, and from that day until the end of the regular season they were spectacular. At 5v5 (score and venue adjusted) they were sixth in the league in CF% (Corsi For percentage) and second in the league (and first in the West) in percentage of the high danger scoring chances generated in their games (HDCF%). Said another way, they generated the fourth most high danger chances and allowed the seventh fewest.

All that said, the Blues did not dominate the Jets, who ranked bottom 20 in the league in both CF% and HDCF% in the last two-plus months of the season. The even strength shot attempts generated were virtually identical over the six-game series as were the goal totals with both teams scoring 16 goals. The Jets actually won the high danger chances battle as they generated 16 more of those at even strength. The difference ended up being, to some degree, goaltending. Jordan Binnington finished the series with a .922 SV% compared to a .913 SV% for Connor Hellebuyck.

If you’re a Stars fan looking for some hope (and I am), you can start with the fact that St. Louis is unlikely to get the better goaltending in this series. Binnington was a big part of why St. Louis was able to turn their season around, and his 13.74 Goals Saved Above Average mark was good for 12th among 67 qualified goalies. But Dallas goalie Ben Bishop led the league in GSAA, and he was tremendous in the first round as he finished it with a .945 SV%.

When the series is in St. Louis, you can expect the top lines to be matched up as Ryan O’Reilly’s line saw Winnipeg’s top line almost exclusively at even strength in the first round. Oskar Sundqvist’s line saw Winnipeg’s second line in the first two games in St. Louis but saw a lot of Winnipeg’s top line in Game 6 when that line played a ton of minutes. The Sundqvist line was St. Louis’ best in the possession game, so Dallas’ second and third lines could run into a tough matchup in road games. Sundqvist’s line would be a solid play in home games against Dallas’ second line which has some offensive ability but doesn’t dominate possession. Of the top lines, Dallas’ top line has the advantage in that matchup. Dallas’ top trio combined for 16 points in Round 1 while the pair of O’Reilly and Vladimir Tarasenko has just two points.

When the series shifts to Dallas the matchups likely change. Dallas like to use the Radek Faksa line against opposing top lines, and they’re capable of winning that matchup. In Game 6 against Nashville, Faksa’s line played pretty much straight up against Nashville’s top line and generated 23 shot attempts at even strength while allowing only 10. That said, Faksa’s line is still likely a matchup in which the O’Reilly line will have more offensive upside than they will against Seguin’s line. The second lines should again matchup in Dallas, so the Roope Hintz-Jason Dickinson-Mats Zuccarello line could be a bit quiet at even strength in the series. Seguin’s line will get plenty of ice time against St. Louis’ bottom six at home, so they have even more upside at home than they do on the road.

The Sharks open this series as a -145 favorite, and you can see why Vegas prefers them. San Jose finished the regular season with 101 points, second in the West only to Calgary. They’re also an outstanding possession team as they were first in the league in regular season in CF%. They have an elite back-end with Brent Burns and Erik Karlsson leading the way, and they have two legitimate top six scoring lines.

The problem for San Jose is that their goaltending is straight up garbage. They had the worst team save percentage in the regular season at .889, and Martin Jones finished 66th of 67 qualified goalies in GSAA. Jones had one monster game against Vegas in which he stopped 58 of 59 shots faced. Despite that incredible performance, Jones’ only had a .904 SV% for the series. That’s going to be a massive problem for San Jose going forward.

Also problematic for San Jose is the fact that they got outplayed by Vegas in the first round. The Golden Knights generated more shot attempts and more high danger scoring chances at even strength, and they scored two more goals than San Jose did over the course of the series. If not for an extremely questionable five-minute major penalty late in Game 7 during which San Jose scored four power play goals to an erase an 0-3 deficit, the Sharks would be (and should be) sitting at home.

On the flip side, Colorado was the better team in their first series as they easily outshot and out-chanced the Flames at even strength. On top of that, goalie Philipp Grubauer was excellent with a .939 SV% over five games. Grubauer’s season somewhat mirrors that of St. Louis as he struggled mightily through the first half. However, he really turned it around after the break with a .948 SV% in 16 games played in February, March and April.

When the series is in San Jose, you can expect Logan Couture’s line to matchup with Nathan MacKinnon’s line. When they’re in Colorado, MacKinnon’s line should see more of the Tomas Hertl line as the Avs chose to use MacKinnon’s trio more against Calgary’s second line in the opening round. Both of San Jose’s top lines are excellent in the possession game, so the MacKinnon unit doesn’t really have a bigger matchup advantage at home or on the road. They have more upside at home where the Avs can get them out against San Jose depth players if they’re desperate to generate offense. As for the Sharks, the line less likely to see MacKinnon depending on where the game is being played would have more upside.

San Jose has more depth in the bottom six, so if you’re looking for someone less obvious who could score, that’s a spot to consider. Colin Wilson is a less obvious name to consider from Colorado. He plays on the top unit with Colorado’s studs, and he played some with Mikko Rantanen at even strength in Game 3 when they didn’t have their big three together.

The pick: Colorado in 6

NHL Brett Pesce won't be ready for qualifying round

NHL Sven Baertschi opts out of the playoffs

NHL Hagelin to leave the bubble in September

NHL Travis Hamonic opts out of NHL Return to Play

B. Pesce - D
CAR
Brett Pesce (shoulder surgery) is projected to be able to start skating with contact in late August.
In other words, he won't be an option for the start of the qualifying round. It remains to be seen if he'll be part of the playoffs at all. He underwent shoulder surgery on March 5 and the initial timetable was four-to-six months. Pesce had four goals and 18 points in 61 games while averaging 21:53 minutes during the regular season.
Added 3:56 pm (EST)
Added 3:56 pm (EST)

R. Polak - D
DAL
Roman Polak's contract with HC Vitkovice of the Czech Extraliga is a three-year deal.
Polak is still under contract with the Stars until the 2019-20 campaign comes to an end, but he will reportedly opt-out of the 2020 playoffs. In other words, he might have played in his last NHL game. “If he wants to stay home, it’s his decision,” Stars GM Jim Nill said. “But that’s all I know about this right now. There isn’t anything more.” Polak, 34, has 26 goals and 140 points in 806 career NHL games.
Added 12:51 pm (EST)
Added 12:51 pm (EST)

A. Miele - F
ARI
Andy Miele is reportedly on unconditional waivers.
Arizona will be able to mutually terminate Miele's contract if he clears. Miele has an offer from an overseas team, so that's presumably why this is happening. He scored 15 goals and 48 points in 58 AHL games this season.
Added 12:48 pm (EST)
Added 12:48 pm (EST)

G. Pateryn - D
MIN
Greg Pateryn is out of action indefinitely with an upper-body injury.
Pateryn missed a large portion of the 2019-20 season with a core muscle injury but did return in January. He played 20 games this season for the Wild, garnering three assists. He has no fantasy value.
Added 10:58 am (EST)
Added 10:58 am (EST)

S. Baertschi - F
VAN
Sven Baertschi has become the second player to opt out of the playoffs.
Baertschi played only six games for Vancouver before being placed on waivers in December and spent the rest of the season in the minors. His spot on the roster will be taken by Kole Lind.
Added 10:53 am (EST)
Added 10:53 am (EST)

M. Koskinen - G
EDM
Mikko Koskinen joined the Edmonton Oilers in practice for the first time in Phase 2 Friday.
The netminder returned to Europe during the pause. He was 18-13-3 with a .917 save percentage and a 2.75 GAA. He will battle Mike Smith for the starting gig in net for Edmonton when the Oilers play Chicago in the play-in series starting August 1.
Added 10:45 am (EST)
Added 10:45 am (EST)

S. Stamkos - C
TB
Steven Stamkos suffered a lower-body injury and will not be at full strength during Phase 3.
Stamkos is expected to be ready for the round-robin games. He suffered the injury recently while practicing. He needed core muscle surgery on March 2 and was back in fine form before the current injury. Stamkos had 29 goals and 66 points in 57 games before the injury . He should be a first round pick in most playoff pools this season.
Added 10:25 am (EST)
Added 10:25 am (EST)

J. Oligny - D
VGK
The Manitoba Moose have signed defenseman Jimmy Oligny to a one-year deal.
Oligny was acquired from the Vegas Golden Knights 18 months ago and has yet to play a game in the NHL. The 27-year-old had four goals and 16 points in 53 games last season with Manitoba. He has no fantasy value.
Added 9:34 am (EST)
Added 9:34 am (EST)