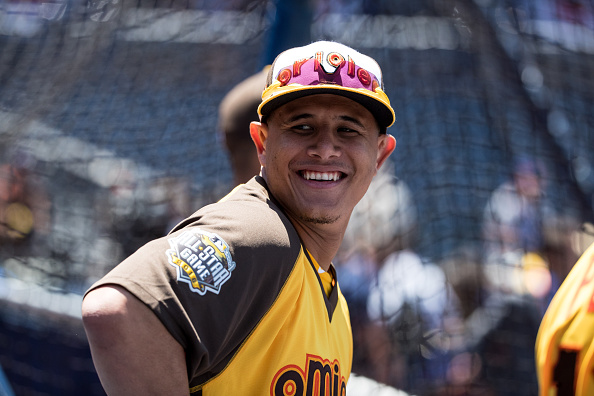 After an offseason filled with conjecture and speculation, Manny Machado finally found his deal signing for a reported record contract with the San Diego Padres. For fantasy owners, it’s now time to try and discern his value. Petco Park can be wonky in terms of park factors but Machado could maintain his power by pulling the ball.

When trying to set projections, Machado’s been a bit of an enigma, but not in terms of games played. He’s appeared in at least 156 games in five of the last six seasons. He’s recorded at least 30 home runs in four straight years. But, his stolen base totals range between zero and 20 in this time span. Machado’s hit as high as .297 and as low as .278 as well.

It’s difficult to predict how Machado will adapt to San Diego, but if he adapts well, it will keep him among the top fantasy producers. Over the last three years, Machado’s played in 478 games with 1,915 at-bats, 274 runs, 109 home runs, 302 RBI, 23 stolen bases and a .283/.340/.515 line. He walks eight percent of the time with a 16.3 strikeout percentage. Machado’s .232 isolated power aligns with last year’s and his 40.5 pull percentage along with a 37.8 hard hit percentage will be necessary to rack up fifth straight 30-plus home run season.

Using Statcast, here’s all of Machado’s line drives and fly balls from the last three years with his new home as the overlay: 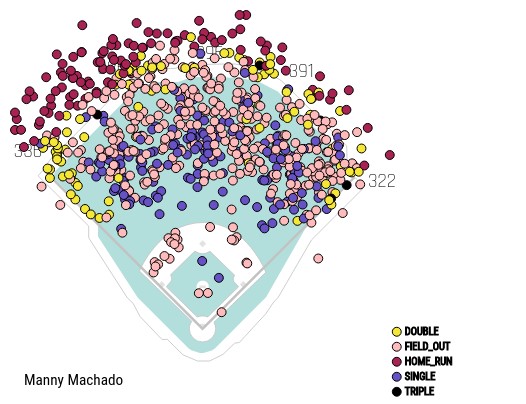 Staying with Statcast, Machado accumulated 533 batted ball event and ranked sixth in the majors with 60 barrels last season. He also recorded 257 events with an exit velocity of 95 MPH or higher for a 48.2 hard hit rate. Hope lies in his 95.1 MPH average exit velocity on all of his line drives and fly balls to overcome his transition to San Diego.

Shifting to Fangraphs, digesting the results of his batted ball data to left and center field also yields interesting results:

When perusing the chart above, Machado can hit 30 or more home runs, even his new environment due to his pull side power. With a 14.4 average launch angle last year, a bit more lift or a spike in pull percentage will carry his power numbers. He can handle elevated pitches in the strike zone, especially in the center and upper right. Machado struggles with high and inside pitches but displays power in other zones. His zone profiles from last year illustrate this:

However, in fantasy, it’s how he will perform across all the categories which will determine when to target him. Here’s Machado’s projections from three different systems:

Machado’s last three year slash and power reflects well in the projection above. Predicting his stolen base total can be akin to playing the lottery. San Diego did rank eighth in stolen base by game attempts last year, so Machado could record double digits as forecast by ATC. For those bullish on Machado, the ATC line would be ideal.

It will also depend on where he lands in the lineup. Padres second hitters last year recorded 659 at-bats with 78 runs, 71 RBI and 15 stolen bases. Their third batters accrued 652 at-bats with 78 runs, 80 RBI and 11 steals. This tempers the numbers above, but there’s hope the offense improves with a healthy outfield and the addition of Machado. Also, Machado’s expected average from xSTATS of .294 the last three years should defray a collapse due to ballpark factors.

Moving to San Diego seems less than ideal for Manny Machado in fantasy, but it’s not a deterrent when targeting his dual eligibility at shortstop and third base along with the projections above. If his average draft position drifts due to his new home, it could create a unique buying opportunity for Machado. Adding a player in his prime makes perfect sense, just be sure the price is right.