**FREE PREVIEW** Greg Jewett dives deep into the stats to tell fantasy baseball owners what they should expect from Cubs infielder Javier Baez during the 2019 MLB season. 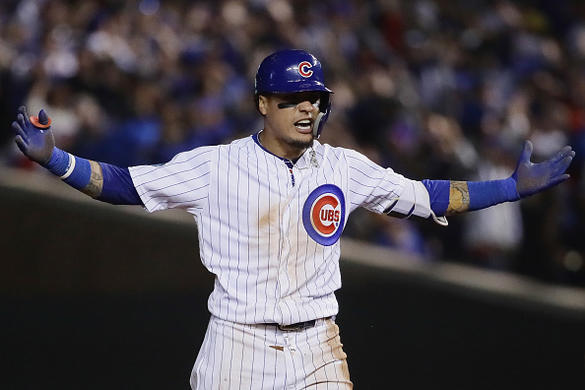 Last year marked a precipitous rise for Javier Báez from the 58th hitter taken in NFBC drafts to second in the National League most valuable player voting. Baez exceeded all expectations playing in 160 games with 101 runs, 34 home runs, 111 RBI, 21 stolen bases and a .290/.326/.554 slash line. His isolated power rose by 57 points, line drive percentage increased by 6.7 percent along with upticks in home runs per fly ball and hard hit rates.

This breakout will put Baez in the midst of uncomfortable debates this draft season. Will he be worth the reach at his present price point? Can Baez repeat his counting statistics entering his peak power years? What will he slash in 2019? For starters, his present average draft position as the 12th player overall and 11th hitter changes his valuation. With this in mind, here’s a poll run on Twitter with fantasy owners erring to the side of caution with Baez:

Javier Báez presently has an ADP of 12.82 with a range of 6th overall as his highest & 22nd as his lowest pick through 44 drafts. You would....@FantasyAlarm

Just under 400 voters confirmed my bias suggesting Baez may not worth the first-round price tag. However, recency bias can work against fantasy owners as well. If trying to build a team balanced in power and speed, Baez makes sense. Especially when factoring the versatility he provides an owner, being eligible at shortstop, second base and third base. In league which use middle and corner infield spots, Baez can be utilized in five different positions. He’s also one of seven hitters to record at least 30 home runs and 20 stolen bases last season.

Concerns will arise when trying to marry his plate discipline to a repeat of his breakout season. Due to his prodigious numbers in the minors, Baez supporters awaited last year as a coronation of his talents. But, will 2018 prove to be an aberration or one of growth as a player?

Starting with his plate discipline, Baez slightly improved upon his 18.6 swinging strike percentage from 2017 to last season’s 18.2 percent, but it ranked as the second worst rate in baseball among all qualified hitters. Baez also finished with the second worst O-Swing (swings at pitches outside the strike zone) and tied for the fourth lowest contact percentage (68.5 percent) with Khris Davis . For perspective, Davis has hit .247 in each of the last three seasons. As for Baez, his discipline metrics according to Fangraphs can be seen here:

Condemning Baez would be a mistake, but it’s also worth noting Baez owns the fourth highest swinging strike percentage (17.6) over the last 10 seasons among all qualified hitters. Joey Gallo leads the way with a 19.3 rate and his contact sits eight percentage points below Baez. Using Brooks Baseball as a reference, Baez did make strides in reducing his whiff per swings rate against pitch types last year. Here’s a chart of his totals against each pitch with his whiffs per swing percentage, batting average against and isolated power the past two years:

Baez made gains against curves and cutters in terms of power, but not necessarily in average. He hit well for average against sinker ball pitchers, but his ground ball lean caps his power against the pitch. Some answers, but more questions within his profile. Especially when viewing his swinging strike heat map: 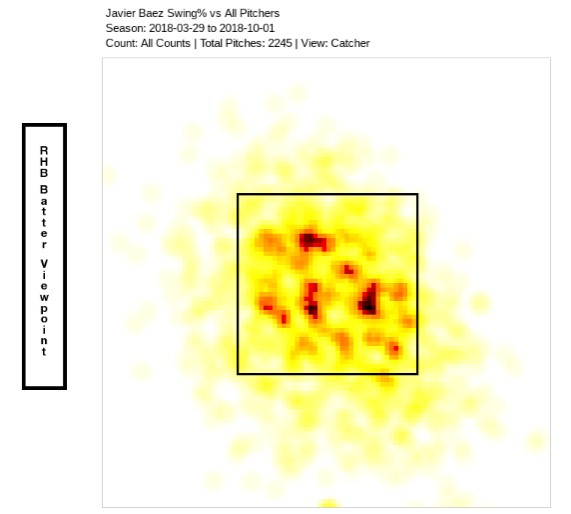 Or, Statcast’s strikeout view by pitch: 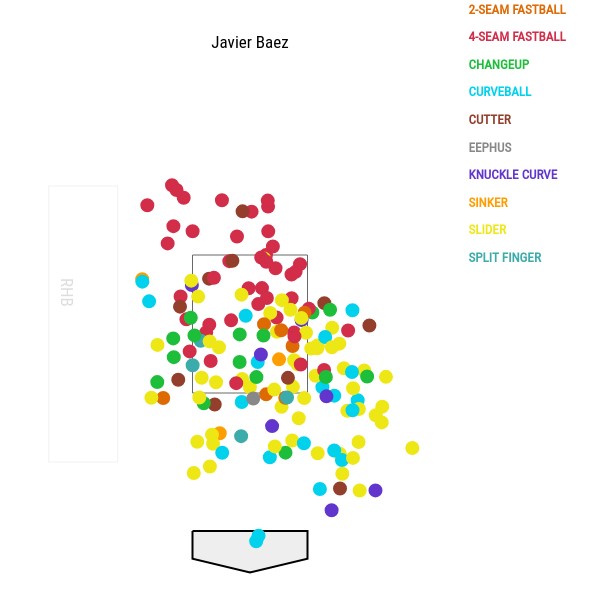 Part of his approach, to make up for the high swing and miss rate, leads Baez to be more aggressive. He swung at the first pitch 37 percent of the time last season. In 2017, Baez attacked in 48.2 percent of his at-bats. But it works for him. Here’s his results the last two years when putting the first pitch into play:

Whether the league adjusts to this remains to be seen, but two years of data suggests if it works for Baez, stick with it.

In regards to power, Baez did make strides, especially with Statcast data. He finished in the top-7 percent with a 12.6 barrels per plate appearance percentage and 10th overall with 56 barrels. Baez also averaged an exit velocity of 96.9 MPH on fly balls and line drives. However, his 9.2 average launch angle makes it difficult to forecast further growth in power, even with the propensity to barrel baseballs. He made a push to move into the top-five seasons in regards to home runs to walks but fell far short of Dante Bichette’s record 1.82 ratio (40 home runs to 22 walks) in 1995 with a 1.17 rate (34 home runs to 29 walks).

But, his last three-year average of .280 sits above his expected average (.274) using xSTATS in this time frame, but could give a clearer image of how his 2019 could translate. Investing in an average within the .270-to-.280 range seems just above Steamer, and more palpable. Since his power can be tied to accumulating at-bats, reaching 557 at-bats with last year’s rate (17.82) would translate to 31 home runs, above the Steamer number. This seems more realistic, especially with Baez entering his peak years for power.

As for his counting statistics, it will depend on where he hits. Baez rose in the order and presently slated to hit fourth, but he hit second 38 games, third 22 games and fourth 31 games last year. Match-ups and performance always come into play for a Joe Maddon lineup. As long as he accrues most of his at-bats within the top four spots in the batting order, Baez should exceed the Steamer projection, 93-to-100+ runs and 90-100+ RBI could be on tap.

It’s apparent Javier Báez will not be for the risk averse in upcoming drafts and auctions. He will be a lightning rod for discipline versus production in the new era of baseball. He’s a bit too aggressive, swings and misses too often but produces when he makes contact. Representing a new breed of hitter, Baez can barrel a baseball, swing and miss or ground out. A much different three-true outcome type of hitter, but it’s applicable. Last, the steals. This opens a different concern. Baez attempted 30 stolen bases last year and finished in the top-five in terms of caught stealing, nine times total. With the 66th ranked sprint speed in baseball (28.9 feet per second), Baez may not run as much in 2019, he only attempted three when batting cleanup.

Personally, adjusting for Baez will be necessary, but my stomach agrees with the poll results. Would not be against getting Baez in the mid-to-late second round, especially with the positional versatility, but will not reach for him in drafts due to the pending migration of his average to the mean. Owners would also be wise to adjust for fewer steals. All in all, Javier Báez proves to be an exciting player to watch and a tremendous player to own last year (kudos to Rick Wolf), but with a higher price tag, heed some of the warning signs before paying full retail.

J. Lucroy - C
BOS
Jonathan Lucroy has taken some grounders at first base during Summer Camp.
Lucroy has made 35 starts at first base during his career and gives the Red Sox a right-handed hitting option to pair with Mitch Moreland at first base. The Red Sox are expected to also carry Christian Vazquez and Kevin Plawecki as catchers, so some additional versatility with Lucroy would be a bonus. Unfortunately, he hasn't had much fantasy appeal since 2016.
Added 8:51 am (EST)
Added 8:51 am (EST)