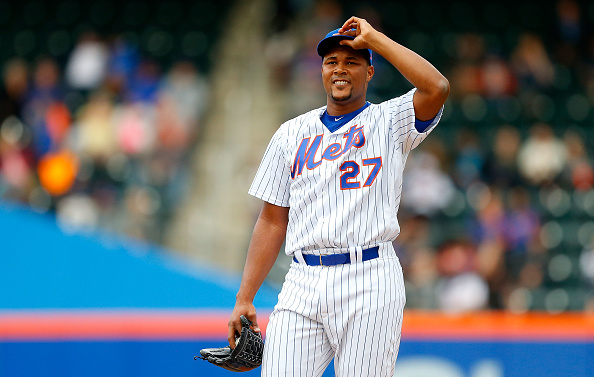 With spring training games starting, it’s not only time to see baseball in sunshine, but to hypothesize about the future roles of many players. Due to so many bullpen roles in flux, along with teams carrying extra arms to make it through the season, honing in how they’re expected to be used a month ahead of time can be pivotal when searching for saves. While this can be an imperfect science, many teams will use their prospective closer in the fifth inning prior to the starters leaving the game.

Keeping this in mind, here’s five teams with closer questions and how to discern who to watch closely in order to target the right arm to own in upcoming drafts. Due to the volatility of the position, this column will be updated weekly to help owners identify potential closer changes based on role or performance leading up to fantasy drafts. 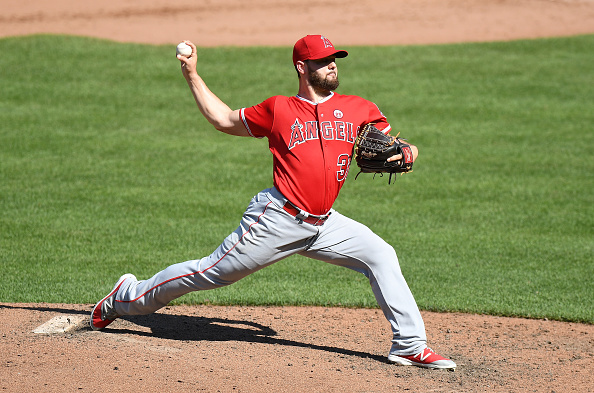 Covering closers through the years, there’s no more frustrating manager to try and predict than Mike Scioscia. Eight different pitchers recorded a save for the Angels last year and two of the top four in total saves for the team will not be back in the fold. Of course, even though Bud Norris  and Yusmeiro Petit left via free agency, the team added veteran Jim Johnson to muddy the already confusing waters.

At the end of the season, Blake Parker  emerged as the most reliable closer for Scioscia but enters camp in competition for the job despite only 10 pitchers owning a better strikeout minus walk percentage than his 27.6 percent last year. Parker finished with a 2.54 ERA fully supported by a 2.48 bbFIP from xSTATS. After missing most of 2015, Parker’s carved out a niche in the Angels bullpen and could be primed for a nice season if Scioscia uses him as the ninth inning option. Especially if he can carry over his over 40 percent whiff per swing rates with both his curve and split-fingered fastball.

Lurking in the background, Cam Bedrosian , who opened the season as the closer in 2017 but lost the job after incurring another injury. Owning upside, Bedrosian’s never been able to put together a full season with the Angels with only 44.2 innings as a career high watermark. Bedrosian’s statistics from last year pale in comparison to Parker above, so he’d need a very strong spring to enter the conversation as the closer, but it’s a very long season.

Last, and least, Jim Johnson could transition to the multi-inning arm like Petit provided last year with situational saves. But, his decrease in ground ball percentage last year yielded a higher swinging strike percentage with mixed results. Especially in regards to his ratio damages with a 5.56 ERA, 4.42 bbFIP and 1.48 WHIP. It’s best to leave Johnson on waivers and let someone else speculate on the name recognition.

Another year, another potential mess in the Texas bullpen. Akin to the Angels bullpen above, seven different Rangers pitchers recorded at least one save last year. However, the bullpen only closed out 29 games with 21 blown saves as a group leading to the team losing 23 games which they led or were tied after six innings. Plus, the team’s entering camp with a myriad of options at starting pitcher with the potential for a six-man rotation due to Matt Bush  and Mike Minor  vying for spots in the rotation.

This puts Alex Claudio  in a precarious situation. He ended up leading the team with 11 saves last season but his ability to work multiple innings in an appearance could make him too valuable to close in 2018. Of his 70 appearances last year, Claudio worked multiple innings in 21 of them (30 percent) along with making a spot start for the team. His ability to generate ground balls (career 66.3 percent rate) and keeping his pitch counts low make Claudio almost indispensable for the Rangers bullpen.

For those in the skills over role school of thought, do not forget about Keone Kela . He’s one of six relievers over the last 10 years to yield a .140 batting average against or lower in at least 30 innings of work during the 2017 season. Kela also struck out 51 in only 38.2 innings of work with a 2.79 ERA, 2.58 bbFIP and a .251 expected on-base average allowed. Elbow and shoulder injuries temper enthusiasm regarding his upside costing him over four months on the disabled list through the years. But, if there’s an arm in this bullpen which could take over the ninth inning and run with it, it’s Kela. Monitor his usage this spring and how the team receives him, Kela did rankle veterans last year but it’s easy to forget he’s only 24 years old.

Who Replaces Fernando Rodney  In Arizona? 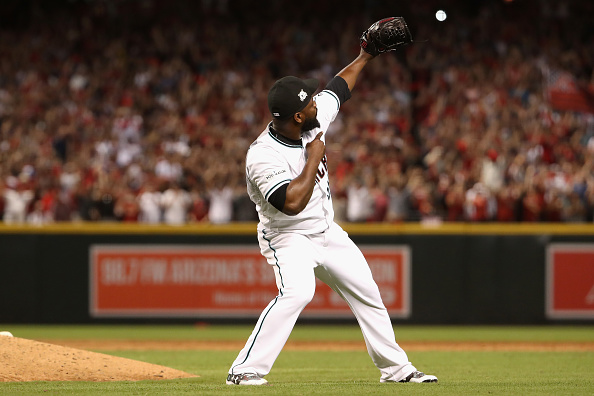 There’s two things working in whoever wins the Diamondbacks job at closer – the team’s patience with whoever wins the position and the humidor. Many hope Archie Bradley  will win the closer job during camp but do not realize his underlying statistics do not support his strong season last year along with his entering arbitration years. Ask Dellin Betances  how this works out with a team trying to suppress salary by limiting save chances.

Arizona also added Brad Boxberger  in the off-season along with signing Japanese free agent Yoshihisa Hirano . Hirano’s saved 156 games since 2010 with a 2.30 ERA over 476 appearances. Boxberger’s coming off of back-to-back season with less than 30 innings pitched in the majors but owns the arsenal to succeed in high leverage innings. His strikeout minus walk percentage of 24 last season spiked to 40.5 percent in September with 17 strikeouts against three walks in 9.1 innings of work.

It’s not definite his finish the season will carry over to his new home in Arizona, but Boxberger’s fastball, slider and change-up combination will play in late innings whether as a set-up pitcher or closer. Keep in mind his career WHIP of 1.25 along with a 11.7 walk percentage when trying to project his role. Not to mention injuries capping his upside. Boxberger could make for an interesting dart throw, but tracking how the Diamondbacks use him this spring will be a determining factor to his fantasy value.

As for Hirano, reports center on strong command of his fastball with a splitter and curveball, all of which he can throw for strikes. When reading between the lines of reports by the team’s beat writer along with Twitter updates, it seems like the team would like Hirano to win the job and he’ll be given every chance to do so. It’s very important to note information like this when trying to mine for saves. Archie Bradley  could do well as the closer but his swinging strike percentage of 10, and strikeout minus walk rate of 20, do not scream elite by any means. Bradley did strike out 79 in 73 innings of work with a 1.73 ERA but his 3.51 bbFIP suggests regression to the mean could be in store. All of this along with the arbitration factor makes Bradley someone to let someone else reach for him at his current draft price.

It feels like kismet when researching for an article and a team’s beat writer provides a quote to cement everything discovered. Here’s what Derrick Goold (@dgood) tweeted out Friday morning:

“Closer will ‘define in time,’ Matheny says. ‘Having a number of guys who can finish a game would be great. Somebody has to finish the last three.’ Says it could be open all season for someone to grab.”

Like the Texas situation above, this makes for skills over role to designate which pitcher to target. Many will take a chance on Luke Gregerson who’s two years removed from saving 31 games with the Astros but with only one last year after ceding the role to Ken Giles . Gregerson’s decline in swinging strike percentage and increase in home run per fly ball rate do not provide optimism for him lasting as the ninth inning option with St. Louis. His bbFIP of 4.44 also falls in line with his 4.57 ERA last year with a 1.34 WHIP. Many prefer someone with closing experience, but like Bradley above, allow someone else to speculate on Gregerson.

Instead, take a look at Dominic Leone  who joined the team as part of the return from Toronto in the Randal Grichuk  trade. Leone recorded three wins and one save with the Blue Jays last year, finally turning the corner with his live arm in the bullpen. He struck out 81 in 70.1 innings with a 2.56 ERA, 2.51 bbFIP and 58 ERA- with a 14.5 swinging strike percentage. Of more interest, Leone uses a cutter to combat left-handed hitters and finished last year with almost an identical wOBA against versus hitters from each side of the plate.

In the second half, Leone reached another level. His 39:5 K:BB ratio in 30.2 innings with a 29.1 strikeout minus walk percentage resulted in a 1.95 FIP and 0.91 WHIP. His slider generated a 60.4 whiff per swing rate and his cutter at 44.6 percent. Not saying Leone will be handed the closer job, but if he starts working the fifth inning in the spring, he’s a worthy flier.

Here’s a timeline to try and figure out how new manager, Mickey Callaway, will handle the Mets bullpen this year:

After taking all of this in, it seems like if taking a Mets pitcher for saves in a draft or auction, at least early on, it’s Jeurys Familia ’s job to lose. He’s also a part of our player profile series to be published on the site, so check back soon for more on that.

As for the rest of the pack, the rollercoaster ride of A.J. Ramos  in high leverage makes him a pass for future saves. If Familia struggles with command, look for Swarzak to work his way into a high leverage role at some point. Why? First, check out his career velocity chart:

Then, consider his rise in whiff per swing rate with his fastball from 15.84 in 2016 to 27.2 last year as a result along with his slider peaking at a 47.96 whiff per swing up from 26.56 in the previous season. Part of this could be a change in his horizontal release plus the increased velocities.

There’s plenty to digest in the five situations above and all teams will on watch in the days ahead. Whether one invests in saves or chases them, stay up to date with the bullpen report on FantasyAlarm.com.