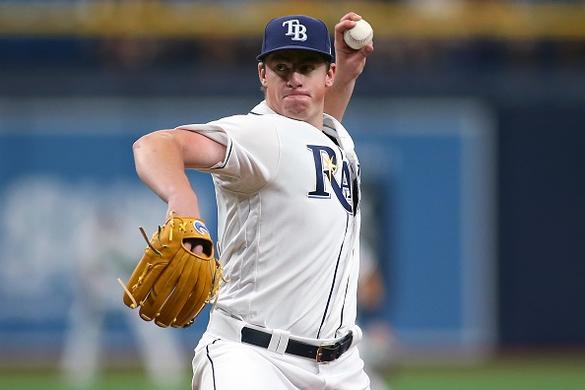 As I’m writing this, it is July 4th, so happy Independence Day to you, your friends and your family! Since you’ll be reading this on the 5th, or shortly thereafter, I hope your holiday was exceptional and filled with good times!

This week in Category Impact, we are talking wins and quality starts! It’s been quite a few weeks since we delved into this specific category, so it was time to get back into it and analyze some guys on the rubber that can give our fantasy teams a boost. Whether they are pitching for a hot offense, or pitching well themselves, each of the players below has the opportunity to benefit your fantasy team, regardless of format.

Merrill Kelly , SP ARI – If Kelly isn’t owned in your league it’s time to scoop him up. Despite not winning any of his last three starts, he’s still pitching well, and even in some of his less-than-ideal outings, he’s posting numbers that keep him fantasy relevant. He’s posted five quality starts in his last seven outings, allowing two earned runs or less four times. Could a minor alteration in his arsenal be the reason for his recent string of success? Perhaps. 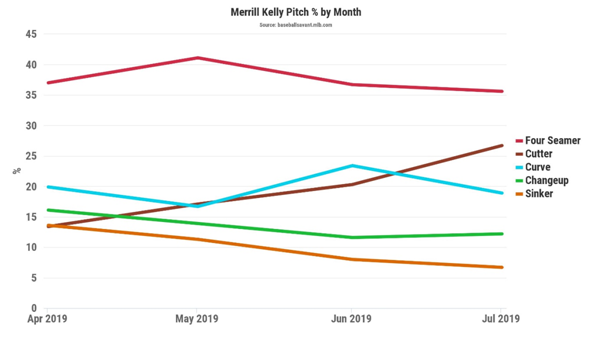 Notice the usage on that cutter? He hardly used it during the year, but the usage is continuing to increase, and he threw it more than ever before in his lone start this month. For the year, his cutter has generated a measly .244 batting average and a weak 85.4 exit velocity. Keep a watchful eye on his repertoire, because that could be the key to Kelly’s success.

Brendan McKay , SP/1B TB – McKay’s ownership has soared following a successful debut on the mound. In his professional debut against the Rangers, he struck out three batters, allowed just two base runners and carried a perfect game into the sixth inning. He will stick in the rotation and start tonight for the Rays, and there’s little to no reason he shouldn’t stick with the team. Yes, he ShoehiOhtani-esque, in that he carries both pitching and hitting eligbility, but for 2019, he will greatly benefit your team on the bump. He’s big league ready on the mound, but there’s still plenty of development and maturation needed to succeed at the plate as well. As mentioned earlier, his ownership has skyrocketed and he may already be available in your league, but if not, go ahead and add him. He’s certainly worth it, and while he’ll experience some growing pains at this level, there’s simply too much talent to not take a dive in the Tampa waters.

Steven Brault , SP PIT – The Pirates are scoring runs in bunches and hitting for a nice average. As a starting pitcher for one of the hottest offensive teams in baseball, Brault has carved out a nice niche on fantasy rosters. Over his last five starts, he’s posted a 2.42 ERA and 1.58 WHIP, and despite winning just one game, he should be doing much better. Yes, the .282 batting average allowed during that span is worrisome, but he’s served up just one home run and in the month of June, his 22.5 percent soft contact rate is the lowest of the season. Brault has actually been better the more he faces a lineup, in terms of earned run average, so even if the Pirates employ an opener with him, he will be fine to get far enough into the game to earn a victory. He’s worked at least five innings in four of his last six starts, allowed two earned runs or less in five of the past six games. He’s not the flashiest name to add, but he’s useful in fantasy formats at this juncture.

Homer Bailey , SP KC –Despite failing to notch a quality start in his last three outings, Bailey has pitched well since about the middle of June. He’s 3-0 in his past six starts, posting three quality starts in that span, not to mention coming close to notching another two quality starts. He’s added a splitter in his repertoire, and he’s throwing it much more in 2019, and with great effect. This season, opponents have generated a .206 batting average (.192 xBA) against that pitch, not to mention a 39.0 percent whiff rate. Also, every fantasy owner should love the downward trend in 2019 on the barrel rates by pitch for Bailey in 2019. 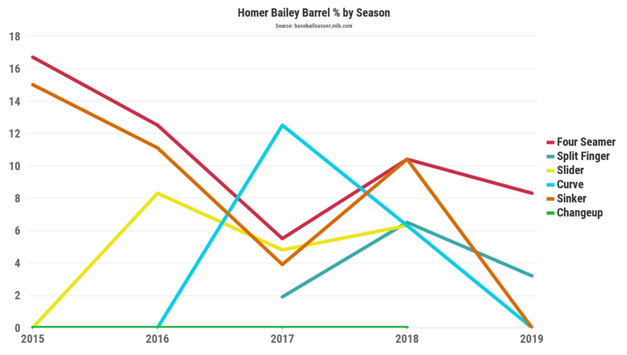 Lastly, do you know what Clayton Kershaw , Lucas Giolito , German Márquez , and Bailey all have in common? They all have a 0.5 WAR over the last 30 days, per Fangraphs. Bailey is pitching well, and while he’s had some rough stretches in his career, he’s in the midst of a good one, and can actually benefit your fantasy team.

J. Martin - CF
PIT
Jason Martin has elected free agency.
Martin cleared waivers after being designated for assignment by the Pirates, but he'll look for a gig elsewhere rather than accept an outright assignment. The outfielder was part of the package sent from the Astros to the Pirates in the Gerrit Cole trade back in January of 2018.
Added 1:13 pm (EST)
Added 1:13 pm (EST)

C. Sneed - RP
HOU
Cy Sneed has signed with the Yakult Swallows of Japan’s Central League, per Ken Rosenthal of The Athletic.
Sneed spent parts of the last two seasons with the Astros but has found a better opportunity overseas. Houston now has an additional 40-man roster spot to play with.
Added 12:01 pm (EST)
Added 12:01 pm (EST)

C. Sneed - RP
HOU
Multiple reports state that free agent right-handed pitcher Cy Sneed is being pursued by the Tokyo Yakult Swallows.
This is the same club that signed former Pittsburgh Pirate Jose Osuna recently. Sneed, 28, appeared in 18 games with the Astros in 2020, and he registered a 5.71 ERA, 1.85 WHIP and 21/10 K/BB ratio. He's been an up-and-down arm over the last couple of seasons, and a successful stint in Japan could help improve his stock going forward.
Added Yesterday 11:44 pm (EST)
Added Yesterday 11:44 pm (EST)

J. Osuna - 3B
PIT
Jon Heyman of MLB Network reports that the Jose Osuna has signed with the Tokyo Yakult Swallows.
The Pirates designated Osuna for assignment last week, and he's found a new home relatively quickly. The 27-year-old hit just .205/.244/.397 last year with four homers and a 16/4 K/BB ratio in 82 plate appearances. The year before, however, Osuna hit 10 homers with a .756 OPS in 95 games. If Osuna hits well in Japan, it certainly seems likely that he could be back in an MLB role in a year or two.
Added Yesterday 8:46 pm (EST)
Added Yesterday 8:46 pm (EST)

C. Martínez - SP
STL
Hector Gomez of Z101 Sports reports that prosecutor Osvaldo Bonilla will request a warrant against Cardinals pitcher Carlos Martinez.
The warrant comes after Martinez participated in a street party the previous weekend in the Dominican Republic. He will be charged with violating all the social distancing protocols and the mandatory use of masks at the gathering. A statement on Monday from the Cardinals acknowledged that they were "gathering details  about his participation after a video surfaced that showed him riding a motorbike with a passenger through a crowd on on a seaside street. More information on the potential arrest should present itself in the coming days, but it's possible Martinez will face disciplinary action on top of any punishment he receives for the violation. Derrick Goold of the St. Louis Post Dispatch tweets that the hurler is expected to pay fines, according to a representative.
Added Yesterday 8:23 pm (EST)
Added Yesterday 8:23 pm (EST)

Y. Molina - C
STL1
In an interview with Mas Que Pelota, free agent catcher Yadier Molina mentioned that the Yankees, Mets, Padres and Angels have shown interest this offseason.
Molina, 38, also notes that he would like to return to St. Louis, and that he wants to play two more seasons. This comes a couple weeks after a report from Jon Heyman of MLB Network noting that there were 3-f4 other teams long with the Yankees, Mets and Cardinals were interested in the backstop. It still seems very likely that the potential Hall of Famer stays in St. Louis, but it doesn't appear it will be from a lack of interest.
Added Yesterday 4:12 pm (EST)
Added Yesterday 4:12 pm (EST)

R. Arozarena - LF
TB
According to the Mexican newspaper PorEsto, Randy Arozarena has been released after a 48-hour hold and will not face charges for a domestic incident involving his daughter and his daughter's mother.
Arozarena was detained in Mexico's Yucatan state on Tuesday on allegations of domestic violence and a disagreement over custody of the young child. His lawyer, Carlos Chable, told PorEsto that "there were not enough elements to bring it to trial" (translated from Spanish) and that "there is no longer a crime to prosecute" (also translated). Arozarena could still be subject to some sort of discipline from Major League Baseball once the commissioner's office completes its own investigation into the incident, which was partially caught on video.
Added Yesterday 12:34 pm (EST)
Added Yesterday 12:34 pm (EST)

W. Franco - SS
TB1
Rays SS prospect Wander Franco is headed back to the United States for further evaluation of an arm injury.
Franco came down with discomfort in his right biceps earlier this week while playing for Leones del Escogido of the Dominican Winter League, and there's at least some level of concern that it might be serious. The 19-year-old shortstop, widely considered the top overall prospect in baseball, had batted .350/.435/.500 with one home run and one stolen base through five games (23 plate appearances) this winter in the DOWL.
Added Yesterday 10:31 am (EST)
Added Yesterday 10:31 am (EST)