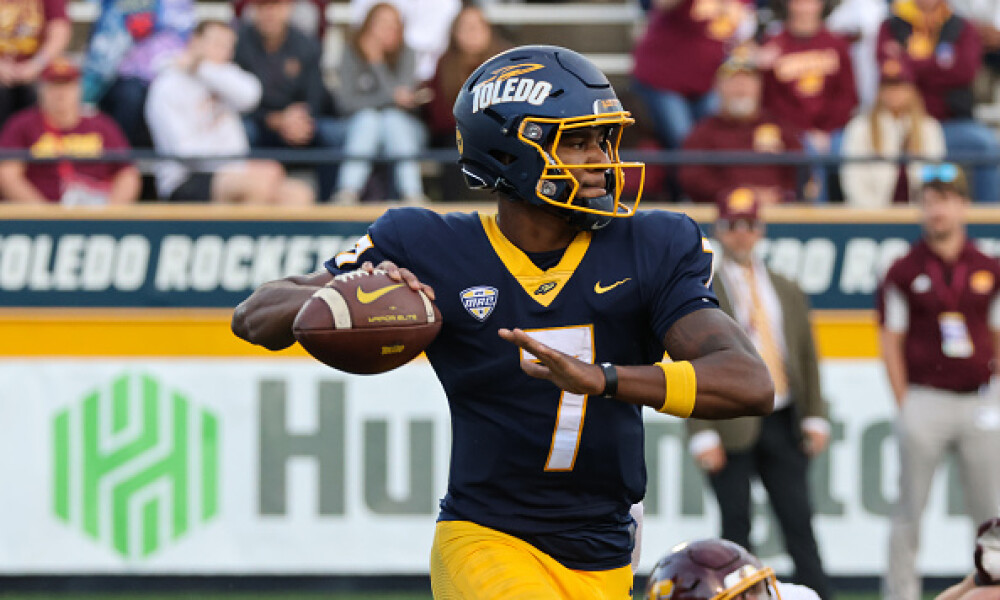 Good afternoon, FA Nation and we are back for more college football tonight! Week 12 of CFB DFS action continues with a two-game MACtion Wednesday slate on DraftKings and FanDuel. The first game kicks off at 7pm ET ads Ohio comes in as a road favorite against Ball State and then we have the big MAC rivalry game- the Battle of I-75 between Bowling Green and Toledo. Check out the college football betting odds, team totals, and over/under's below to get an idea of which games or teams to target in CFB DFS lineups. MAC football games are historically high scoring and full of action, so it should be another exciting evening of MACtion football! If you're building CFB DFS lineups tonight, be sure to check out our college football weekly projections and the CFB DFS lineup generator. So now we are ready to dive in and check out my top CFB DFS top picks and plays for Tuesday night, November 15th!

The Battle of I-75, one of the top rivalries in the MAC, returns and we get another chance to see of the most dynamic players in the league — DeQuan Finn. Finn can dominate on the ground with his legs or in the air with his rocket arm but either way, he gets it done. After missing the Eastern Michigan game, Finn returned in last week’s win over Ball State throwing for 301 yards and three touchdowns. He has now passed for 1,938 yards and 21 touchdowns and added 530 yards and eight scores on the ground over the entire season. Bowling Green’s secondary ranks eighth in the MAC in pass efficiency defense and is allowing 256.7 yards in the air per game putting Finn in play in all formats tonight.

Ball State will be leaning on Steele tonight — the best runner in the MAC. They will need to control the clock if they are to stop Kurtis Rourke and company and no one better to do that than Steele, who has 1,280 rushing yards and 13 total touchdowns on the season. He has it all — speed, size and field vision and has gone over 100 yards in eight of 10 games this year. He has really turned it on over the last two games with 190+ yards in both. Carson Steele is by far the best running back on the slate.

Jackson is one of the best receivers in the MAC and now has 66 catches for 755 yards plus he has hauled in three touchdowns. Last week, he extended his streak of catching at least one pass in 35 consecutive games which is tied for fifth-most among all active FBS players. Tonight, he gets to face a Ohio pass defense that allows a slate-worst 316 passing yards per game and 8.4 YPA. Jackson is your top pay up at wide receiver tonight on both DraftKings and FanDuel.

Newton is a near DraftKings misprice and at only $4.9K on DraftKings, he is the top point-per-dollar play of the slate. Newton is the Toledo playmaker/deep threat and has become Finn’s primary target. Just check out his 17.5 yards per catch average and you know that they are connecting far downfield often. Newton, the team’s touchdown leader, is coming off a game-high 94 yards on seven receptions last week against Ball State and did set up the go-ahead TD pass to Jamal Turner with a minute to go. Lock Newton in your cash lineups.

Hunt, a tight end, is second on the Cardinals with four touchdowns and is coming off a four catch and 56-yard game against Toledo. Good things seem to happen when the Cardinals get their tight ends involved and in the week before that against Kent State, Tanner Koziol and Hunt combined for 11 catches, 129 receiving yards and a touchdown, including the game winner. The previous three weeks, the two combined for 15 catches, 129 yards and two touchdowns. Both ends are solid values but if you need the savings Hunt is the direction to go on DraftKings.

Others Players to Consider: