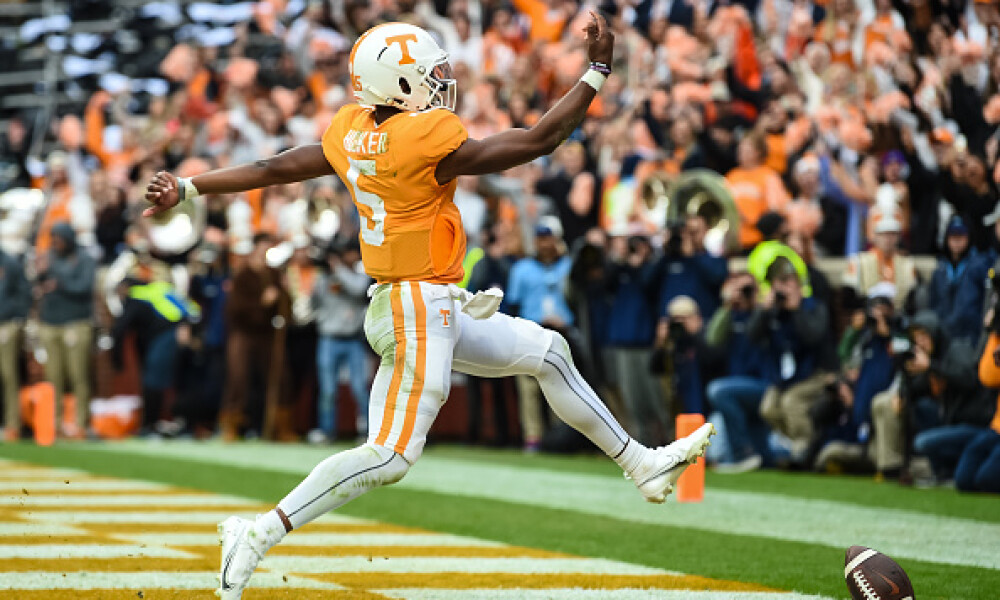 College Football Week 12 continues with a Saturday Night (7:00 pm ET) slate of games for our CFB DFS lineups! If you're looking to build CFB daily fantasy lineups on DraftKings or FanDuel, we have you covered as DraftKings brings us an eight-game slate and FanDuel will present us with six games with both slates locking at 7:00pm ET lock. Check out all the CFB DFS top picks, lineup strategy, teams to target, and value plays to lock in before the action begins. Remember, you can access all our College Football DFS coverage with a Fantasy Alarm All-Pro Subscription. If you have any questions about CFB daily fantasy lineup strategy for Week 9 or beyond, ask away in the Fantasy Alarm Discord chat. Plus, check out our college football daily projections and CFB DFS lineup generator for more winning picks. Now, let's get into the CFB DFS top plays and lineup picks for College Football Week 12 Saturday Night:

Hooker, the engine of Tennessee’s dynamic offense, is the top-rated quarterback in the SEC and second in the nation with a 90.2 quarterback rating (QBR). He is third in the country with a 71.1% completion percentage and after a bad game against an elite Georgia defense, he rebounded with 355 passing yards and three touchdowns plus 50 yards rushing and another score in their 66-24 blowout over Missouri. Hooker is the top-overall quarterback on the slate.

Penix Jr. and Washington have one of the best aerial offenses in the nation and should easily crush the leaky and bad Colorado defense. He was just named the Pac-12 Offensive Player of the Week for the second time this season after throwing for 408 yards and two touchdowns in the team's 37-34 upset win over sixth-ranked Oregon. This is going to be a stat-padding game for Penix Jr. before he probably gets pulled at the end of the third quarter, but he should get there with his fantasy points long before that.

Dart has completed 61 percent of his passes for 2,123 yards and has thrown 15 touchdowns to seven interceptions. He leads the SEC and is 10th in the FBS in passing yards per completion. Tonight, Dart faces an Arkansas defense that is allowing 280.5 yards per game in the air and 8.5 yards per attempt (YPA) and is the top value at the position.

Charbonnet is third in the country in yards per rush (6.23) and he’s averaging 3.1 yards before he even gets touched. He also leads the Pac-12 by a wide margin with 1,145 rushing yards this season and is tied for second in the conference with 13 rushing touchdowns. The guy is a flat-out stud and over his last four games, he's touching the ball an average of 21.8 times for 182 yards and 40.9 DraftKings fantasy points per game. He is the most expensive runner on the slate but is the best overall play in all formats by a wide margin.

Gray, one of the most dynamic running backs in the country, has touched the ball 60 times in the last two weeks. His 1,113 rushing yards rank 14th nationally, and he is sixth in the country averaging 6.75 yards per carry. Gray is coming off a monster game in last week’s 23-20 loss to West Virginia when he ran for 211 yards and two touchdowns on 25 carries. He has gone over 100 yards rushing seven different times this season while also contributing another 189 yards through the passing game this season.

Sophomore Cameron Davis is the first back off the bench for Washington and is the Huskies' touchdown maker with 11 scores on just 89 carries. He splits time with Wayne Taulapapa but is still getting 10+ touches a game over his last four with a 41.5 yard and 15.1 DraftKings fantasy point average in that span with four scores. Colorado has one of the worst rushing defenses in the entire nation as they allow an average of 227.8 yards per game on the ground and a 5.7 YPA with 2.9 touchdowns. Davis should make value as the top point-per-dollar running back on the slate.

Norton totaled 49 rushing yards on 17 carries (2.9 yards per carry) in last week’s loss to Oklahoma State. He also had two catches for nine yards and over his last four games is averaging 13 rushes for 40 yards per game and has two scores. Norton looks as healthy as he’s been all season and two weeks ago against West Virginia, he totaled 87 all-purpose yards and scoring two touchdowns to earn Big 12 Offensive Newcomer of the Week honors. He has taken hold of the RB1 spot and in a slate lacking much value he's in play in all formats.

Hutchinson hauled in 10 catches in Oklahoma State’s loss last week but did break Allen Lazard’s 241 reception school record. It’s Senior Night tonight for the Iowa State alpha who leads the country in receptions (97), ranks third nationally in receiving yards (1,059), and is coming off his sixth game in which he topped 100 yards and 10 receptions. Hutchinson is the top receiving threat in the Big 12 and like always, will be the focal point of Iowa State’s offense in each of the final two (or three) games of his college career.

Hyatt has probably had this date circled on his calendar for the last year as fifth-ranked Tennessee travels for an SEC clash with South Carolina. The top pass-catching option for one of the nation's most explosive offenses, Hyatt is a native of South Carolina and has been talking all week about how he never received a scholarship offer from the Gamecocks out of high school. Hyatt has been dominant all season with 58 catches for 1,116 yards and 15 touchdowns, while averaging 19.2 yards per catch. I will have Hyatt locked in my main lineup tonight.

McMillan and Odunze have become one of the best wide receiver duos in the nation. Over his last four games, McMillan is averaging eight targets and 6.5 receptions for 80 yards for a 18.7 DraftKings fantasy point average. He is coming off a huge game in the Huskies' big upset last weekend over Oregon where he caught all eight targets for 122 yards.

Odunze is 86 yards shy of 1,000 receiving yards, and he may be able to pass that mark this weekend. He also is top-10 nationally in receiving yards per game and catches per game plus has a 22.8 DraftKings fantasy point average on the season. Both Huskies receivers are in play tonight in all formats.

With Marshawn Lloyd out, Bell continues to see snaps at running back. Against Vanderbilt in Week 10, he ran the ball 16 times for 56 yards to go along with three receptions for 27 yards. Last week, he the ball another 12 times against Florida plus another couple of catches. Bell is a 6-foot-3 tight end by trade and his positional versatility has drawn the attention of NFL scouts as he has now become the leader in the Gamecocks’ backfield. There is some risk here, but Bell makes for a fine tournament value tonight.

Marvin Mims, Oklahoma ($7.2K DK/$7.5K FD) Always a GPP threat on DraftKings but cheap enough for cash on FanDuel. He has 16.3 averaged DraftKings fantasy points in his last four games.