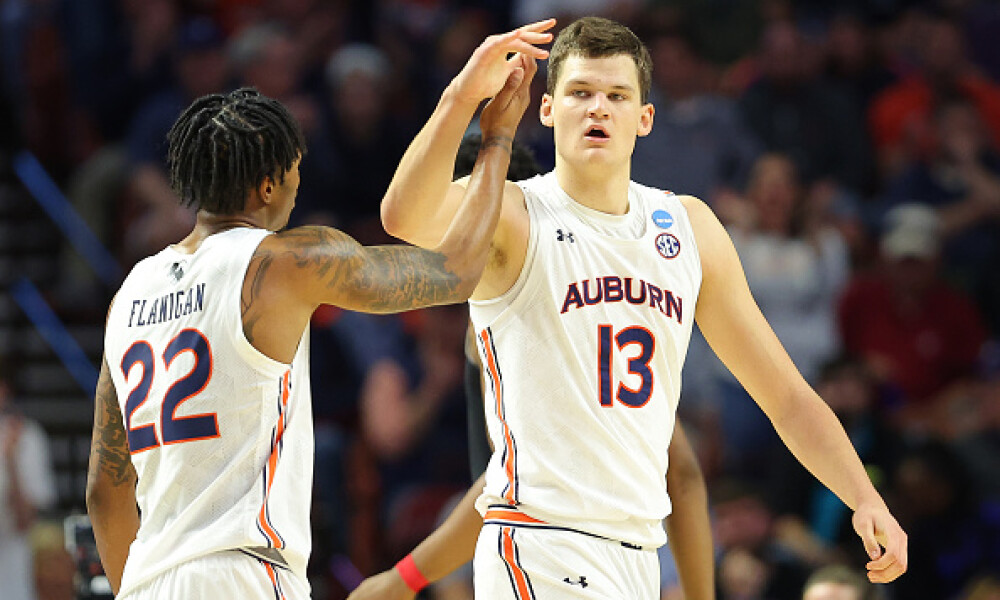 Welcome to CBB DFS for the Sunday portion of Round 2 of the NCAA Tournament! A couple of notes before we get into the playbook. DraftKings and FanDuel both have all-day slates spanning from the first 12:15 pm ET tip to the final evening game. Keep in mind that some of the game times on DraftKings or FanDuel are earlier than the game itself may start in this tournament setup. So, pay attention to when those games lock if making late lineup changes or pivots. Without further ado, let’s dive in!

Charlie Moore and McGusty rescued Miami in the opening round after leading scorer Isaiah Wong had fouled out of a one-point game with just more than two minutes left. McGusty scored five straight points before Moore's winning foul shots. Moore was brought in this year to run the transition offense necessary to compete with opponents loaded with taller players- teams like Auburn and McGusty is the go-to with a 25.8% usage and 26.8% shot rate. McGusty is a top cash play today at only $6.9K running in this up-tempo game with Auburn while Moore is an excellent pivot to use in GPPs.

It’s a known fact that Ohio State doesn’t have the biggest backcourt in the nation. Even guys who do have the proper size lack the physical development that needs to come with it. Villanova doesn’t have that problem with Gillespie and Moore, the Wildcats leading scorers averaging a combined 31.1 points per game. Moore stands at 6-4 and 210 pounds, relentlessly attacking the basket and throwing his weight around against smaller defenders and should have his way with 6’1” Jamari Wheeler covering him. Gillespie is a bit lighter than Moore but can be a physical offensive player as well and he’s most dangerous from three-point range, shooting 42.3% on the season and coming off Friday’s win over Delaware, where he made 5-of-11 from beyond the arc. With Ohio State being small and slight look for both to smash today with a lean to Moore for cash games due to price and Gillespie as a GPP pivot.

The Cyclones leading scorer and the #2 scorer in the Big 12 (17.3), Brockington cooked up again on the court finishing with 19 points and four rebounds in their upset over #6 seed LSU. He iced the game with a minute left to play knocking down two free throws and continues to be the leader and alpha of this Iowa State offense. With a 26% usage and 29.8% shot rate Brock is the 4th leading rebounder in the entire Big-12 (7.1) so don’t expect him to slow down today against Wisconsin.

Justin Kier (ARIZ) $5.3K DK/4.9K FD Solid floor and can be a main team cash if Krissa still out

Courtney Ramey (UT) $5.2K DK/5.4K FD Will get there with his mins but low floor- value is not great today

We have picked on this small Miami interior all season putting Kessler in a smash spot. The North Carolina transfer and former five-star recruit has made such a smooth transition to a new program and is likely to be named the national defensive player of the year. Kessler did, however, win the first SEC Defensive Player of the Year honors in program history. He leads college basketball in blocks per game (4.6) and block rate, sending back nearly one-fifth of opponents' shot attempts (19.3%) during defensive possessions when he's on the floor. Kessler nearly notched his third triple-double of the season Friday night against Jacksonville State, finishing with 13 points, 10 rebounds, and nine blocks, and has just as good of a chance today against Miami’s interior that is one of the worst in the nation in 2-pt percentage allowed (53.8%- 322nd).

The Duke freshman star showed why he's going to be one of the first—if not the first player off the board in this year's NBA draft.  Inside moves? The ability to finish off lobs? Easy. Perimeter shooting and the ability to create his own offense? No problem. Banchero is special and he beat CSU Fullerton with his scoring, rebounding, and playmaking Friday. He seems to be lower projected on every slate compared to the other star big men, but this kid can ball and should eat against the Michigan State defense that has struggled in the interior all season long. Banchero is the #8 ranked KenPom Player of the Year with a 27% usage/shot; 19.4% defensive rebounding and 2.7% block rate and s in play in all formats.

As Texas’ leading scorer and rebounder Allen has finally become the offensive alpha that we all were looking for in the winter. With a 24.6% usage and 22.5% shot rate Allen is coming off a big game against Virginia Tech (30 DKFP) where he stuffed the stat sheet with 14 points, six rebounds, three assists, and two steals. Today he gets a major pace-up game with Purdue and Allen will be playing every minute possible so a $7.1K price tag is one of the top point per dollar plays and giving him one of the safest floors on the slate.

Jabari Smith (AUB) $8.7K DK/8.2K FD We have been picking on Miami interior all season- why stop now- they are too small

A month ago, no one would have believed that Coleman Hawkins would be so important to Illinois’ season. In eight games from Jan. 17 to Feb. 13, the sophomore forward averaged just 1.1 points and 1.3 rebounds in 8.4 minutes. Lately, Hawkins has been as indispensable as any Illini not named Kofi- over the last six games, he is averaging 9.8 points, 5.5 rebounds, and 1.7 assists. The 6-foot-10, 215-pound post can play inside and out offensively and has been a difference-maker at the four- a position that has been a huge Illini weakness.  Over the last three games, he has played just as good as anyone on the floor- against Iowa, Hawkins played a season-high 37 minutes, scoring nine points, grabbing 11 rebounds, and blocking two shots (29 DKFP); he scored 18 points against Indiana, including a three to give Illinois the lead with five minutes left (32 DKFP) and in Friday night’s win, Hawkins was again the most active Illini and ended up with 25 DKFP.

Kyle Young (OSU) $5.0K DK/4.4K FD Nothing spectacular but on a slate lacking value can get 4X off a few rebounds