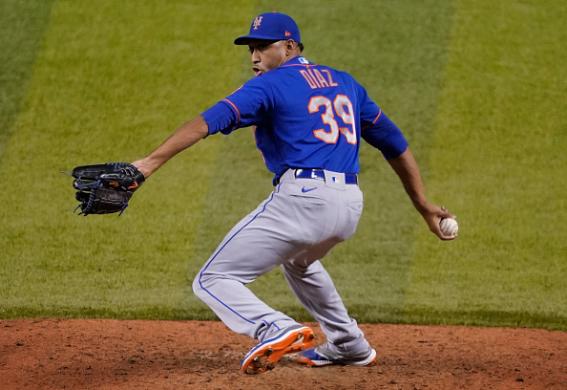 This almost feels like a week off from the Bullpen Report as for once half of the teams didn’t have their bullpens implode or change closers, which is a refreshing change. My big eraser has still been working plenty this week, so let’s get going with this week’s installment. The closer’s grid at the end of this article is constantly updated when needed under MLB Tools on Fantasy Alarm and can be found here if you need updates on days this article isn’t posted. I usually do a quick blurb of what has changed from the previous update.

Trevor Rosenthal , Kansas City Royals. He has four saves in the last week and a half and the guy has been mostly dominating. He did walk three guys in one appearance but didn’t give up any runs and got that save. The Royals are only looking to him to finish out games right now. It was five years ago now, but Rosenthal has had back to back 40 save seasons in his career, so this is likely no fluke. Rosenthal should be an absolute stud for the rest of the season, the only concern could be if the Royals trade if a team makes a push for a closer down the stretch.

Rafael Montero , Texas Rangers. Considering he had no closing experience in his career, I have to admit that this one is a little surprising. However, there is no doubting the results. Montero did give up the walk off grand slam to Manny Machado last night, but he has still been incredible to this point and that was the first time he showed any weakness. The Rangers have no other viable options and Montero should be fine going forward.

Drew Pomeranz , San Diego Padres. The season ending injury to Kirby Yates puts Pomeranz in the driver’s seat for saves going forward for the Pads. Truth be told, Pomeranz was pitching better than Yates in 2020 anyway. In ten appearances he has five holds and four saves, and you can expect a rash of saves going forward. Pomeranz has been absolutely dominating as he has allowed just one hit in nine shutout innings and has struck out 12. He has no significant closing experience in his career, but he is pitching absolutely lights out right now.

Héctor Neris , Philadelphia Phillies. He gave up four runs in two blown saves on the 11th and 14th, but Neris got his stuff together his last time out even though it was in a non-save situation. Neris has held the job down pretty well in two of the last three seasons and was doing well until those two awful outings. The Phillies don’t really have a reliable option to go to if they wanted to replace Neris, so this isn’t a situation that might get changed in my opinion. Obviously, he will have to continue to pitch well, but if I was a Neris owner I wouldn’t freak out.

Anthony Bass , Toronto Blue Jays. There seems to be plenty of chatter in the fantasy baseball world about Bass being replaced and I just don’t see it. The guy had one bad game where he allowed three runs and blew a save, and other than that he has been nearly flawless. He has allowed five hits and struck out nine batters in 11 innings, and even picked up a win in two innings of relief on Tuesday. Rafael Dolis did pick up a save on Wednesday, but Bass had pitched on back to back days, including 29 pitches to get that win on Tuesday. It is still his job, and I don’t see him relinquishing it any time soon.

Rowan Wick , Chicago Cubs. At one point, Wick gave up a run in a save chance, and then was put in earlier in the game his next time out. Meanwhile, Craig Kimbrel was pitching a little better. Wick was dominant Tuesday night against the Cardinals with three strikeouts in his fourth save and he should continue to hold a grip on the job. Kimbrel did get the save on Wednesday, but Wick had thrown two straight days and the manager surely didn’t want to burn through the whole bullpen during a doubleheader. He did strikeout three, but Wick should still have a decent hold on this job for now.

Taylor Rogers , Minnesota Twins. Sergio Romo continues to pitch better and get his hands on some save chances along the way too, crushing Rogers value. He certainly isn’t doing himself any favors right now as he blew his second save in just over a week on Wednesday night. He keeps finding his way back into the ninth inning, but he really has to be careful here. Romo has closed games in the past and is helping his own cause. Rogers looks to still have the job, but Romo will get his and is just waiting to take the job.

Anthony Miller, St. Louis Cardinals. He has a history of being used (very well) in high leverage situations in his career, but rarely has held the closer’s role. While who had the job for the Cardinals coming into the year, no one thought that Miller was in line for it when the team moved Kwang Hyun Kim into the starting rotation after the team’s long Covid layover. However, it was Miller who got the first two saves for St. Louis when everyone was predicting Giovanny Gallegos or Ryan Helsley would get the ninth inning. Well, we saw the first flaw in Miller as he coughed up the lead in the second game of the doubleheader on Wednesday. I do not expect Miller to hold this job, and I still expect Helsley to be the man with Gallegos second in line. Right now, the whole situation is tough with the Cardinals trying to make up so many games and their pitching is a mess to predict. You are likely better served looking in another direction at the moment.

Edwin Díaz , New York Mets. Word came down that Seth Lugo is heading to the rotation, and that opens the door for Diaz to try to reclaim his ninth inning job again. We know GM Brodie VanWagenen wants to give him every chance to finally hold this job to validate trading for Diaz. He has been striking guys out at an amazing rate with 24 whiffs in just 10.2 innings, but he is still getting hit. He came into a bases loaded jam thanks to Dellin Betances last night before blowing the save by walking in a run, but he ended up with the win anyway. Diaz is a roller coaster for sure, but it appears he is getting set to claim his ninth inning role again. Behind him, Betances has been a disaster, which could mean Jeurys Familia or Justin Wilson could be in line if Diaz falters or needs a day off. I’m sure Mets fans cringe at the thought of Familia closing games again.

Trevor Gott , San Francisco Giants. While he was an unexpected surprise to start the season, Gott blew up like fireworks on the Fourth of July this past week. He blew two straight saves, and also got torn up in a third appearance since August 14th. Giants Manager Gabe Kapler has proven to be a little out of the ordinary in his short career, and he showed it again as he allowed his “closer” to give up 11 runs in 1.1 innings over three appearances during that stretch. If Gott sees the light of day in the ninth inning again this season, I will be shocked. Tony Watson was the presumed closer coming into the year who hasn’t even gotten a save chance yet. He has pitched well and could slide into the role. My favorite for the job is Tyler Rogers who is brother of Twins close Taylor Rogers . Why parents named two kids such similar names is beyond me, but that is not relevant here. After getting off to a rough start to the year, Rogers hasn’t allowed a run in his last five outings and did get a save on August 11th. He has the most dominating stuff in the Giants bullpen and deserves to be the closer. I still feel that Watson might get the first shot now that Gott is out, but Rogers should take over at some point.

Nick Anderson , Tampa Bay Rays. This is the most frustrating one because the team is actually good. However, Nick Anderson , Oliver Drake , Andrew Kittredge , Chaz Roe , Anthony Banda , Jalen Beeks , and the legendary Aaron Slegers all have saves for the Rays. That is ten different pitchers have saves in their 16 wins. All of them have high ERAs, but Anderson is the only guy to own here. First, he also has four holds, and is the only guy in the group with more than one and that likely holds some value in your league. He also has 15 strikeouts in 9.1 innings, which obviously also helps you. You are best off avoiding this ridiculous situation all together, but if you are forced to deal with it Anderson is the best choice. 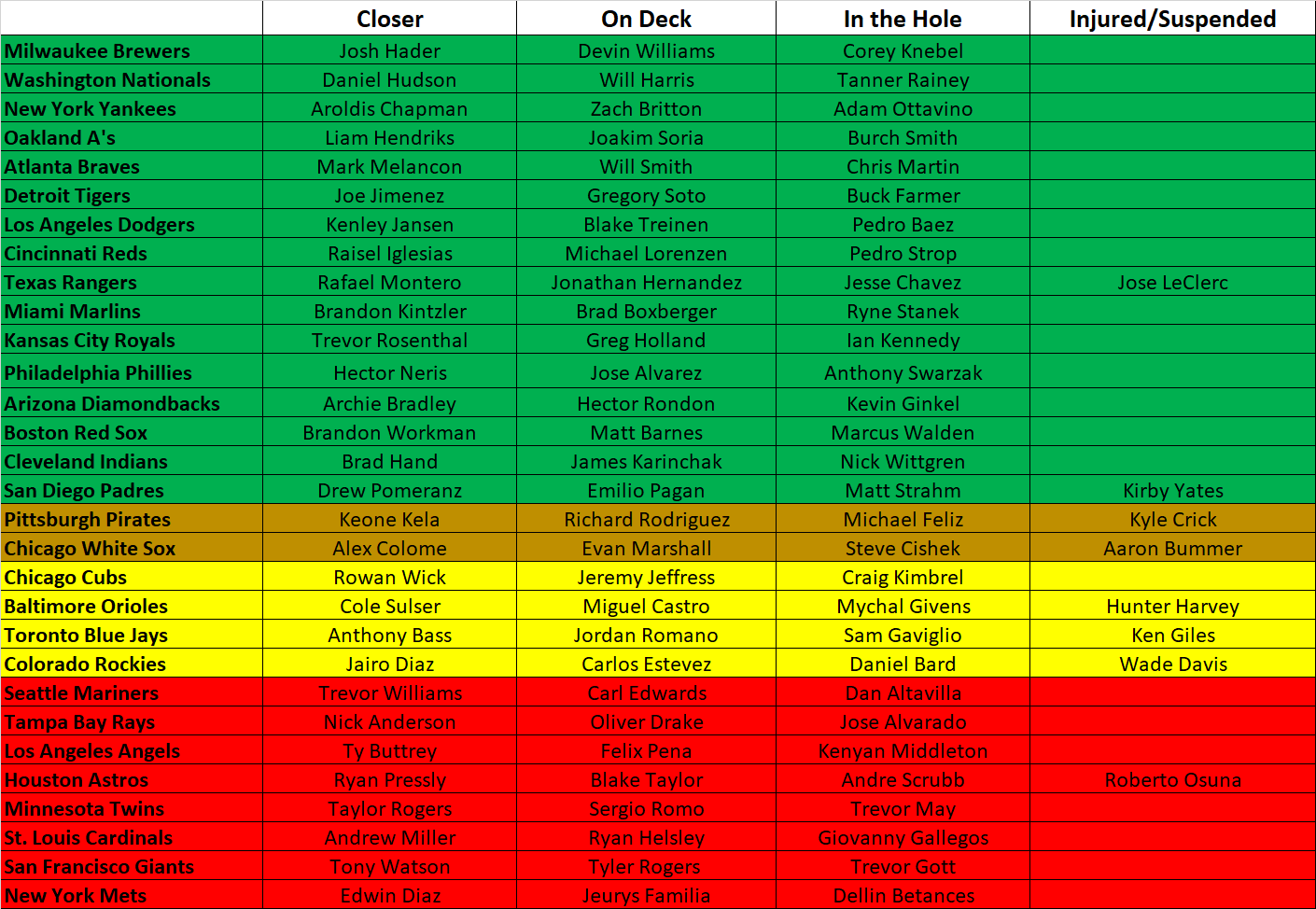