Justin Vreeland is here to bring you the latest news from the around the league. 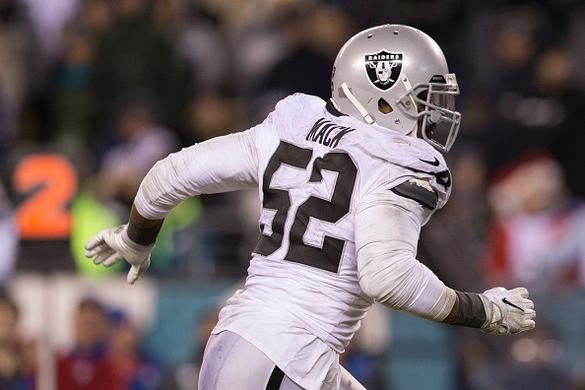 With NFL teams trimming down to their 53-man rosters for the start of the season, we will breakdown some of the more notable moves today. 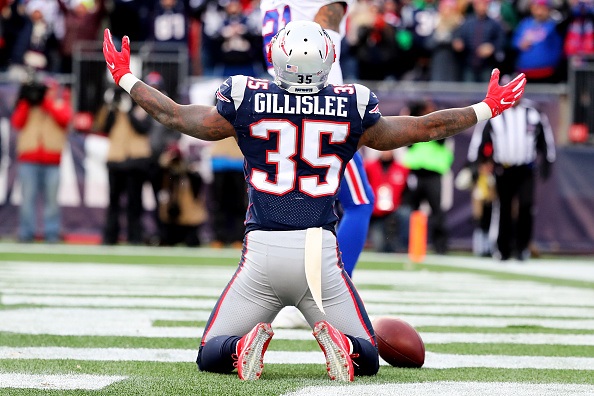 Mike Gillislee , as I stated last week, was an expected cut by the Patriots and that came to fruition today. I don’t think it will take long for Gillislee to land a job on a new team and if he finds the right home he could be fantasy relevant at some point this season. The Pats decided to roll with Jeremy Hill as their short yardage back.

Martavis Bryant ’s messy career continued today as he was let go by the Raiders. He has been a huge disappointment and fantasy owners hoping to hit big on a last round flier may need to look elsewhere. It would not be surprising to see him find a new team, but don’t expect much out of him.

Breshad Perriman , a former first round pick by the Ravens, was let go today by the team. He has not been impressive in his career and there is not any reason to think that will change even if he finds a new team.

Dan Bailey was a surprise cut by the Cowboys as they decided to move forward with Brett Maher . Bailey has an 88.2% field goal conversion rate for his career and it should not take him long to find work. Someone is going to pick him up and make him their starting kicker.

Corey Coleman was let go by the Bills after a disappointing camp. He has flashed some talent in his career, but hasn’t shown the ability to stay healthy or consistently come down with some passes that he should. Someone is going to pick him up, but he is unlikely to make an immediate impact.

Thomas Rawls career spiral since an impressive rookie year continued today as he was unable to crack the Jets roster. This was an expected move and one that could mean the end for Rawls. If he is able to find a job somewhere it will be at the end of the depth chart. Rawls has been unable to stay on the field and it has really derailed his career.

Braxton Miller was a surprise cut by the Texans yesterday. This was good news for Bruce Ellington who now has a clear role as the number three option in Houston’s passing attack. Miller should be able to find a spot on someone’s roster but is not a very promising player for fantasy this year.

De’Angelo Henderson was unable to beat out rookie Phillip Lindsay for the number three role in the Broncos backfield and as a result, he was let go by the team. Henderson has looked good at times in the preseason and should find a job quickly. However, he is not fantasy relevant regardless of where he lands.

Roberto Aguayo lost the Chargers kicking battle despite a strong preseason. The team chose to go with veteran Caleb Sturgis as expected. Now that Sturgis has officially won the job, he makes for a very interesting late round or wire grab in fantasy as the Chargers offense is a good one and Sturgis has already shown us a strong fantasy campaign back in 2016 with the Eagles.

Bo Scarbrough was let go by the Cowboys after a weak preseason. He finished the preseason with 69 yards on 24 carries (2.88 YPC) and did not impress Dallas enough for them to keep their 7th round selection in this year’s draft. He will end up on a practice squad. 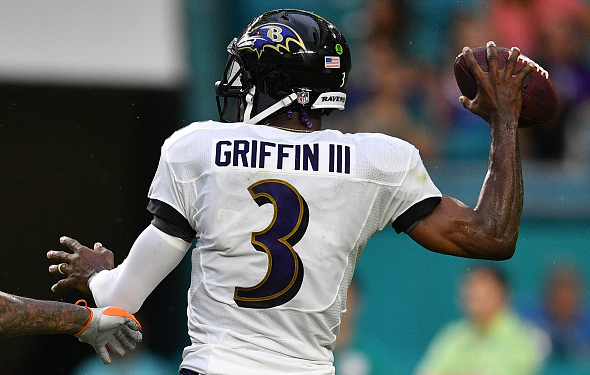 Robert Griffin III performed well in preseason and earned a spot on the Ravens as the 3rd string QB. They may still look to trade him, but for now he is on the team.

Jeff Driskel will be the Bengals backup QB. He has shown some playmaking ability, but also a lot of inconsistency. He would make for an interesting pickup in fantasy if Dalton were to go down.

Joshua Dobbs and Mason Rudolph have both made the Steelers roster after the team decided to move on from Landry Jones . Dobbs will operate as the number two QB, while the rookie Rudolph will simply look to progress towards being the team’s future QB.

Paxton Lynch was in danger of being cut by the Broncos, but after an impressive game in the last game of the preseason he saved his job for now. He will be the team’s number three QB behind Case Keenum and Chad Kelly .

D’Onta Foreman (Achillies) will start the year on the PUP list; he will be out for the first six weeks.

Braxton Berrios is being placed on injured reserve.

Evan Engram (concussion) is expected to be healthy and ready for the Giants week 1 matchup with the Jaguars.

Byron Maxwell has been placed on injured reserve.

Jerick McKinnon suffered a torn ACL in practice today and his season is done. This is brutal news to many of you I’m sure, I know it is for me in a league or two. Alfred Morris and Matt Breida should be added where you can, with Morris being my 1A and Breida 1B. 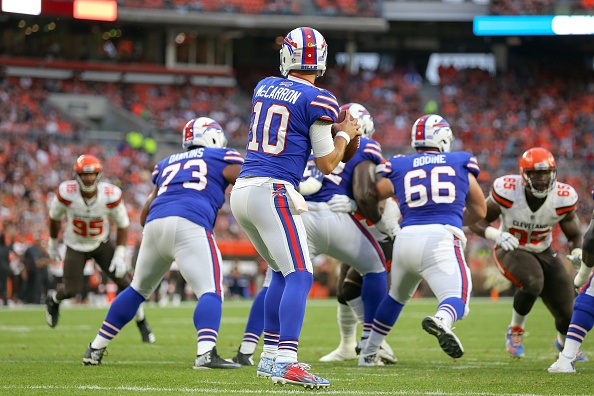 We will start with the biggest news of the day: Khalil Mack was traded to the Bears. The Bears DST now make for an interesting late round selection in fantasy. This also helps Jordan Howard , who should now play in more close games and games with a lead. A big win for the 2018 Bears.

A.J. McCarron has been traded to the Raiders. The Bills decided they felt good enough with Nathan Peterman and rookie Josh Allen so they pulled the plug on the McCarron experiment. Meanwhile, the Raiders stated last week they did not feel like they had a backup QB, so they decided to make a move for one. Connor Cook was let go by Oakland and McCarron will be the team’s primary backup to Derek Carr .

D. Jackson - DB
BUF
Bills removed DB Dane Jackson from the team's COVID-19 list.
The Bills also released undrafted rookie DB Garrett Taylor. Jackson is the fourth Buffalo player to come off the COVID-19 list this week. The team's defense has taken a hit during the league's opt-out period, with DL Star Lotulelei and CB E.J. Gaines opting out of the 2020 season. Stud CB Tre'Davious White said yesterday that he's considering opting out. A tough matchup for opposing passing games in 2019, Buffalo's defense might be a target for fantasy managers in 2020.
Added 11:16 am (EST)
Added 11:16 am (EST)

C. Matthews - LB
LA
NFL Media's Michael Silver reports the Seahawks have "interest" in free agents Clay Matthews and Everson Griffen.
It would reportedly be a pivot from signing Jadeveon Clowney, whose contract demands remain insistent beyond what the organization is willing to pay. Both Matthews and Griffen were coached by Pete Carroll at USC, so both are familiar with Seattle's scheme in a pinch. Matthews hasn't garnered much interest since being released from the Rams in March, so it wouldn't be shocking if this connection blossomed into a one-year deal. The Packers have also been linked to Griffen in the open market.
Added 11:15 am (EST)
Added 11:15 am (EST)

L. Niang - OT
KC
Chiefs third-round OT Lucas Niang has opted out of the 2020 season.
Viewed as a potential replacement for Laurent Duvernay-Tardif, Niang (6’6/315) will instead join the latter in voluntarily stepping away. He'll return fresh in 2021 following hip surgery that kept him out of the Horned Frogs' final five games of 2019, as well as the 2020 Senior Bowl and entire draft process. Veteran Mike Remmers and second-year OL Nick Allegretti remain the favorites to step in for LDT.
Added 9:46 am (EST)
Added 9:46 am (EST)

H. Ruggs - WR
LV1
Raiders OC Greg Olson said first-round WR Henry Ruggs will start in the slot.
“We’ll start with Ruggs III in the slot and do some things with Ruggs III," Olson said. "But those guys (Ruggs and Bryan Edwards) are very multiple in what they can do and that’s the goal is to be able to move all of them around to different spots; the one, two or three position at the wide receiver.” Ruggs is no stranger to that role as he ran 18.4% of his routes from the slot in his final year at Alabama, but it's an important note since it would oddly leave Hunter Renfrow, who led Las Vegas' wide receivers in targets (71) last year, off the field. Tyrell Williams and third-rounder Bryan Edwards (6’3/212), who totaled the third-most receptions (324) and fourth-most receiving yards (3,045) in SEC history as a four-year starter at South Carolina, are expected to start at the team's X and Z positions on the outside.
Added 9:18 am (EST)
Added 9:18 am (EST)

S. Diggs - WR
BUF
Bills restructured Stefon Diggs' contract.
Buffalo will give Diggs $3.3 million more in 2020 while reducing some of his salary in the later years of his contract. It's an insignificant move for Diggs' short- and long-term outlook with Bills. For fantasy purposes, Diggs needs to get better deep-ball accuracy out of Josh Allen to reach his ceiling. They've been working together this offseason -- that, of course, includes playing video games together -- and expect to have chemistry in 2020 despite limited in-person practices. Diggs will likely be a fantasy WR3 who has a handful of boom and bust weeks. Stacking Allen with Diggs has been a common strategy in bestball formats this summer.
Added Yesterday 3:50 pm (EST)
Added Yesterday 3:50 pm (EST)