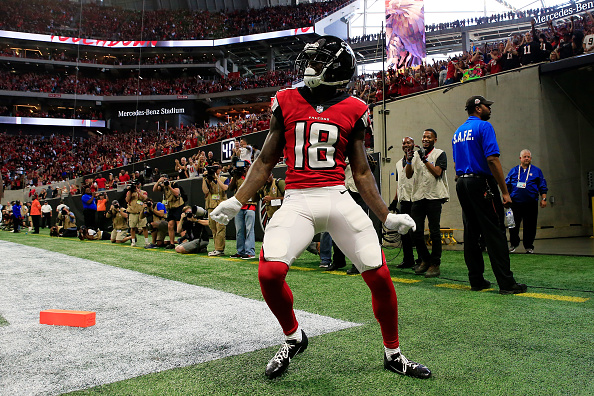 So Week 3 saw a significant injury to Jimmy Garoppolo that’ll cost him the rest of this season while Dalvin Cook , Leonard Fournette , and Devonta Freeman remained on the sidelines. We also saw a few wide receivers emerge as potential flex options so it’s time to bunker down after a rough week and get back on track with some key additions on waivers. Please note this article focuses on players that are owned in less than 50% of leagues across the varying sites in this industry.

(Note: The FAAB bids are represented in a percentage of your budget. No FAAB budget is the same. Some leagues do a $100 budget, others do $200 or all the way up to $1,000. Use the percentages as a guide to determine how much you should bid for these players.) 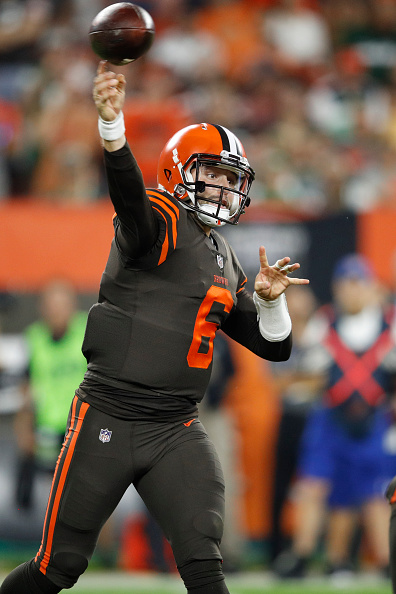 Baker Mayfield (QB – Cleveland Browns; FAAB Bid: 15-20%) We’ll address possibly the hottest name on the market right now and yes I’m willing to spend extra on a quarterback specifically to acquire Mayfield. Yes, he’s a rookie. Yes, he plays for the Browns. But anyone with eyeballs can see how composed and confident he is in the pocket. He has one of the tightest spirals you’ll ever see from a rookie quarterback and this offense struggled to get anything going with TyRod Taylor . Taylor may just not be a good fit to run Todd Haley’s offense. Baker came in and executed with ease to help the Browns get their first win since 2016. For anyone who lost Jimmy Garoppolo or if you’ve been stashing Jameis Winston and are worried he’ll be stuck behind Ryan Fitzpatrick , don’t hesitate to pull the trigger on a hefty bid for Mayfield. He won’t reach the levels of Patrick Mahomes this year, but he could salvage your season. This isn’t just a recommendation for shallower leagues. He should probably be grabbed in all leagues at this point.

Aaron Jones (RB – Green Bay Packers; FAAB Bid: 30-40%) This is a guy I’m willing to pay good money for because of the limited options at running back on the waiver wire. Jamaal Williams has failed to take advantage of his audition as the lead running back in Green Bay and this leaves the door open for a fresher Aaron Jones . In a small sample size last season Jones averaged 5.5 yards per carry. On six carries this past Sunday he accumulated 42 yards. The Packers will have some troubles going forward with an injury to Bryan Bulaga and Aaron Rodgers playing on one good knee. The Packers running backs in general may be facing stacked defensive fronts and this could be difficult going forward. However, Jones is the most talented back on that roster and should see the workload expand as the season goes on.

Javorius Allen (RB – Baltimore Ravens; FAAB Bid: 15-18%) I really hate to even bid this much on a guy who has just 32 rushing yards on 16 attempts through three games. However, said player also has four total touchdowns to go with 13 receptions for 70 receiving yards. To say he’s touchdown dependent would be a hilarious understatement. In standard scoring leagues the four touchdowns represent 24 points of the 33.5 he’s totaled so far this year. But again, running backs are hard to come by and Baltimore still seems somewhat committed to feeding him at the goal line. Right now he’s a top 20 running back in PPR formats and you obviously don’t expect him to maintain this production. But given how valuable running backs are it doesn’t hurt to grab and stash this guy. Who knows what could happen if Alex Collins went down with an injury.

Calvin Ridley (WR – Atlanta Falcons; FAAB Bid: 22%) I’ve been quite low on Calvin Ridley for most of the season and it’s about time I change that tune. One cannot possibly argue against four touchdowns over the past two weeks and while it’s obvious they still want to get Julio involved, especially in the red zone, there will be enough targets to go around to feature Ridley. The Falcons suffered another devastating injury on defense to Ricardo Allen after losing Keanu Neal and Deion Jones last week. This could lead to more high scoring affairs for the Falcons down the line if defenses can casually hang points on them. And this is where the potential for Ridley to continue this run lies. Julio Jones will get his, as will Sanu and Hooper, and Devonta Freeman when he does return. But Ridley figures to remain a featured part of this offense going forward.

John Brown (WR – Baltimore Ravens; FAAB Bid: 12-15%) Smoky Brown isn’t the sexiest name on the board, but he’s putting up decent production to warrant consideration as your third wide receiver or even a flex option in PPR formats. He definitely has big play potential as he’s averaging 18.5 yards per catch with a pair of touchdowns so far this season. He’s displayed a solid connection with Joe Flacco , but there will be some frustrating games with Brown. The Ravens are about to embark on a three-game road trip and four of their next five will be away from Baltimore as well. He’s still worth taking a look at next week against a weak Pittsburgh defense.

Tyler Eifert (TE – Cincinnati Bengals; FAAB Bid: 15%) It’s hard not getting excited about Eifert. Everyone knows about his injury history, it’s fairly well documented. And the Bengals are certainly weary of it as well as they have yet to fully unleash Eifert to the masses and he’s yet to find the end zone. He had his best performance to date against Carolina to the tune of six catches for 74 yards. If he stays healthy he can only get better.

Andy Dalton (QB – Cincinnati Bengals; FAAB Bid: 8-10%) The Bengals, despite losing on Sunday, may still have something going on with this offense. Dalton had a relatively bad day by throwing four picks but he still tallied over 350 passing yards and he gets a phenomenal matchup next against a beat up Atlanta secondary. Following that matchup he has a fairly easy schedule leading up to Cincinnati’s bye week. He’s certainly streamable next week and possibly beyond.

Blake Bortles (QB – Jacksonville Jaguars; FAAB Bid: 5%) Bortles and the Jaguars played a very uncharacteristic game against a seemingly inferior Titans team and lost 9-6 this past Sunday. Don’t be fooled into expecting that to continue. The next three games for Jacksonville include the Jets, Chiefs, and Cowboys. The Dallas secondary is a bit underrated, but Bortles could still deliver a 20-point performance. He’s most certainly streamable against the Chiefs secondary in Week 5. If you miss out on Baker Mayfield , Bortles isn’t a terrible short-term quarterback to consider. He does have a favorable schedule after the Jaguars bye in Week 9.

Ronald Jones (RB – Tampa Bay Buccaneers; FAAB Bid: 5-10%) It’s difficult to gauge Jones’ value because he’s yet to play and the Bucs have ruled him inactive for the first three weeks. They’ll have to deal with a quick turnaround this week in order to prepare for the Bears in Chicago on a short week. Peyton Barber has hardly looked explosive and Jacquizz Rodgers poses no threat to Jones. The rookie did have a terrible training camp, but if this hot start by the Bucs proves to be just lightning in a bottle then they shouldn’t hesitate to take a shot on Jones.

Mike Williams (WR – Los Angeles Chargers; FAAB Bid: 15-18%) The budding relationship between Philip Rivers and Mike Williams continues to be quite the magical experience. The efficiency probably isn’t sustainable, but Williams did bring in four catches for 81 yards and a pair of touchdowns against the Rams. Hopefully you jumped on Williams last week when he was recommended in shallower leagues, but the secret might be out on the Chargers second-year receiver who might as well be considered a rookie after missing all of last season.

Tyler Boyd (WR – Cincinnati Bengals; FAAB Bid: 15-18%) Well it looks like the Bengals have found their second wide receiver to A.J. Green . Over his last two games Boyd has 12 catches for 223 yards and a pair of touchdowns. Next week the Bengals visit Atlanta to play against a Falcons defense that’ll be without Keanu Neal , Deion Jones , and Ricardo Allen .  Following Atlanta the Bengals will play Miami, Pittsburgh, Kansas City, and then Tampa Bay before hitting their bye week and none of those secondaries pose a significant threat. 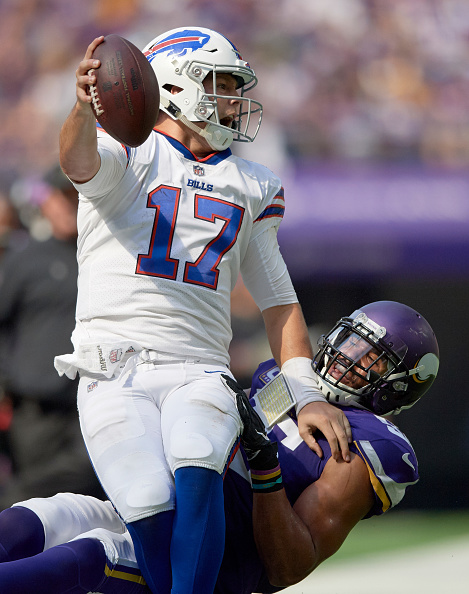 Josh Allen (QB – Buffalo Bills) and Josh Rosen (QB – Arizona Cardinals) Going to group the Brothers Joshua together. Alright, they’re not really brothers, but they’re both rookie quarterbacks and they’re both named Josh and I’m all about efficiency with this piece. I’d favor Allen a little bit more than Rosen right now. However, given the offensive weapons at Rosen’s disposal I’m inclined to like him a little more as the season progresses as he gets first-team reps with the offense. Wouldn’t go too crazy with a FAAB bid here. Hopefully you aren’t desperate for one of these players but if you are a Jimmy Garoppolo , Sam Bradford , or TyRod Taylor owner (and missed out on Mayfield) then you can take a chance on one of these guys. Wouldn’t put more than a 6% bid on them unless you truly need them. You might even be able to get them for free.

Chris Ivory (RB – Buffalo Bills; FAAB Bid: 10-12%) In deeper leagues you shouldn’t hesitate to grab Ivory considering he’s available in about 95% of ESPN leagues. His production is dependent on LeSean McCoy being inactive, but he did just have a nice fantasy performance against one of the best defenses in the league. Ivory’s numbers from Sunday are a bit fluky because he had three catches for 70 yards, but in deeper leagues where the talent pool is very shallow, you might need to pay up based on Sunday’s game.

Antonio Callaway (WR – Cleveland Browns; FAAB Bid: 15-20%) Callaway’s an obvious name to consider adding when you look at his production since the Browns decided to part ways with Josh Gordon . Over his last two games Callaway has seven catches on 14 targets for 101 yards and a touchdown. With Baker Mayfield now running the offense there’s at least some reasonable upside for the rookie to be a decent flex play in deeper leagues.

Christian Kirk (WR – Arizona Cardinals; FAAB Bid: 10-13%) Kirk has needed an injury to Larry Fitzgerald , but he’s seen his workload gradually increase over the first three games of the season. This past Sunday he brought in seven catches on eight targets for 90 yards. Even when Josh Rosen took over for Sam Bradford late in Sunday’s game against the Bears, Rosen did manage to target Kirk three times over the final two series of the game.

Dallas Goedert (TE – Philadelphia Eagles; FAAB Bid: 1-5%) If you can somehow get Goedert for free then you can certainly try, but coming off his most recent performance that seems unlikely. Goedert brought in all seven of his targets for 73 yards and a touchdown in Carson Wentz ’s return for the Eagles. Wentz has shown a propensity for favoring his tight ends so Goedert does have some deep league appeal if you are without a better option.