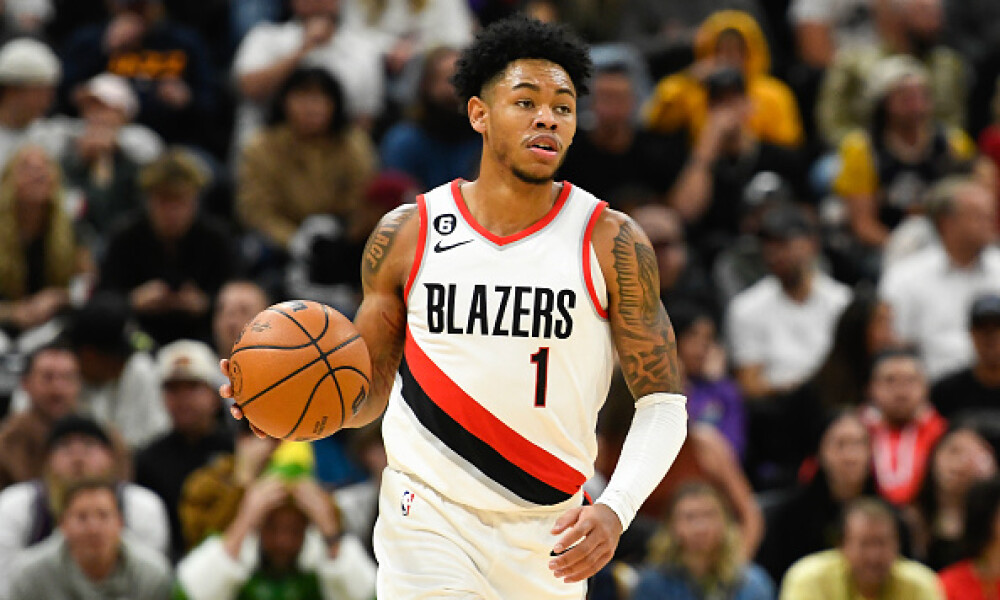 The Indiana Pacers and the Portland Trail Blazers have started off the 2022-2023 NBA season strong. The Pacers are the fastest moving team in the NBA and they score about 116 points per game. As they get ready for their first of two NBA matchups this season against Portland, we don’t know if they’ll be without their prioritized scorer and ball handler Tyrese Haliburton as he’s dealing with an injured groin and is questionable for tonight’s game. While the Blazers are on the other end of the spectrum as one of the slowest-paced teams in the NBA, they are also dealing with injuries as their top-scorer Damian Lillard continues to sit with a calf injury. The Blazers are also dealing with a few mid-court injuries and this game has a high sportsbook total of 232. Here are a few options we can rely on for showdown DFS NBA for later today.

With the pace of this game heavily favoring the Blazers, Simons will likely be the most popular MVP pick for the day. He’s taken at least 22 shots in 4 of his last 5 games and he shot at least 52 percent from the floor in 3 of those contests. The Blazers were in Utah last night, but because of all their injuries, they can’t afford to limit Simons’ minutes. Simons also provides defensive relief as well grabbing three boards and a steal per battle. Simons will continue to produce more assists than he normally averages because of Lillard being sidelined. The Pacers are a bottom-10 team at guarding guards and with the current active Blazers confirmed for tonight’s game, Lillard is looking at a usage percentage over 32 and that translates to 1.37 fantasy points per minute. Simons is a strong outside shooter hitting over 39 percent of his long-distance shots. Simons didn’t see much of a minutes reduction the last time he was coming off of the first leg of the back-to-back and he should be looking at around 40 minutes tonight.

Haliburton is a big part of the Pacers future and especially with them playing as well as they’ve played, they won’t mess around if Haliburton’s groin injury is acting up meaning if he plays, we can assume he’s pain-free or close to it. If we find that Haliburton is going to have his minutes monitored, pivot to another option but it’s hard to fade Haliburton if he’s out there unrestricted. He should be looking at 16-20 shots and he’s scored over 19 points per year. He’s been shooting 46 percent from the field and he’s very good at attacking the rim and with the Blazers likely a bit fatigued and short-handed, Haliburton can use his speed to take advantage of the Blazers in the lane. Haliburton also drops around 11 dimes per contest, and he’s stolen the ball multiple times in 4 of his last 5 games. He’s even been helping clean the glass a lot more lately. Haliburton is currently questionable and make sure you’re watching the news to see if not only Haliburton is active, but also if he’s going to be limited.

If Josh Hart sits again, Grant (like Simons) is looking at a usage percentage exceeding 32 and a heck of a lot of shots. He’s sunk 50 percent of his shots or more in 4 of his last 6 games. Grant has hit the 20-shot mark a lot recently. Grant has scored 22.7 points per game. Grant has also been a strong floor-stretcher this season hitting over 47 percent of his three-pointers. Grant will play heavy minutes and he’s produced two multi-steal games in his last three. Grant has also swatted away shots in three of his last five contests. The volume will be there for him on offense, and he’ll even need to help move the ball around more as well. We’ve seen him post a few five-assist games lately.  Jalen Smith isn’t that quick, and Grant will be able to get open looks from the elbow off screens. With the active Blazers, he averages 1.17 fantasy points per minute. Grant plays at least 36 minutes per game.

Nurkic is averaging a double-double and with the Blazers limited in personnel, he should once again find himself taking double-digit field goals. Nurkic has pulled down 14 rebounds in 2 of his last 4 games and he’s needed to play heavy minutes recently hitting the 30-minute mark in 5 straight battles. The Pacers play the weakest defense versus centers and Nurkic should fully be able to get inside and bang around with Myles Turner. Nurkic has also swatted away shots in five straight games. He will pop out to the arc if the lane is clogged, and the shot-clock is winding down, but he’ll mainly produce from the post. Nurkic won’t always put his head down and barrel his way down the lane, he’ll look for the cutter or open man at the arc and he’s dropped four or more times in four of his last five outings. Nurkic shoots over 50 percent from the field which bodes well for him in this pace-up spot.

The Blazers are also a bottom-10 defense versus centers and Turner has taken no fewer than 9 shots in 8 straight contests. Turner has been scoring over 17 points per game and he’s shooting 54 percent from the floor. Turner is a more reliable outside shooter than Nurkic and he sinks over 38 percent from long-range. Don’t get discouraged regarding Turner’s minutes because the Pacers have been on the losing end of a few blowouts lately, but the Blazers are only favored by two and a half points and Turner should play 30-33 minutes this evening. Speaking of two and a half, that’s how many shots Turner blocks per game. He’s posted two three-block games in his last three. Turner’s rebounding has been a bit down lately, but the last time he hit the 30-minute mark he ripped down a season-high 13 boards. Turner is grabbing eight rebounds per game.

Winslow is another player who’s needed to play deep into games and especially with Nassir Little hurt, Winslow is going to get more shots. He’s taken 10 or more shots in 5 of his last 6 games. He’s played no fewer than 34 minutes in 5 straight contests. He grabbed seven-plus boards in four games during that span. He steals 1.1 balls per contest, and he’s been helping set his teammates up on offense and he’s dropping 4 or more dimes in 5 of his last 6 battles. Josh Hart’s status will impact Winslow’s minutes and usage and if Hart once again sits with his injured ankle, Winslow will spend some time bringing up the ball. He’s hit 50 percent of his field goals in 2 of his last 4 contests. The Pacers rank 21st in the league at defending small forwards and Winslow will rotate between both forward spots. The pace boost will serve Winslow well even if he doesn’t start.

Hield and his teammate Bennedict Mathurin become a ton more valuable if Haliburton sits. Hield should be looking at 10-13 shots tonight and he’s taken 13 or more shots in 6 of his last 7 contests. Hield has around a 23 percent usage rate and he scores over 16 points per game. On the defensive side of the ball, he grabs over four rebounds and steals a ball per game. He’ll need to help run the offense a bit more if Haliburton doesn’t play and with Chris Duarte still out, Hield could be looking at a slight uptick in assists. Hield should play at least 30 minutes tonight and he’s played 31 minutes or more in 4 of his last 6 outings and the Pacers shouldn’t get blown out by the damaged Blazers and we shouldn’t see him pulled from the game early. Mathurin is a little cheaper and if Haliburton sits, Hield will see more shots and Mathurin will revert to running the offense a bit more featuring Hield as the primary scorer.

Nassir Little being sidelined gives Watford more opportunities to play and if Hart sits, Winslow will have to shift down to small forward and Watford will see more minutes at power forward. Watford has pulled down 10 or more rebounds and played at least 31 minutes in both of his last 2 outings. He posted a double-double in one of those outings and with the Pacers weak at defending frontcourts, Watford should have easier trips to the basket. He should take 5-9 shots this evening. Watford can hit long-range shots, but he mainly lines up in the post. Watford is a big body on a team that doesn’t have a lot of big bodies and this matchup is a tremendous pace boost for Portland. The double-double Watford recently posted was against the Lakers, another weak defensive team versus big men. He’s scored nine or more points in both of his last two outings.

Nembhard has been playing more minutes recently and with those minutes have come more shot attempts. Nembhard has been very clutch lately as well, hitting a game-winning buzzer-beating three-pointer against the Lakers and scored 12 points in that game and then notched a double-double a couple of games later against the Jazz by scoring 13 points and dishing 10 assists. Nembhard also grabs nearly a steal per outing, and he’s swiped balls in three of his last four games. He’s shot under 40 percent from the filed just once in his last eight battles. He’ll balance out his offense by taking shots from beyond the arc and inside the arc and we can’t attribute his recent minutes boost to blowout run as he played nearly 30 minutes versus the Lakers in the game he played hero in. He’ll get more time with the ball if Haliburton sits.