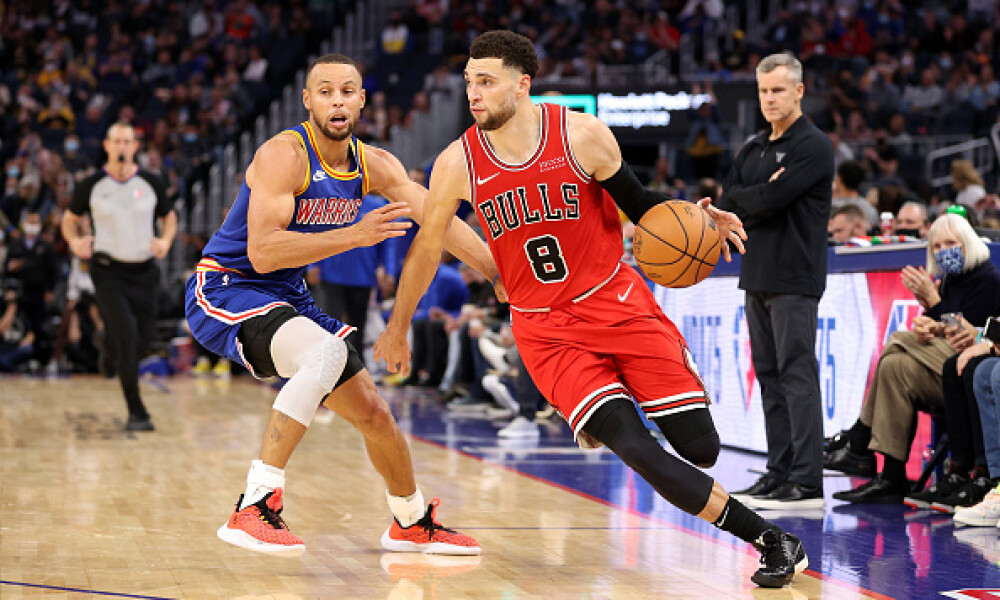 The Chicago Bulls-Golden State Warriors NBA matchup has a high game total across sportsbooks at 237 with the Warriors favored by 7 points. Both teams rank in the top nine in the NBA in pace of play and we should see a swift back and forth in this matchup. The Warriors allow 117.2 points per game to be scored on them which is tied for 2nd most in the western conference and 3rd most in the league. Chicago lets up over 112 points per contest on the basketball court. Here are a few options we can rely on for the showdown DFS NBA later today.

Even though the Bulls rank in the top 10 at guarding point guards, Curry continues to see a lot of shots and in an expected fast-paced game, he should be able to thrive. He just dropped 32 points on the Dallas Mavericks who are staunch defensively against opposing point guards His shot total should be in the 20s tonight and he’s contributing a steady dose of rebounds and assists and should play at least 35 minutes tonight Curry is even grabbing 1.1 steals per game. Curry is shooting nearly 52 percent from the floor and over 43 percent from beyond the arc. The one issue with Curry in recent games has involved turning the ball over which takes away from his overall production. If the Warriors end up blowing out the Bulls tonight, Curry should still hit the 30-minute mark. He’s one of the strongest scorers in the league and even in a tougher matchup, he should be able to overcome any difficulties we should expect him to take most of his shots from downtown tonight.

The Warriors rank 23rd at defending shooting guards and with the pace favoring Chicago, LaVine is in a prime spot to produce. He’s scored 20-plus points in 4 of his last 5 battles and we should expect him to take around 20 shots tonight. After bricking a good number of shots overall in recent games, LaVine bounced back last game shooting over 46 percent from the floor versus the Suns. He’s produced a few more boards and dimes recently contributing five or more assists in five straight contests and grabbed five-plus boards in four of those games. He helps on the defensive end by consistently stealing the ball swiping 1.1 balls per game. LaVine has a usage percentage nearing 28 and averages over a fantasy point per minute this season. We should expect him to play around 35 minutes tonight and even last game we saw him log 34 minutes even with the Suns up big.

DeRozan shoots 52 percent from the floor and most of his production comes inside the arc on offense. He’ll shoot from the outside if open or if the shot clock is winding down. DeRozan has exceeded his 26.3 scoring average in 6 of his last 7 battles. Once he drives by Draymond Green in the post, DeRozan should have an easy time scoring the ball and positioning himself to keep the play alive if the Bulls shots aren’t falling. He should be able to control the paint. DeRozan has also dropped six or more dimes in three of his last four outings and he’ll play aggressive defense in the lane. DeRozan has posted steals in four of his last five games and the pace favoring the Bulls should benefit DeRozan. He even has a higher usage rate than Zach LaVine nearing 30 percent. He draws a lot of contact as well and he’s very accurate hitting 88 percent of his free throws.

The Warriors rank 18th at covering centers and Kevon Looney will have trouble containing Vucevic in the post. He’ll also help stretch the floor and set up at the arc and take threes, but the game plan tonight for him should be to attack the Warriors in the paint early and often. He’s scored 16 or more points in 3 of his last 4 battles and he should be looking at 13-16 shots tonight. The Warriors don’t have a lot of size in their frontcourt and Vucevic should have a couple of inches on whoever is guarding him. He’s also pulled down over 11 rebounds per game this season and even though he hasn’t grabbed as many boards in a few games recently, tonight presents a good double-double opportunity for Vucevic. He should be looking at 35 minutes of action tonight and if the Bulls try to completely suffocate Curry on the perimeter, Vucevic should see higher-percentage shots in the post and at the arc.

The Bulls are a bottom-six team at covering forwards and Wiggins hit the 20-point mark in scoring in 4 of his last 6 battles. He even grabbed multiple steals in four games during that span. Wiggins is swiping 1.4 balls per contest. He’s coming off a poor shooting outing but has hit at least 50 percent of his shots in 4 of his last 6 battles. He’s shooting nearly 50 percent from the field this season and he’ll take a little more than half of his shots from the outside and he’s shooting 43 percent from beyond the arc. He’ll help clean the glass as well and he’s grabbing at least five boards per game. If he’s not hitting his shots, the Warriors will take the ball out of his hands, but he is in control of his own destiny because Jordan Poole is waiting in the wings to get more minutes and shots.  Wiggins is the second-leading scorer on the Warriors behind Curry.

The Bulls border the bottom 10 in the league at defending bigger forwards and Patrick Williams will have a tough time muscling down Green in the post. Green isn’t known for his scoring, but he’s hit double figures in three straight games shooting at least seven shots per battle. We can rely on Green to produce boards, assists, and steals. He stole the ball in three of his last four games. He’s blocked five shots total in his last three contests. Green has done an excellent job setting up his teammates and is dishing seven or more assists per game for the third straight season. We continue to see him play into the 30s and tonight with the pace of play expected to be fast in this game, Green should be very beneficial, especially in transition. Green hasn’t logged fewer than 31 minutes in 6 straight contests. He’s dropped double-digit dimes in two of his last four outings.

The Bulls rank 26th in the NBA at defending shooting guards and Thompson has scored more than his 17 points per game average in 6 of his last 7 contests. Thompson hit 50 percent of his shots in 4 of his last 6 outings. He’ll mainly hang around the arc waiting to be fed as a bailout shooter, but we have seen him drive the lane a bit more. Thompson shooting over 39 percent from downtown, and he’s struggled shooting the basketball from inside the arc this season, but he’s caught fire for the most part in recent games. He logged three multi-steal games in his last five and pulled down six or more boards in two of those contests. Even though his minutes were being monitored for a while to start the season, he’s been logging frequent 30-plus minute games a lot more in the last month. Expect Thompson to shoot 13-16 shots this evening.

The Bulls will need all of the help they can get on the defensive end Caruso is a solid defender and even though he doesn’t start, he should still log 23-25 minutes tonight. Caruso grabs 1.4 steals per game and he’s blocked shots in 2 of his last 3 games. Caruso will attempt to contain Curry for the most part while he’s out there. He’s provided relief on the offensive end recently scoring in double figures in four of his last seven matchups and with the pace-up spot the Bulls are in, there will be a lot of transition offense and Caruso could see open looks as a bailout shooter if the Warriors are able to collapse the Bulls driver in the lane. Caruso can shoot from the outside and has shot over 38 percent from the floor and shoots 43 percent from the field. Ayo Dosunmu will draw the start, but Caruso is the better defender and if the Bulls were smart, they’d give Caruso the edge in minutes this evening.

Nikola Vucevic hasn’t been the best defender and we should see Looney play around 25 minutes tonight. He’s scored nine or more points in three of his last four battles and he pulls down around seven rebounds per game. James Wiseman is still with the Warriors G-league team and JaMychal Green is used sparingly. Looney also logged steals in two of his last four contests and dished four assists in two games during that span. We just saw Looney produce a double-double against the Jazz a couple of games ago and he’s logged 20 DraftKings points in 3 of his last 4 battles. In a faster-paced game, Looney will try to outrun the Bulls big men to the other end of the floor to be fed especially on transition. Looney continues to draw starts and if this game was expected to run at a slower tempo, he’d be too risky to start.