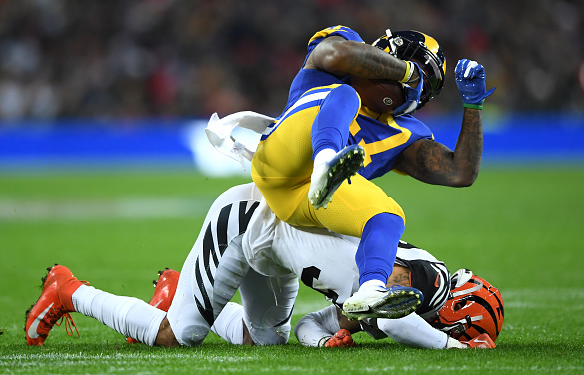 It seems there is always something to talk about when it comes to the Cardinals backfield. As you’re probably aware the Cards traded for Kenyan Drake this week. Injuries to Chase Edmonds and David Johnson may provide him with the chance at getting the majority of carries in Week 9, and maybe even for the next week or so. Edmonds could miss multiple weeks due to a hamstring injury and Johnson seems to be a weekly game time decision. That leaves the Cardinals with Drake, Alfred Morris and Zach Zenner . Zenner played 39 percent of the Cardinals’ offensive snaps last week but had just one carry for zero yards and one catch for 13 yards. The Cardinals ran the ball on just 22.45 percent of their offensive plays last week. That low rate could be attributed to the fact that they were getting blown out by the Saints, but at their core, they’re a pass first team. Drake and any other Cardinals RB is going to have a hard time running against the 49ers this week. They’ve given up the second fewest fantasy points per game to RBs this season and unfortunately the Cards get to face them again in Week 11. Week 10 against the Bucs won’t be easy either since they’ve given up the third fewest fantasy points per game to RBs.

It’s kind of weird that it happened in a game in which the Bears passed the ball 49.35-percent of the time, but David Montgomery enjoyed his first true break out game. He took his 27 carries and turned them into 135 rushing yards (5.00 ypc) and he caught four of his five targets for 12 yards. Bears RBs have a tough matchup against the Eagles this week, but with QB Mitch Trubisky struggling, look for Montgomery to continue to develop into the focal part of Chicago’s offense.

With Kerryon Johnson placed on the IR last week many speculated that Ty Johnson was likely to handle the majority of the Lions’ early down work out of their backfield. J.D. McKissic was expected to handle the pass catching downs. Who knew that Tra Carson would get the start, and record the most carries (12) for the Lions against the Giants in Week 8? Ty Johnson only had seven carries and caught just one of his four passing targets. McKissic had one carry for minus one yard and caught all three of his pass targets for… two yards. The Lions even tried to turn their Week 8 matchup versus the Giants into a Paul Perkins revenge game, but all he could do was carry the ball three times for four yards. In short, Lions head coach Matt Patricia seems to hate fantasy football players just as much as his old boss. Stay away from this backfield until we get a better sense of how Patricia wants to distribute the work among his RBs for the long term.

The Dolphins’ trade of Kenyan Drake has set Mark Walton free. Walton played 87% of Miami’s offensive snaps. He’s likely already owned in deeper leagues, but if you play in a shallow league (10 teams or less) he may still be on the waiver wire. Now don’t delude yourself into thinking that he’s going to win you a fantasy championship. He’s a nice back who not only can grind it out on the ground, but Walton can catch passes out of the backfield as well. However, you already know that the Dolphins are a bad team and they’ll likely continue to play from behind for the rest of the season. That means they probably won’t be running the ball a whole lot. Heading into Week 9, the Dolphins have run the ball just 33.5 percent of the time. That’s the third lowest rate in football. They’ve been a little more competitive over the past two weeks so maybe there’s a slight glimmer of hope that Miami might run the ball a bit more if that trend continues. You do have to love Walton’s Week 15 and 16 matchups against the Giants and Bengals respectively. Both have been very friendly to RBs and what better time to face them than during the fantasy football playoffs? Walton is definitely worth a roster spot but, whether or not you start him should be based on his weekly matchup and your individual fantasy team’s need.

So how are things going for Le’Veon Bell these days? He had joked that $60 million wasn’t enough money to come run with the Jets. He eventually had to swallow his pride and sign a four year $52.5 million deal with Gang Green. He later found out that head coach Adam Gase never wanted the Jets to sign him. Gase had enough clout within the organization to cause the GM who signed Bell to be fired. Gase has no use for Bell even to this day. The fact that Bell’s name came up in trade rumors this week proves that Gase still has a lot of influence within the Jets organization. To his credit, Bell has taken the high road and been a good citizen, urging Jets fans to be patient. It also helps that he’s making $14.5 million this season, but Bell has sadly been wasting his prime over the past two years. Look for him to take out his frustrations against the Dolphins this week. They’ve given up the third most fantasy points per game to RBs this season.