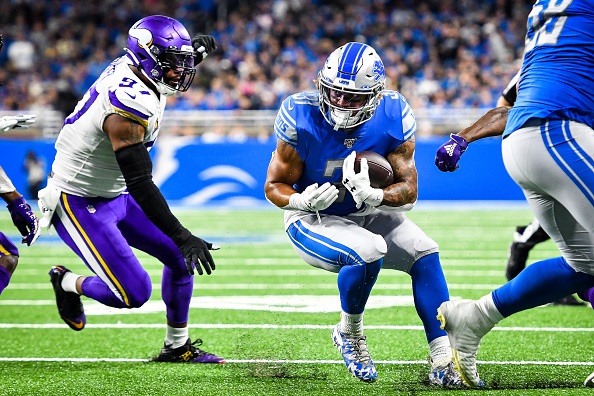 Don’t beat yourself up if you started David Johnson last week against the Giants. He was active to start the game, and you did invest a first or second round pick in your preseason fantasy football draft. He started but unfortunately he was forced to the sidelines after just a few snaps due to a cranky back and sore ankle. Chase Edmonds was one of the hottest names targeted on the waiver wire this week. He ended up as the highest scoring RB in PPR fantasy football leaguesin Week 7 with 126 rushing yards, three TDs and two receptions for 24 yards. With the Cardinals adding depth to their backfield by signing Alfred Morris and Zach Zenner this week, it’s looking like Johnson may not play against the Saints in Week 8. Follow Johnson’s progress carefully leading up to game time and have a backup plan ready. If you’re lucky enough to own shares of Edmonds, by all means start him. The Saints have given up 43 receptions to RBs, the sixth most in football.

Kerryon Johnson suffered his second knee injury in as many seasons, forcing him to the IR. The earliest he’ll be able to return is Week 16. Ty Johnson was yet another RB who was highly sought after off of league waiver wires this week. He’s likely to get much of the Lions’ early down work out of their backfield. At 5-10, 210 lbs some feel that Ty Johnson lacks the size to be a bell cow back for the long haul, but he’s obviously talented as he did post a 7.6 college career ypc.With Johnson not really looked upon as a three down back look for J.D. McKissic ’s role as a third down pass catching option to increase. If you missed out on Ty Johnson in your league’s waiver wire run and you play in a PPR league and McKissic is still available, grab him!

Raiders RB Josh Jacobs is dealing with a shoulder injury that has kept him out of a mid-week practice. It’s thought he hurt the shoulder early in Week 7’s contest against the Packers but head coach Jon Gruden said that he “got it shot up” and that helped Jacobs stay in the game. Gruden called Jacobs’ shoulder injury “legitimate”.  DeAndre Washington and Jalen Richard played virtually the same percentage of the Raiders’ offensive snaps (21% to 23%) but Washington carried the ball six times for a 4.83 average ypc, and Allen carried the ball twice for two yards. Should Jacobs be forced to miss his Week 8 matchup against the Texans you might see Washington get the majority of the early down work while Richard plays the change of pace and passing down role. Both backs are capable of catching balls out of the backfield, and they play the Texans this week who have given up the most receptions to RBs this season (54). Unfortunately for the Raiders the Texans have also allowed an average of under 85 rushing yards per game, third fewest in the NFL.

Adrian Peterson is suffering from what some speculate is a high ankle sprain. He has claimed that he would play tonight against the Vikings but in case he is ruled out or if he aggravates his injured ankle, look for Wendell Smallwood to get the majority of the Redskins’ carries. Chris Thompson has already been ruled out and Smallwood would be the last man standing. It’s not a very favorable matchup for any Redskins RB as they take on the stout Vikings run defense this week and will be likely playing from behind in this matchup.