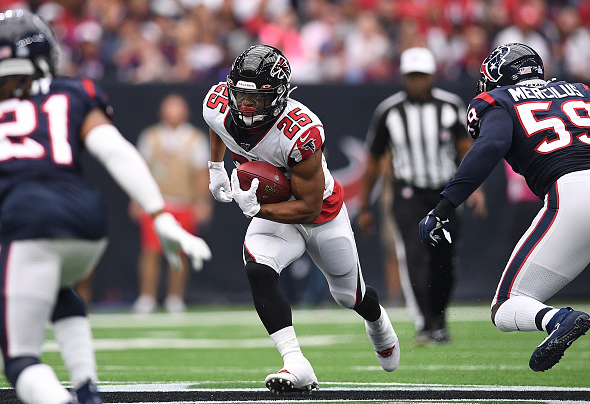 David Johnson owners need to watch his progress as game time approaches as he battles a back issue that he played through in Week 5. Johnson’s back “locked up” throughout his matchup against the Bengals this past Sunday. Backup Chase Edmonds , is a must own for Johnson owners, as head coach Kliff Kingsbury is calling Johnson a game-time decision. Edmonds tied his career high with eight carries this past Sunday, and rushed for a career-high 68 yards. He scored a TD as well. The Cardinals’ “Air Raid” offense has them throwing the ball a bunch but Johnson did have 17 carries last week. Also, their opponent, the Falcons, are well known for being susceptible to pass catching RBs.

Speaking of the Falcons, they are executing the lowest percentage of run plays of any team this season. Part of the reason could be that with a 1-4 won/loss record they’ve been playing from behind for a big chunk of the season. Another reason could be the poor play of their lead back Devonta Freeman . Freeman has just 187 rushing yards and a 3.22 YPC average on the season. We’ve already started to see backup Ito Smith ’s playing time increase. Last week Smith played 47% of the Falcons’ offensive snaps. In Week 4 he played 38% of the Falcons’ offensive snaps, and that was after he played just 5% in Week 3.

Christian McCaffrey is also dealing with a back issue this week. Seems like he’s not in danger of missing time, but based on last week’s box score, Reggie Bonnafon is McCaffrey’s handcuff.

Melvin Gordon played 32 offensive snaps for the Chargers, compared to Austin Ekeler ’s 46 in Week 5. Ekeler caught 15 passes for 86 yards in Week 5 and he’s likely to still have a significant role in the Chargers offense even as Gordon’s playing time continues to increase.

Many Todd Gurley owners have been worried that his arthritic knee would cause him to miss time, but right now it’s a quad injury that might cause him to have to sit out Week 6. In reviewing his production through the first five games of the season the chart below shows that the Rams are obviously limiting his workload this season. Generally, when he’s been on the field he’s been productive.

One thing to note is that his 2019 4.1 YPC is bolstered by a Week 1 6.93 average. In his last four games he has a 3.46 YPC. He is currently RB15 in PPR fantasy football. Gurley owners should watch this situation closely as game time approaches. If he can’t go, Malcolm Brown will be the Rams’ lead back this week. Head coach Sean McVay did hint that rookie Darrell Henderson might also be in the mix this week should Gurley be inactive.

With Saquon Barkley and Wayne Gallman officially ruled out for the Giants’ Week 6 matchup against the Patriots, Jonathan Hilliman was initially expected to get the majority of carries for the G-Men Thursday night. However, some speculate that FB Elijhaa Penny may cut into Hilliman’s workload. Nonetheless, both players will be put in the unenviable position of trying to run against a Patriots defense that has yet to yield a TD to a RB this season. Game script calls for the Giants to be playing from behind and passing the ball a bunch, so don’t expect Hilliman or Penny to get a ton of carries this week.

Jaylen Samuels ’ knee injury will keep him sidelined for about a month and that should put the Steelers use of the wildcat to rest for a while. James Conner will have the backfield mostly all to himself this week against the Chargers against whom he scored two TDs last season. Rookie Benny Snell has played some special teams this season, but he’s only had six carries thus far.  His role will likely increase, and he will act as Conner’s handcuff during Samuels’ absence. Trey Edmunds is also expected to be promoted from the practice squad.

Matt Breida , Tevin Coleman , and Raheem Mostert basically played an even percentage of the 49ers offensive snaps in Week 5. They all were productive too, as the trio combined for 245 rushing yards on 34 carries. That’s a 7.20 YPC average. FB Kyle Juszczyk , and his premier blocking skills, is credited with being a major factor in helping the 49ers to average 200 rushing yards per game. Unfortunately he’s expected to miss four to six weeks due to a sprained MCL. He’s one player, but the 49ers will miss him and it will be interesting to note how his absence will affect the 49ers run game.