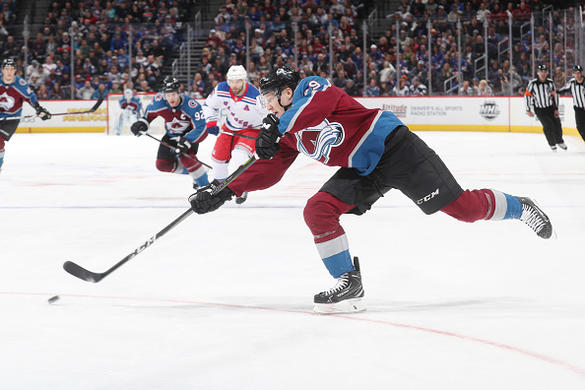 It is a shame that MacKinnon went down recently, since he was challenging for the NHL scoring lead at the time. MacKinnon's injury, reportedly a shoulder issue, is expected to keep him out 2-4 weeks. Rookie center Alexander Kerfoot might be the prime beneficiary of MacKinnon's absence, provided he continues to play between captain Gabriel Landeskog and right-winger Mikko Rantanen on Colorado's top line. Kerfoot is worth a pickup.

The 22-year-old Russian winger suffered a concussion against the Toronto Maple Leafs last week and has already missed New York's next two games. At this point, Buchnevich could be out for a prolonged stretch of games. It is too bad, since he was well on his way to his breakthrough season in the NHL (50 GP, 13-19-32). Rookie winger Vinni Lettieri was called up once again to help curb the loss of a few Rangers forwards.

There is something bizarre going on with regards to Ryan and hand injuries. The veteran winger seems to suffer a new hand injury every week! His latest issue occurred against his old team (Anaheim) last week and could keep him out for a significant period of time. The 30-year-old winger is enduring one of his worst NHL campaigns for a team going nowhere quickly in the Senators. At this point, Ottawa may shut Ryan down for the season. 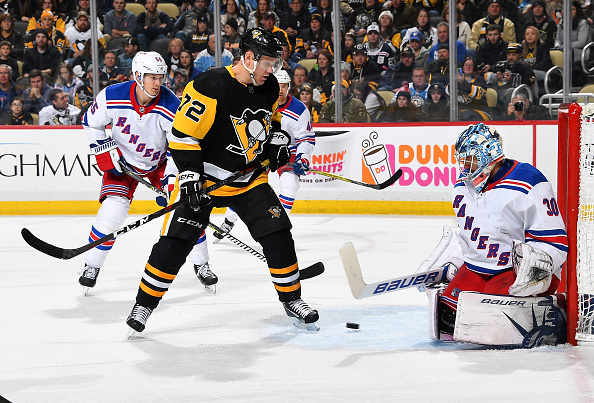 The in-your-face, front-of-the-net nuisance on Pittsburgh's top-ranked power play could miss more than a week due to an injury suffered against Washington last week. Hornqvist, 31, has been replaced in the lineup by rookie Zachary Aston-Reese. However, it is Jake Guentzel who will now man the front of the net whenever Pittsburgh has the man advantage. This could be a golden opportunity for Guentzel to snap out of his scoring slump.

The Flyers are welcoming veteran Elliott back in the lineup this week, after the 32-year-old puck-stopper missed Philadelphia's last four games due to his lower-body ailment. Perhaps not coincidentally, the Flyers went 0-3-1 during Elliot's absence. Michal Neuvirth has struggled to pick up the slack lately, while third stringer Alex Lyon did not fare well in his first taste of the NHL. Elliott fantasy owners should feel confident moving forward.

Like teammate Hornqvist, Sheary is going to miss time due to a lower-body ailment. While Sheary was not seeing much action on the Penguins' vaunted power play, he had been playing with captain Sidney Crosby lately. That job now belongs to Bryan Rust, whose recent offensive outburst was mostly done from the fourth line. Now promoted, can Rust prove (once and for all) that he is a legitimate, top-six winger in the NHL?

Another player dealing with a concussion lately, Gagner's absence hurts both himself and the Canucks franchise. That's because the slick playmaker was a potential trade target of several contending teams looking for center help. Now, this injury complicates matters. The Canucks will probably hold onto Gagner at this point. The likes of Brendan Gaunce, Nic Dowd and Markus Granlund should see more ice time with Gagner out.

Like teammate Pavel Buchnevich, Vesey is currently dealing with his own concussion issue. He missed his first game against Dallas on Monday and might miss several more games. It has been a rough sophomore campaign for the 24-year-old Vesey, as he continues to fight the inconsistency tag. The Rangers, who are fading from the playoff picture in the Eastern Conference, may become sellers prior to the February 26 trade deadline. 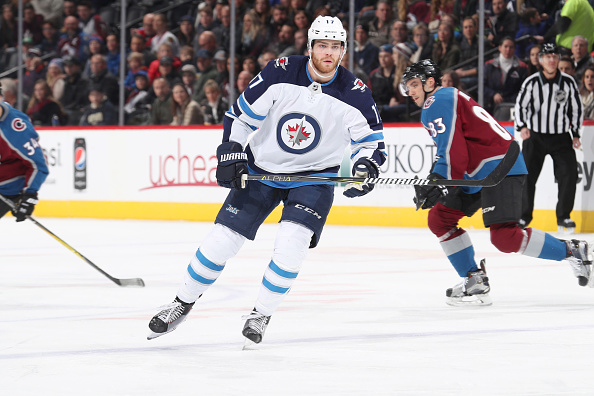 Lowry just returned to action last week after missing eight games because of his upper-body injury (which seems to have resurfaced). He has now been placed back on Injured Reserve. With the 24-year-old center out of the lineup once again, Andrew Copp will once again move from left wing to center on the third line during Lowry's absence. The good news for Winnipeg is that No. 1 center Mark Scheifele could be back relatively soon.

A preseason Calder trophy candidate, Bjork began 2017-18 on Boston's No. 1 line alongside Patrice Bergeron and Brad Marchand. However, he failed to cement that role, was injured in mid-November, was demoted to the AHL in early January and has spent a few games in the press box as a healthy scratch. Now he is injured again. The 21-year-old winger might not be much of a fantasy factor this season but remember him for next year. 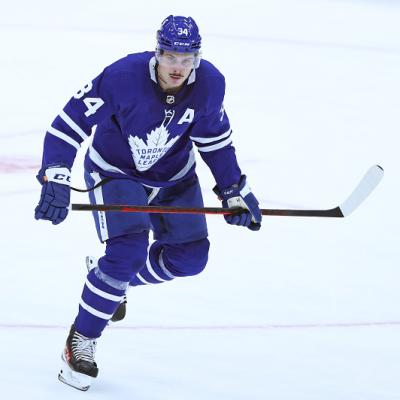 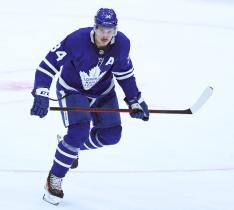 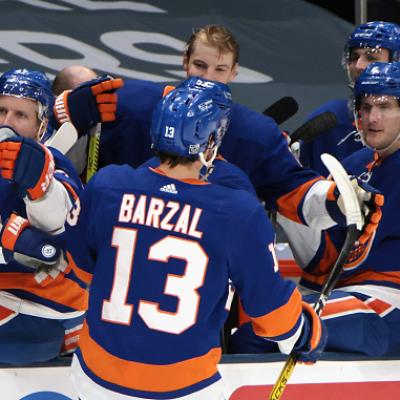 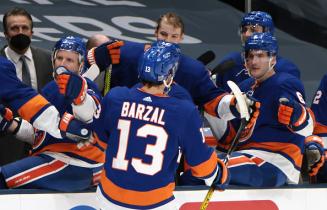 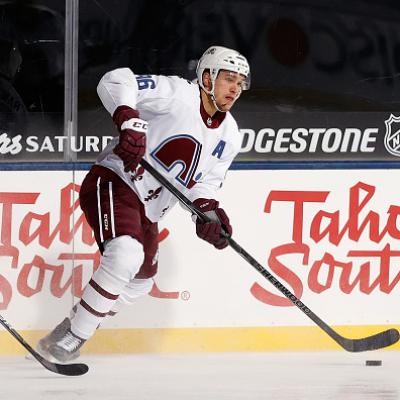 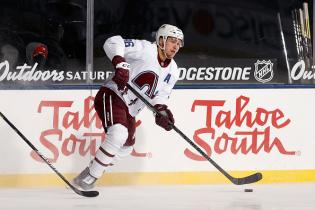 NHL Jaroslav Halak gets the nod on Friday vs. Capitals

NHL Seabrook won't be able to play in the NHL again

NHL Filip Forsberg scores 1G, 2A in loss to FLA on Thu

P. Grubauer - G
COL
Philipp Grubauer will start Friday against Anaheim.
Grubauer is coming off a 26-save shutout win over San Jose on Wednesday. He has three shutouts this season to go along with a record of 11-6-0, a 2.07 goals-against average and .920 save percentage.
Added 1:38 pm (EST)
Added 1:38 pm (EST)

M. Calvert - F
COL
Matt Calvert (upper body) was sporting a non-contact jersey during the morning skate on Friday.
Calvert won't play against Anaheim, but he is getting closer to being available to return. He has been sidelined since Feb. 24 due to an upper-body injury.
Added 1:36 pm (EST)
Added 1:36 pm (EST)

N. MacKinnon - F
COL
Nathan MacKinnon will be good to go for Friday's match against Anaheim.
MacKinnon was on the ice for the morning skate and he worked on the top power-play unit. He is slated to play between Gabriel Landeskog and Mikko Rantanen. MacKinnon was unable to finish Wednesday's match against San Jose following a high hit from Joachim Blichfeld, who received a two-game suspension on Thursday. However, the Avalanche were optimistic that MacKinnon would be OK and fortunately that turned out to be true. He has five goals and 22 points in 19 matches this season.
Added 1:29 pm (EST)
Added 1:29 pm (EST)

B. Byram - D
COL
Bowen Byram (upper body) won't play on Friday, but he is close to a return to the lineup.
Byram didn't take part in the morning skate, but he reportedly skated beforehand. The 19-year-old blueliner hasn't played since Feb. 27 due to an upper-body injury.
Added 1:26 pm (EST)
Added 1:26 pm (EST)

C. Makar - D
COL
Cale Makar (upper body) won't be in the lineup on Friday night against Anaheim.
Makar is progressing even though he wasn't on the ice for the morning skate. Still, coach Jared Bednar isn't sure when the Avalanche blueliner will be available to return from an upper-body injury.
Added 1:12 pm (EST)
Added 1:12 pm (EST)

G. Landeskog - F
COL
Gabriel Landeskog is expected to be in the lineup on Friday night despite skipping the morning skate.
Landeskog’s wife, Melissa, gave birth to a baby boy yesterday. He is slated to play alongside Nathan MacKinnon and Mikko Rantanen on the top line versus Anaheim. The Avalanche captain has six goals and 14 points in 16 games this year.
Added 1:08 pm (EST)
Added 1:08 pm (EST)

M. Subban - G
CHI
Malcolm Subban will be in the crease on Friday night against Tampa Bay.
Subban is coming off a 5-3 loss to Detroit on Saturday when he stopped 27 shots. The defeat ended his three-game win streak. Subban has a 3-2-1 record this season with a 2.60 goals-against average and .916 save percentage.
Added 12:39 pm (EST)
Added 12:39 pm (EST)

M. Subban - G
CHI
Vitek Vanecek will be in goal for Friday's game against Boston.
Vanecek will get a second straight start even though the Capitals have Ilya Samsonov back on the roster. It's possible he's being rewarded for a 2-1 shootout win over the Bruins on Wednesday when he stopped 18 shots. However, it also can be argued that he gained plenty of trust from the team during Samsonov's absence. In any case, Vanecek has a 10-4-3 record this season with a 2.69 goals-against average and .910 save percentage.
Added 12:29 pm (EST)
Added 12:29 pm (EST)