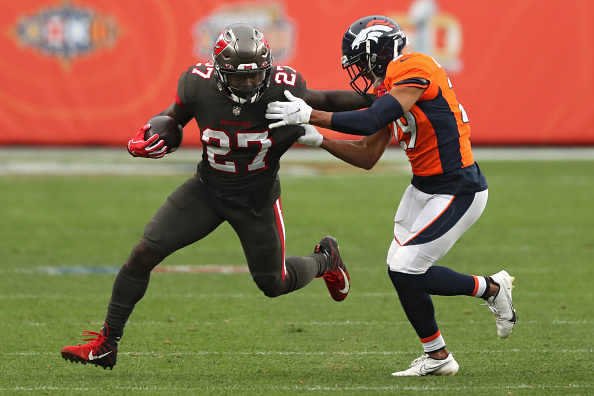 This is still Kenyan Drake s backfield as evidenced by the overall touches he is seeing. My one issue with Drake this season is the lack of touchdowns. While it was great to see three red zone carries this season we have also seen Kyler Murray more willing to run the football when in goal to go situations and that is limiting the upside.

Brian Hill was a hot waiver pick up this week after he saw a nice uptick in snap percentage this week. That said, this backfield is still Gurley's to lose so Hill is nothing more than a handcuff. If you own Ito Smith , feel free to drop.

I may hate this backfield more than New England. The Ravens offense really struggled against the Chiefs but Baltimore doesn't allow for any of these guys to get their footing given the rotation. It's clear that Dobbins is the pass catching back but Ingram can't even be a flex play at this point given his carry numbers.

With Zack Moss still on the shelf it was clear that Singletary was going to carry the load in Week 3. Moss is back for Week 4 so we should expect the snap counts to drop in Week 4 but Singletary is still a flex play for me in most formats. Lack of touchdown upside is also an issue with this backfield as Josh Allen will run it in when the Bills are in goal-to-go situations.

Is Mike Davis any worse than Christian McCaffery? The scoring stats would suggest no, as he found the end zone twice in Week 3 and added eight catches on nine targets. Now, of course CMC is an elite back but this offense seems to be willing to use Davis in that role and through two weeks he has been up to the task.

Tarik Cohen tore his ACL in this one so while he saw 32% of the snap share in Week 3 we are expecting Montgomery to take over a much bigger role in Week 4 and maybe he finally becomes more involved in the teams passing attack. Coming out of college many in fantasy were excited about the prospects of David Montgomery being a three-down back but Cohen's presence limited that upside. Week 4 will be something to watch.

Mixon continues to dominate the snap share but the production has not been there. If you are a Mixon owner however lets not jump ship just yet as the Bengals have a very nice match up this week against the Jacksonville Jaguars.

Another strong week from this running back duo. After a disappointing Week 1, Nick Chubb has had back-to-back strong weeks and Week 4 could be even bigger with news that Hunt is dealing with a groin injury that has kept him from practice. If Hunt is out you can expect to see Chubb more involved in the teams passing attack this week against the Cowboys.

Unless there is an injury, this will always be Elliott's backfield. Nothing more needs to be said here.

Lindsay has yet to return for Denver who played on Thursday night for Week 4. Gordon should continue to be the lead back here until Lindsay returns where I expect a bit more of a timeshare to ensue.

Throwing my hands up with this backfield here. In Week 1 and Week 3 we saw Adrian Peterson lead the charge. In Week 2 we saw Kerryon Johnson split the snaps and who knows what is happening with rookie D'Andre Swift? I think AP is still the safest back to own but this team should figure out the usage better soon I hope.

I can appreciate that the Packers use all three backs here but this is still Aaron Jones backfield and that will not be changing any time soon. If you drafted rookie AJ Dillon this season you can safely let him hit the waiver wire because it seems like he is out until an injury opens up a spot.

Even when Duke Johnson returns we should still see David Johnson with north of 90-percent of the offensive snaps. After a struggle to begin the season we finally get to the soft part of the Texans schedule where I expect DJ to put up some bigger games.

Week 3 was a blowout so not shocked to see some of these numbers. The Colts defense has two touchdowns also which took away some of the team's potential offensive snaps. This is still Jonathan Taylor's backfield. Those who own Nyheim Hines should be happy to see his five targets after the Week 2 misery.

The rookie is wild'n'out right now for Jacksonville. Sure the yards per touch stats may not be great but his volume is fantastic and he is seeing the red zone work. Those who gave up on Chris Thompson after Week 1 may need to see if he is still out there as his six targets is something to watch moving forward.

No real competition here. CEH is the guy and his involvement in the passing attack has increased in each of the last two weeks. We may not see him run for 100+ yards like we did in Week 1 but games with 100 total yards is defenitely in play for the first round pick as part of this explosive KC offense.

If you drafted Austin Ekeler you need to pray that Anthony Lynn does not go back to TyRod Taylor at the QB position. Justin Herbert is great for not only his fantasy value but the overall fantasy value of this Chargers offense. The 11 targets this week puts Ekeler back in the conversation as one of the leagues top fantasy backs in PPR formats. I'm not out on Joshua Kelley, may have been a down week but he still got red zone touches which will help his value.

Cam Akers is still out with his rib injury and Henderson is running wild right now. After Brown had a big Week 1 the last two have gone to Henderson an another great match up awaits as the Rams face the Giants this week.

Tough week for Jacobs against the Patriots but this is still his backfield with no real threat from anyone. He continues to see usage in the passing game as well which helps his fantasy floor on weeks that he does not find the end zone.

Still shocked nobody told us that Gaskin was going to be the lead back out of camp yet through three weeks he is the clear leader. What sticks out most to me was his nine red zone touches. If that is how it's going to be then Jordan Howard may find himself out of a job soon.

I projected the Cook breakout game against the bad Titans defense and he crushed it. He has another soft match up in Week 4 against the Texans and I expect him to run wild.

Good luck figuring this one out. Burkhead had the big day and Michel ran for over 100 yards but James White is back in Week 4 and Damien Harris is soon to follow. Can't trust anyone here.

Kamara is playing in video game mode right now, though Mike Thomas expected to return in Week 4, a healthy Kamara should still be the all-around back we have seen through three weeks with little production drop off.

Freeman is certainly going to take over this backfield at some point and though the Giants have another tough opponent this week, it does get much much easier moving forward.

Frank Gore is still the guy but you want nothing to do with this offense. The offensive line is beat up. This team is not scoring the football. No value here unless you are in a 14-team league or deeper.

Yep, in Week 2, Sanders was the guy and in Week 3 it was no different. Sure, the Eagles are not good but at least he is on the field and hey, how about those eight targets!

When healthy this backfield is clearly Conner's. He posted back-to-back 100-yard games and even saw five targets in the passing game. Outside of Conner owners holding onto Snell, there is no reason for the other RB's here to be rostered.

Carson looked like he could be missing some action following his knee injury but reports are he will be good to go in Week 4. This kills the upside for Hyde and Homer who looked to benefit from the injury. Until then you can trust Carson to see the marjority of the touches here.

McKinnon lead the backfield and both he and Wilson found the end zone. With Raheem Mostert s return coming soon, the value here will be limited for these two with McKinnon holding most of that as the change of pace option.

Bruce Arians keeps telling us that this is Jones backfield and that seems to be the case as he outsnapped Fournette in Week 3 and now in Week 4 it turns out that Fournette will be out due to injury. Expect that snap share for Jones to go up.

When the Titans play football the football goes to Derrick Henry . Enough said.

Confusing backfield here to analyze. J.D. McKissic actually got carries, the targets were split and Peyton Barber is being phased out which I am fine with. Hopefully Washington just decides to let Gibson be the man.