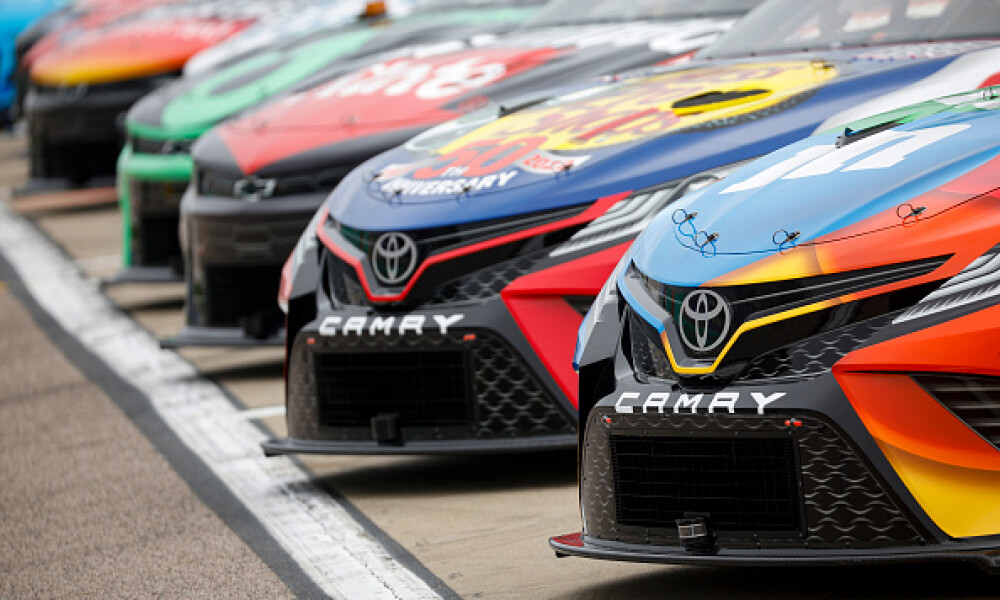 The Hollywood Casino 400 gets going Sunday afternoon at Kansas Speedway with all spots in the Round of 12 up for grabs. The NASCAR playoffs are in full swing as we kick off Week 1 of the NFL season. With all the fast-paced action on the football field, NASCAR can top that with the speeds and action at Kansas.

While layout of Kansas Speedway might be considered a standard intermediate track, it’s anything but. With multiple grooves of racing lines, tire wear a factor, and passing galore, it’s not a standard mile-and-a-half at all. Back in the Spring race here, we saw a lot of passing and drivers could pass for the lead under green as well. Expect more of the same on Sunday. One quick note to pay attention to is a slight change in the tires from the May race. This weekend the left side tires are the same as they were at Pocono while the right side tires are the same as they were in Kansas 1. That might make a difference it might not but they were going for tires that could take higher speeds at shallower banking than they had here in May. Long run speed will be important for the race so pay attention to the drivers who had the most long-run speed at practice on Saturday, even though it was cooler conditions.

Last week we said Busch was a gut feel play and it worked out. He led 154 laps before his engine blew and had it not, he likely still wouldn’t be being run down. The 18-car is just about as fast this weekend even though the starting spot doesn’t reflect that. He’ll be popular with the PD upside, coming off of last week’s dominate showing, and for the news that broke on Saturday with him likely moving to RCR for 2023.

Larson has averaged the best driver rating in the last four races here, the best average finish, and has a whopping total of average DK points in that span as well. In fact, he leads the field in that category too — by 27 points. Larson finished P2 here in May, the only Chevy in the top-six, and won this race a year ago. He’ll be looking to clinch a spot in the Round of 12 with another similar run this weekend. He was also very speedy at practice with top-three speed in the short- and long-run metrics before qualifying P7.

It was a very disappointing weekend in Darlington for Truex. He had a very fast 19-car and then the engine blew. Now, he gets to come back to a track he’s done very well at in the past including in May and try and have as good of a run on Sunday. He’ll be starting P12 and ran top-five in practice which gives him nice PD upside. There is a chance that people won’t want to double-dip on him after last weekend but that’s just better news for us.

He might be the most popular pole-sitter of the year, at least for an intermediate race. He was the fastest in single-lap, 5-lap, 10-lap, 15-lap, and 20-lap averages before qualifying on the pole. In May, while the finish doesn’t look great, he brushed the wall late while running in fourth. He’s been speedy at intermediates all year and Sunday shouldn’t be any different given the car setup he’s got.

Bell spent his time at practice dialing in the feel of the car and didn’t get longer runs in. However, there is still speed in the car with a P4 starting spot and having posted eight top-10s at similar tracks this year. In GPPs Bell might be a great pivot off of Reddick if you don’t want to play with the pole-sitter chalk as he should be just about as fast a Reddick, just won’t lead as many laps.

Before last week’s race I eluded to a statement he made that basically he wasn’t the HMS test car any more. Guess what? He had speed in spades at Darlington. The same should be true again this weekend. While the speed wasn’t great at practice, he did lock down a P9 starting spot. The warmer temps on Sunday should help Byron’s speed as well so expect him to be a threat late for the win here.

It’s like we’re gluttons for punishment here. The problem with giving up now though is that he has speed again and a tasty starting spot. He’ll roll off P17 with top-seven speed. The only thing we need now is for the speed to show up and stick throughout the race. A clean race will do him wonders and just a clean race will give him an easy shot to hit value with a top-10 finish.

Harvick was on his way to another top-10 at Darlington before catching fire. Now, he’s angry Harvick and that’s good for us. Angry Harvick typically has a lot of speed and that showed practice. Lets set aside that over the last four races here he has the second-best average finish in the field, second best driver rating, and the second-most DK points. He’s starting P14 with top-10 practice speed, that should be enough for us already let alone the mid-tier price.

Bowman nearly made my Pickswise Cup betting piece at +3500. That’s how much I like Bowman this week and that was before he went out and qualified P3 and showed top-five speed at practice. He’s run well here in the last handful of races and has five top-10s at similar tracks this year. He should be able to get out and lead some laps and finish in the top-five on Sunday if not challenge for the win late.

Wallace was fast here in May. He passed 60 top-15 cars under green flag racing in just 267 laps, that’s a lot. Now, though, he’s in the car that won the race in a dominant fashion. He’s been showing a lot of consistent speed over the past four to five races this year regardless of the car number on the side of his ride. Starting P6 after running P4 in practice is encouraging, though the long-run speed wasn’t quite as good as we’d like to have seen. That might keep some people off of him a bit. However, if we learned anything from Darlington, it’s that if he’s starting in the top-10 he can likely hold the spot.

Dillon has posted three top-11 finishes here in the last four races. Now he starts P11 on Sunday. He also posted a top-10 10-lap average in practice. That basically matches what he needs to hit value this weekend. If he finishes P9 he hits, P8 he exceeds 5x and the best part is that he might be overlooked in this range with the names around him that are around him.

Gibbs hasn’t been in the playbook all that often but this week it’s too hard to ignore him. The Toyotas as a whole were very quick here in May with six cars in the top-10. The 23-car that Gibbs was in was actually the fastest car having racked up 60 Quality Passes. He then went out at practice and showed top-five speed in single-lap and long-run speeds before qualifying P16. He could be a popular pay down option to get a fast Toyota into a lineup though so just be aware he won’t be that sneaky.

While Keselowski, his teammate and owner, might be more popular for position differential upside, Buescher has just as much value if he can hang on to his spot or only go back a few spots. The practice speeds where good for Buescher and it wasn’t just because of a sunny spot on the track either. The 17-car has been quick at intermediates this year. If you want to play Keselowski, that works too, Buescher might get yo ua bit more leverage though.

He only ran four laps at practice before his on-track time ended. No it wasn’t due to a wreck, but rather an engine issue that had it running oddly. That kept him from qualifying and gave him a ton of free PD by starting in the back of the pack. He’s been good at intermediate tracks this year with an average finish of 14.8. If he cracks the top-20 that major value, though it comes with the chalk tag of the slate.

Oh Ricky. Couldn’t even keep it clean in practice could you? He had a tire go down and got into the wall pretty good in Turn 4. He’ll start P35, aka the back of the grid, on Sunday but did run pretty well at practice before brushing the wall. If he can keep it clean and move up well like we’ve seen him do this year for four top-10s, or his average 19.0 finish, we’re in for a good points day from him.

There’s a risk here not knowing what the car is capable of over the long-run, but it’s a risk I’ve decided to take. He’s had speed in the Kaulig car this year at intermediates with an average finish of 20.1 in those 10 races. Haley did run P8 in single-lap speed at practice and perhaps he’s a bit overlooked thanks to his lack of long runs. We’ll take I for a GPP build.

We’re going more with what we’ve seen from the Toddfather at comparable tracks this year, rather than on Saturday. The car wasn’t great at practice and didn’t run 10-consecutive laps and then qualified P32. He’s moved up nearly seven spots a race at other intermediates this year starting in this same starting spot on average. Good enough for me for a GPP.

This grid is a bit top-heavy in pricing so we’ll need a bottom feeder or too. Yeley has averaged a finish here that’s nearly 5.5 spots better than where he qualified. That’s it, that’s the play. If he keeps the car clean and moves up a few spots, that’s all we need.