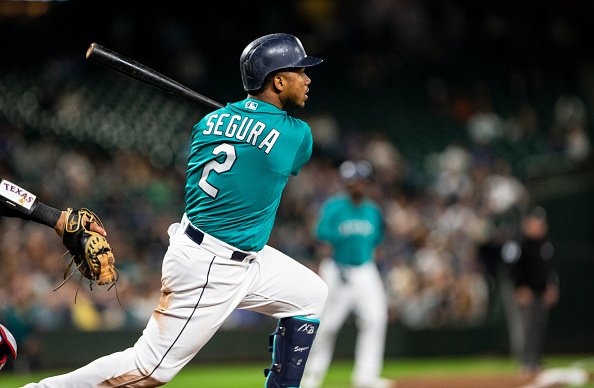 It’s like Jerry DiPoto’s the fantasy owner no one wants in their league. Puts feelers out all the time in texts or emails to see who might be available. Or making two or three player for one deals constantly tinkering with the roster. Not long after the Mets trade finally made the finish line, Seattle will now send Jean Segura , James Pazos and Juan Nicasio to the Phillies for Carlos Santana along with J.P. Crawford . Once again, here’s the fantasy fallout as it impacts each player in the trade.

No offense to Pazos or Nicasio, but Jean Segura will be the headliner in this trade. He’s hit at least three hundred or better in each of the last three years and receives a boost in ballpark effects shifting to Philadelphia. While power does not come to mind, the last time Segura played in a plus hitters park, Arizona’s pre-humidor days in 2016, he hit 20 before only totalling 21 the last two years in Seattle. However, Segura’s fantasy stock rises with this move.

Over the last three years, he owns a .308/.353/.449 slash line with 41 home runs and 75 RBI. With no discernible home and road split statistics to explain it, how will Segura’s home run total potentially rise with the Phillies? Here’s a look at his fly balls and line drives the last three seasons extrapolated over his new home park: 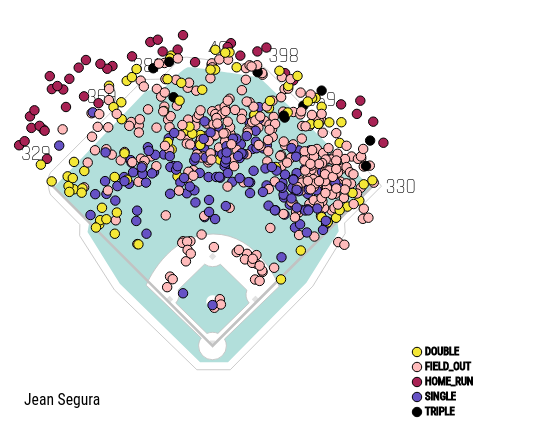 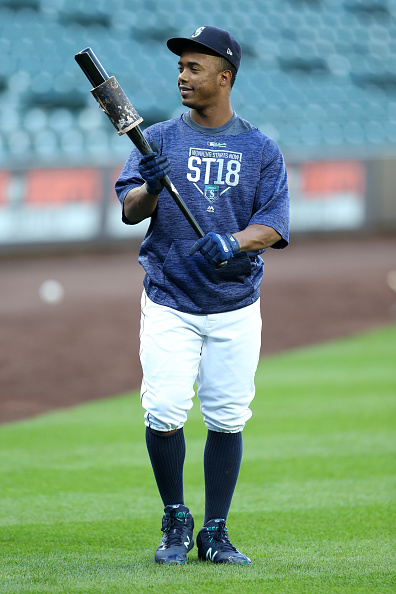 Sprinkle in a couple of the field outs and doubles and Segura could see his home run total migrate towards the mid-teens. Not earth shattering, but intriguing nonetheless. In 2018, Segura hit .304/.341/.415 with 91 runs, 10 home runs, 63 RBI and 20 steals. This coincides with his lowest swinging strike percentage (5.6 percent) of his career and his best contact rate (88.3 percent).

Hitting atop a potentially lineup in a better park should bode well for Segura. While his expected statistics hint at regression, the move to Citizens Bank Park should mitigate them. Prior to the trade, Steamer projected him to score 81 runs with 13 home runs, 64 RBI, 21 stolen bases and a .279/.324/.399 line. Heed his last three year slash lines along with the knowledge he will turn 29 in March. Segura will continue to be a solid choice in fantasy with potential upside in runs and home runs this year. Taking the over on his Steamer in all categories except steals, those feel just right.

With Edwin Díaz turning in one of the best seasons as a closer in 2018, do not overlook the impact Juan Nicasio had upon him. Not only documented in articles, Diaz followed Nicasio around Spring Training prior to his dominant season. On the surface, Nicasio’s numbers cratered last season with his ERA spiking to six and his WHIP to 1.38 in 42 innings.

Nicasio pitched through injuries last year and did undergo a knee procedure in September. Despite his gaudy 26.2 strikeouts minus walks percentage, Nicasio’s BABIP ballooned to .402 and his strand rate fell to only 58.1 percent to inflate his counting statistics. Simple regression to the mean by Nicasio towards his career BABIP yielded to .321 and his strand to 69.6 percent will help his ratios. Keep in mind, Nicasio’s high ERA last season accompanies a 2.99 FIP, he deserved better.

Plus, if healthy, Nicasio’s fastball should bounce back to somewhere in the middle of his 2017 and 2018 seasons. Most importantly, if Nicasio can be a mentor to Diaz, here’s hoping he can do the same thing for Seranthony Dominguez . Trying to predict who closes for the Phillies can be aggravating, but if Dominguez returns to the form when first promoted with added veteran depth, this bullpen becomes very, very good.

As the last part of the Phillies haul in this deal, southpaw James Pazos also joins the bullpen. Pazos went 4-1 with a 45:15 K:BB in 50 innings with a 2.88 ERA, 3.60 FIP and 1.24 WHIP. He finished with a 14.2 strikeouts minus walks percentage and a 9.2 swinging strike rate, both down compared to his numbers in 2017. Pazos used his fastball more and slider less last season with mixed results, but there’s room for improvement. The key will be Pazos getting his slider effectiveness back. In 2017, Pazos generated a 46.5 whiff per swing according to Brooks Baseball but it dropped to 23.8 percent last year along with less usage. If he’s healthy and the slider improves, Pazos will be a steal for the Phillies as a left-handed reliever.

One season proved to be enough for Carlos Santana in Philadelphia. He moves from blocking Rhys Hoskins from first base to blocking Daniel Vogelbach. Santana accrued 560 at-bats last season with 82 runs, 24 home runs, 86 RBI, two stolen bases and a disappointing .229/.352/.414 slash line. But, he finished as one of four qualified hitters to walk more than he struck out in 2018.

While the 34 home runs Santana hit in 2016 appear to be an outlier, he’s still a steady producer in the category. His BABIP collapse to .231 fueled his average to crater but Santana’s isolated power stuck. Over the last three seasons, Santana’s hit a solid but not spectacular .249/.360/.457 with 81 home runs and 252 RBI.

When trying to predict his 2019, it’s open to interpretation. But, Santana’s career 33 percent hard hit rate and 13.6 home run per fly ball percentage seem like strong starting points. Using his expected statistics from last season, Santana deserved a better outcome. His expected home run total of 23.4 aligns directly but not his .261/.384/.463 expected slash line. Perhaps a return to the American League will help his numbers bounce back.

Prior to the trade, Steamer projected Santana to score 77 runs with 24 home runs, 74 RBI, three stolen bases and a .242/.359/.446 line. Hitting in Seattle will benefit him as a left-handed hitter better than as a righty, and here’s his line drives along with fly balls the last three years in his new park: 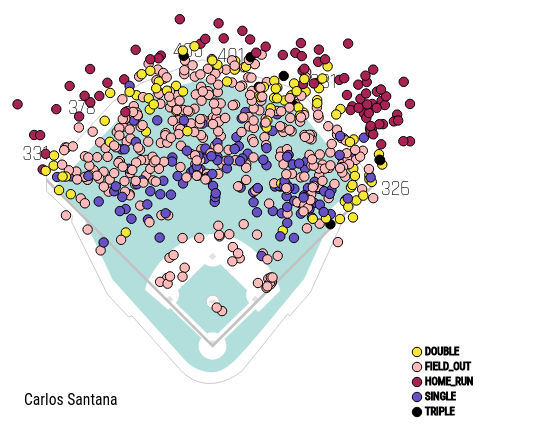 For owners burned by Santana last year, his depressed price in upcoming drafts could make him a worthy late round flier for him reaching his Steamer projection.

In a season cut short by injury, J.P. Crawford disappointed from a fantasy standpoint making only 117 at-bats with 17 runs, three home runs, 12 RBI, two stolen bases and an anemic .217/.319/.393 slash. During his last year at Triple-A, Crawford finished with a 14.2 walk percentage compared to a 17.4 strikeout rate. However, this discipline did not translate in last season’s limited sample with his strikeout percentage spiking to 26.8 percent versus walking 9.4 percent of the time.

If Crawford can become a fantasy asset, he will need to improve upon his plate discipline in the majors. While Crawford’s a better real life player than fantasy, there’s time for him to develop. He should own a clear path to at-bats. Steamer projects him to get 417 at-bats with 48 runs, 11 home runs, 48 RBI, six steals and a .227/.322/.366 line. Not really enough to entice owners in 12-team or shallower leagues. Crawford should only appeal to deep (20 team leagues) or league only formats in 2019. But, keep tabs on his strikeout percentage to see if can improve upon his average going forward.

There’s many layers to any trade. Seattle continues to turn over its roster, so be sure to stay with Fantasy Alarm to stay ahead of your competition.