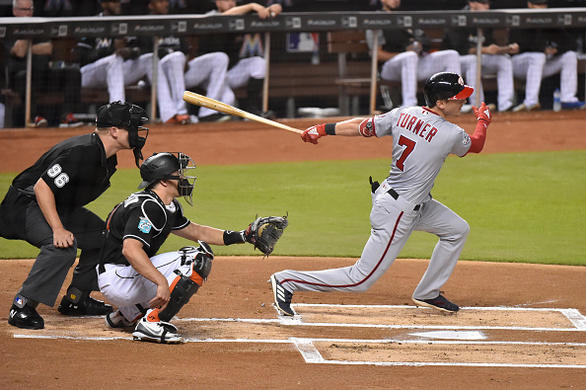 Trea Turner ’s past tweeting leaves much to be desired. For those who drafted him in the first round for steals, this also applies. However, over the last four games, Turner’s swiped two bases in three of them, totaling six and propelling him to the lead in the majors with, 28 stolen bases? With the knowledge of launch angles and home runs being in vogue, steals continue to dwindle as evidenced by the paltry number leading the league.

As disappointing as the 28 stolen bases may be, Turner’s currently pacing towards 100 runs, 20 home runs, 65 RBI and 42 stolen bases if he were to play all 162 games. Most owners would sign up for this prior to the season. Of course, 50 or more steals would be more alluring, but in this new age of baseball, surpassing 40 stolen bases in a season could be enough to increase a player’s fantasy value.

Teammate Bryce Harper went 2-for-4 with a double, scored a run, drove in one and stole his ninth base in a win over the Mets. He’s recorded nine RBI his last seven games and reached safely in 32 of his last 36 contests with 12 doubles, six home runs and 33 walks in them. 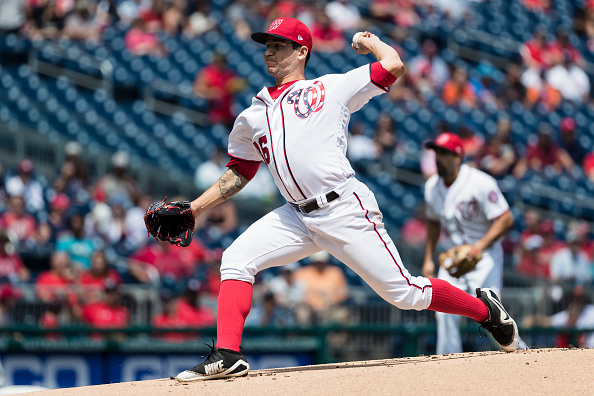 In a matchup Las Vegas favored Tommy Milone facing off with Noah Syndergaard , Milone justified the computers. He limited the Mets to three hits and one earned run in seven innings with nine strikeouts for his first win of the year. Mione recorded 13 swinging strikes and 20 called of his 97 pitches. Syndergaard struggled early allowing three runs in the first three innings then settled down to retire 12 hitters in a row and lasted seven innings as well. Thor only generated eight swinging strikes with 14 called on 91 pitches but seems encouraged to pitch the remainder of the season in the rotation.

If the Yankees finish behind the Red Sox, their play against Baltimore could be a deciding factor. After today’s loss, the Yankees are 6-6 against the Orioles while Boston’s 10-2. Versus all other teams, New York’s 62-32 while Boston’s 65-32. Sonny Gray added to the Yankees misery lasting 2.2 innings and giving up eight hits, seven earned runs and two walks with three strikeouts in the loss. He entered a winner in all three starts against Baltimore this year with an ERA of two.

Lance Lynn was forced into action as a reliever and will lose a chance to start in Boston as a result. Lynn did strikeout five batters in 4.1 innings to keep the game close. Alex Cobb gets only his third win of the year holding the Yankees to seven hits and one earned run with six strikeouts. Trey Mancini went 3-for-5 with his 14th home run and two RBI to pace the Orioles. Gleyber Torres launched two home runs for New York.

Teams needing speed for the stretch run may want to add Billy Hamilton . He’s an imperfect hitter with middling on-base capabilities, but can he run:

Billy Hamilton stole 2nd straight through a pitchout (not the first time this season he's done this).

Hamilton went 2-for-4 with his 23rd stolen base on a pitchout. He also gets the Mets next week, Turner stole four bases in two days against them, and the Cubs later in the month. No player can dent a category right now like Hamilton could.

Strong outing by Carlos Carrasco who fired 7.1 shutout innings giving up four hits and striking out 10. Carrasco produced 17 swinging strikes and 13 called of his 101 pitches before turning over the mound to Brad Hand who worked the last 1.2 innings for his 26th save, and second with Cleveland.

Health could be an issue for Eddie Rosario who finished hitless in four at-bats. He sat out on June 21st with a sore shoulder and his numbers since reek of an injury:

Although Carlos Correa and José Altuve sit on the disabled list along with no George Springer on Wednesday, Houston broke out for eight runs in Seattle. Marwin González homered in each of his first two at-bats. Then both Jake Marisnick and Max Stassi hit their eighth home runs of the year.

It’s been a streaky season for Sean Manaea but he’s hot again. Manaea won his fifth game since the start of June and has a 3.12 ERA in his last 66.1 innings. Fueling this streak? Manaea’s eight walks his last 10 starts.

In a loss, Randal Grichuk keeps on hitting. He doubled twice and has 11 extra-base hits over his last 13 games (eight doubles, three home runs) and batting .294 (15-for-51) in them.

For Seattle to activate Cameron Maybin and Adam Warren , they demoted both Ben Gamel and Chasen Bradford to the minors.

Houston sent Kyle Tucker back to Triple-A to get him steady at-bats and back on track. Jake Marisnick takes his place on the roster. George Springer did jumping jacks to prove his shoulder health to his manager but still sat out. He’s day-to-day but could return sooner rather than later.

Washington released Shawn Kelley after throwing his glove to the mound after giving up a home run during a blowout win. Kelley’s 3.34 ERA and 0.96 WHIP in 35 innings will be claimed by someone. If it’s a team like the White Sox, he could be closing soon.

Oakland scratched Jed Lowrie prior to today’s game and Franklin Barreto filled in going 3-for-4 with a double, his fourth home run and three RBI. Not a Wally Pipp repeat, yet.

What to Watch For

Only a six-game slate for this evening but plenty to keep tabs of. Cole Hamels will make his Cubs debut in Pittsburgh.

Tampa Bay will immediately put Tyler Glasnow on the mound as their opener tonight. A key here, their pitching coach understands it takes taller guys to hone their mechanics. He’s six foot eight inches, as is Glasnow.

Rich Hill will face the new look Brewers. Milwaukee will play Jonathan Schoop at second base and Hernán Pérez at shortstop with a southpaw on the mound. Mike Moustakas will play third and Jesus Aguilar at first with Travis Shaw sitting. This could be a very fluid infield going forward to the frustration of fantasy owners.

Also, if the Brewers lead late, will Corey Knebel get the save chance? He was bypassed on Tuesday for Jeremy Jeffress . Stay tuned.

Last, but not least, Brian Dozier will debut for the Dodgers and hit fifth.

Be sure to check back in the morning with Fantasy Alarm’s Round Up to stay ahead of your competition.

B. Hamilton - CF
SF
Billy Hamilton and Jarlin Garcia have not been present for Giants' workouts thus far.
When asked about their absence, Giants manager Gabe Kapler said that he didn't have anything to report and stated that "this is where I'm going to leave that question. Hamilton was released by San Francisco near the end of June, but was one of four players who was cut and then immediately re-signed for logistical purposes.
Added 9:02 pm (EST)
Added 9:02 pm (EST)

N. Gorman - 3B
STL
Cardinals added RHP Nabil Crismatt, OF Tre Fletcher, 3B Nolan Gorman, LHP Matthew Liberatore, 3B Malcom Nunez, RHP Roel Ramirez, C Julio Rodriguez, RHP Angel Rondon, RHP Alvaro Seijas, 3B Jordan Walker and SS/RHP Masyn Winn to the Springfield roster for alternate camp.
Gorman and Liberatore are two of the best prospects in the system; ranking right behind OF Dylan Carlson, who has a chance to be in the Opening Day lineup for the Cardinals. Walker and Winn were drafted by St. Louis in June, and both offer significant fantasy upside. Neither player is likely to contribute before 2023, however.
Added 8:50 pm (EST)
Added 8:50 pm (EST)

M. Fulmer - SP
DET
Michael Fulmer allowed just an unearned run on Wednesday during an intersquad game.
He fanned one hitter. The right-hander was pitching in a "competitive" game for the first time since 2019, as he missed the spring while recovering from Tommy John reconstructive elbow surgery that March. He's now expected to be a part of the Tigers' rotation when the truncated season begins on July 24.
Added 8:38 pm (EST)
Added 8:38 pm (EST)

H. Dozier - RF
KC
Hunter Dozier left Wednesday's exhibition game after being hit by a pitch in his hand/wrist.
Dozier originally stayed in the contest after the knock, but did not take his place in right field in the next frame. This is likely precautionary, but we should have an update on the 29-year-old's status shortly.
Added 7:44 pm (EST)
Added 7:44 pm (EST)

J. Guerra - RP
ARI
Junior Guerra (COVID-19) has returned to summer camp for the Diamondbacks.
Guerra was able to return after testing negative for COVID-19 twice. He had tested positive back on July 5. The 35-year-old is expected to be a big part of the Arizona bullpen after signing a one-year, $2.55 million contract back in December.
Added 6:53 pm (EST)
Added 6:53 pm (EST)

B. Morrow - RP
CHI
Robert Murray, formerly of The Athletic, reports that the Cubs are releasing Brandon Morrow.
Baseball America also has Morrow's release listed in their transactions page. The right-hander was re-signed as a non-roster invite in December, but dealt with a Grade 1 calf tear that kept him from throwing for the final two weeks before the COVID-19 shutdown. The hard-throwing right-hander has dealt with a bevy of injuries in his career, and while this could just end up being a logistical move, it's also possible that Morrow's time with the Cubs is coming to a disappointing end. Jon Heyman of MLB Network reports that Morrow underwent a procedure for a pinched nerve, and does plan on pitching during the shortened 2020 campaign.
Added 6:20 pm (EST)
Added 6:20 pm (EST)

J. Teheran - SP
LAA
Angels manager Joe Maddon told reporters that Julio Teheran might not be ready for the start of the season.
Teheran is currently awaiting results from a COVID-19 test, but is hoping to join the Angels by the weekend. Even if he is able to report at that time, it does sound like because the former Atlanta starter will be behind, he may need a little bit more time before he's ready to join the Los Angeles rotation. While it may result in missing a start or two -- a bigger number than normal because of the truncated season, obviously -- it sounds like he should be there for the majority of the campaign.
Added 6:01 pm (EST)
Added 6:01 pm (EST)