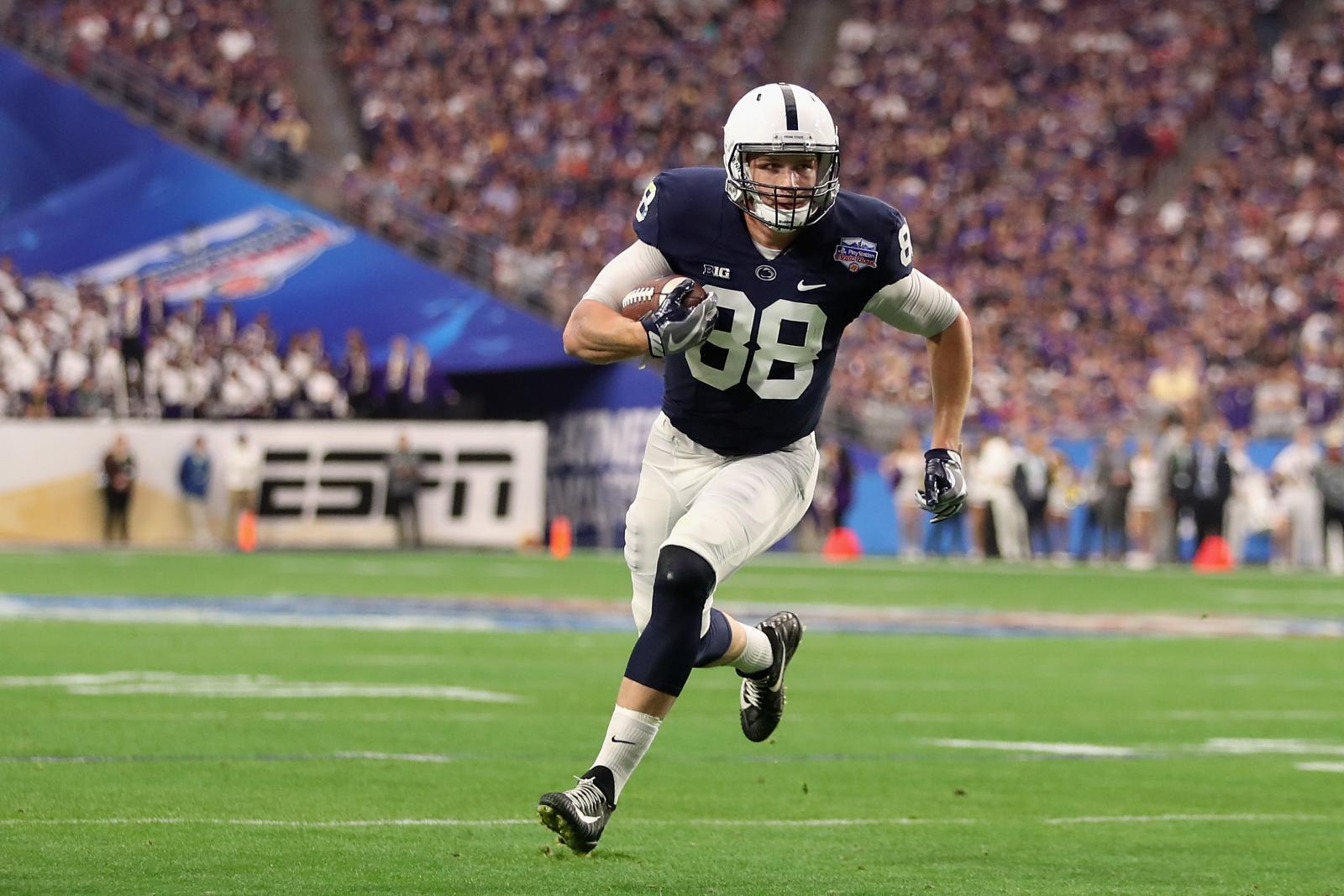 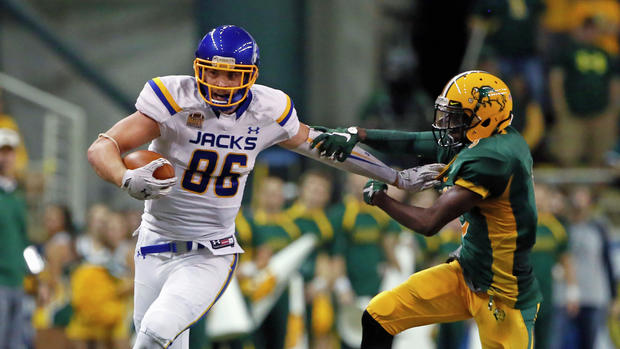 While he played against inferior competition in the FCS, Goedert is the top tight end in this class. He has been the most productive tight end in college football over the last two seasons, while his incredibly well rounded skill-set leaves him without many holes as a prospect. He’ll need some seasoning and some overall refinement early on, but what prospect doesn’t? In the right offense, he will make an immediate impact as a fantasy producer, while at the worst case scenario he will be ready to block and run routes down the seam at the NFL level from day one. He shows some shades of Jason Witten, but to avoid comparing him to a future Hall of Famer, think more of Hunter Henry type early on in his career.

Very much the modern tight end, Gesicki is long, lean, ultra-athletic, and a matchup nightmare. While he is likely to struggle as a blocker for the majority of his career, his size and prowess as a receiver will give him a long and successful career. After blowing up the NFL Combine and careful analysis of his tape, it is clear that Gesicki’s upside is in the Jimmy Graham stratosphere, which to me is enough to keep him in the upper echelon of this very talented position group, despite his unbalanced skillset. 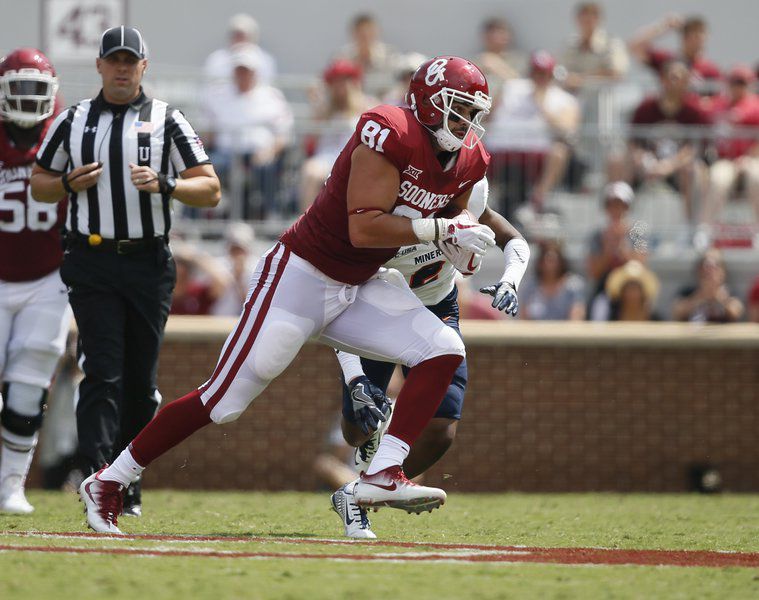 Right now, Andrews is more or less a one dimensional tight end prospect, as he struggles in the run and pass protection game, while he’s contrarily an excellent receiving threat. This is pretty clear on tape, but reading between the lines, I see a guy who can be more… On the surface, my Chris Cooley comparison will likely be mocked because Cooley was a far better blocker than Andrews currently is. He also proved to be one of the most versatile tight ends of his generation, while at the moment Andrews doesn’t look too comfortable operating anywhere else but the slot. Having said all of this though, in Andrews, I see a guy with more than enough athleticism and football IQ to move all over the formation in the same vein that Cooley did as an H-back throughout his career. Also like Cooley, I think that Andrews will project into the NFL as a possession receiver and run-after-the-catch guy more than the modern power forward/jump ball guy that you see at the position today. Once he can develop further as a blocker – even if he can just learn to get in the way and hold his block for a few seconds – Andrews is likely to be a three down tight end option. Potentially moving all around the formation, I see Andrews as a guy who will frequently cause mismatches and subsequently serve as a high-volume target. Remember his name in PPR formats.

A former star baseball prospect, Hurst is a multi-talented tight end prospect who displays a well-rounded athletic skill-set. Unfortunately for his sake, the once a budding minor league star developed a psychological disorder that derailed his baseball career. He went from throwing 97 mph to not being able to have a catch. Also known as the “yips” Hurst was forced to give up the sport that he loves due to the mental block, which proved to be a massive drain on his psychological well-being. Eventually he turned his still-existent athletic gifts towards football – a sport that would allow him physical and emotional release through aggression and the lack of time to overthink things. Despite being far older than usual, Hurst quickly became a star on the South Carolina offense. With a committed attitude in the run game and a surprisingly reliable set of hands as a receiver, Hurst has emerged as one of this class’ most talented tight end prospects.

As for the Delanie Walker comparison, while bigger than Walker, Hurst is similarly an excellent athlete and is also uniquely more of a possession receiver rather than a red zone option. In the right offense, I could see Hurst having the same type of high-volume target style of career that has seen Walker to three Pro Bowl trips. One last note about Hurst is that his age is likely to be a concern for some teams, but keep in mind that Brandon Weeden was drafted in the first round once upon a time, and he was almost 30-years-old. My point is that if a team likes a player, it doesn’t matter how old he is, they will likely pull the trigger. 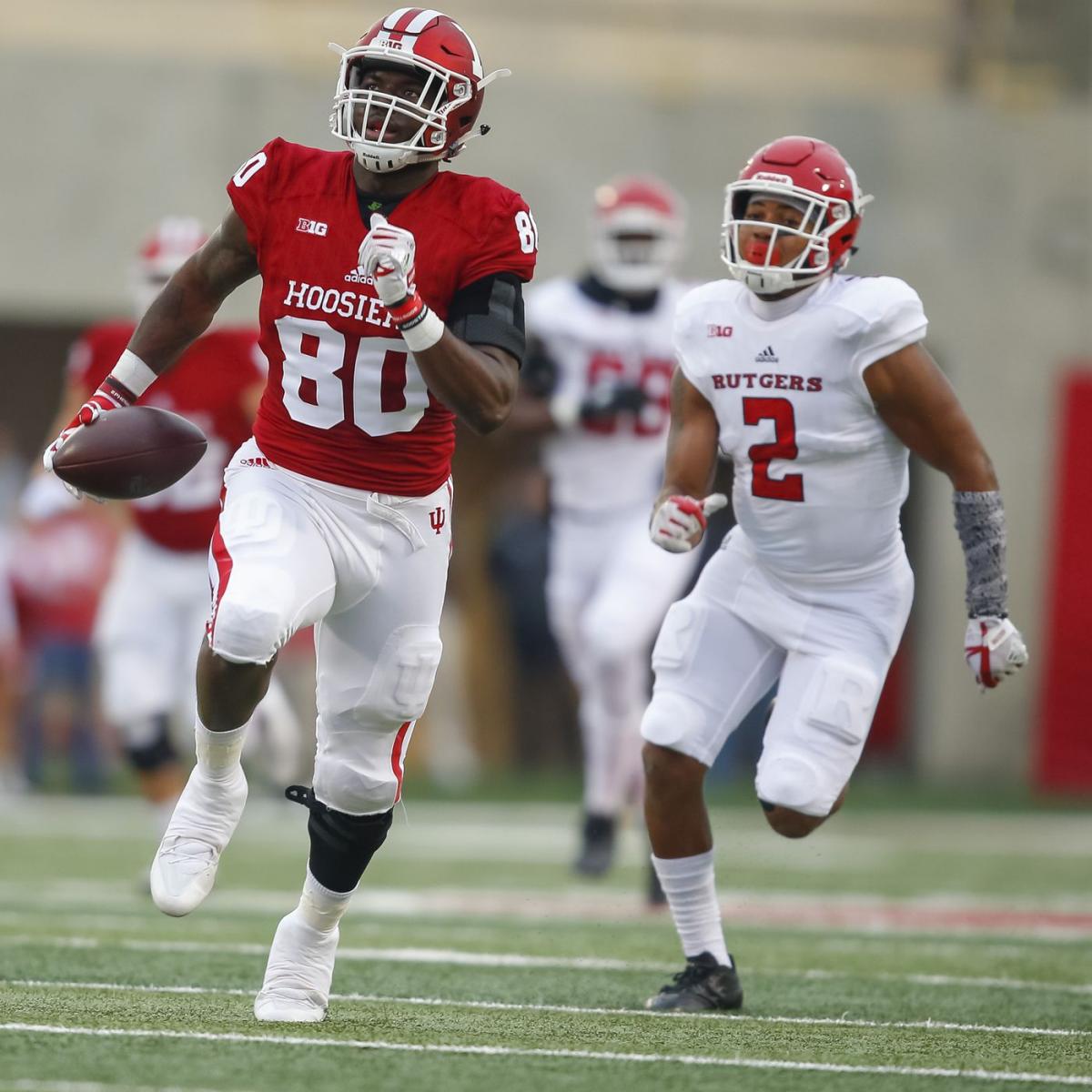 In terms of experience, Thomas is almost as raw as they come, however his tape shows a prospect with very few fatal flaws. In terms of potential, I see a complete tight end who can work both on and off the line of scrimmage, as a move blocker, and as a receiving slot option. I went with the Marcedes Lewis comp not because they measure in at the same size or tested similarly at the combine, but rather because like Thomas, Lewis was one of the more raw prospects in his class. He was knocked for his blocking ability coming out of college, however in the NFL he actually developed into one of the game’s best. I see the same type of moldable potential in Thomas. With some proper coaching and the time to develop, Thomas may end up being the best tight end in this entire draft class. He’s a guy to watch towards the end of day two.

Conklin is one of the smaller tight ends in this class, but he doesn’t exactly play like it, as he is seen frequently out-muscling and out-jumping defenders on tape. Despite being a team captain and the most targeted option in his offense – or in other words, the key player defenses would target – Conklin still always seemed to come down with the football through all types of contested coverage. He shows comfort lining up all over the formation, as a move player, slot receiver, fullback, inline tight end, and most impressively as an outside island flanker. While he’s not the best blocker right now, he shows willingness and toughness in that area and some developable traits. Ultimately though, in the NFL his calling card will be what he can do in the passing game. Based off of his underwhelming size but impressive receiving prowess for the position, I stumbled upon the sure handed Dallas Clark for his comparison. Someone is going to get themselves a steal on day three of the draft. 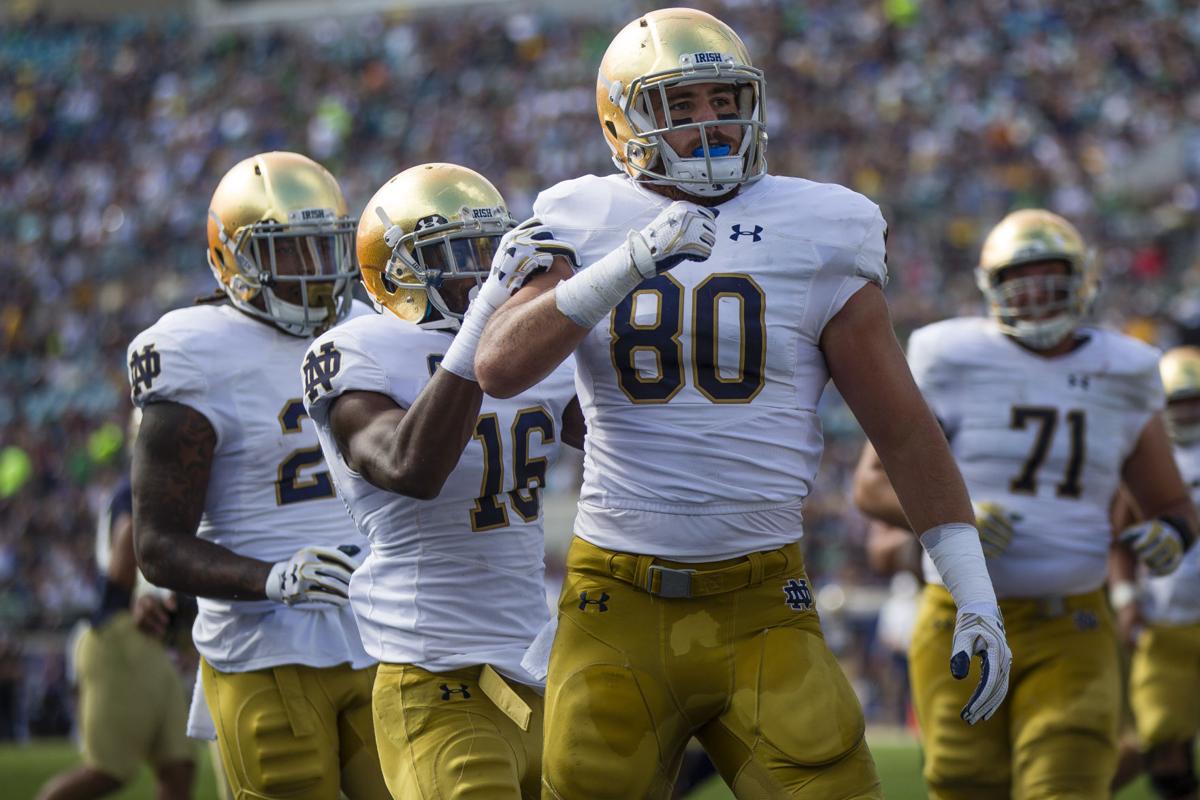 While Smythe is largely maxed out in terms of potential, his current form is more than ready to serve as a starting tight end in the NFL. He’s an accomplished blocker and an imposing physical specimen at the point of attack, while he also offers a reliable set of hands as a possession receiver and red zone threat. He’s unlikely to make any Pro Bowls in his career, but he will play in this league for a long time as a traditional inline tight end, something that not many other TE’s in this class can say.

Herndon is very much built in the mold of the modern NFL tight end – a player who while well built, would rather utilize his gifts as a finesse receiver. On talent alone, he’s more than draftable, however the concerns with his knee and his lack of commitment in the run game will ding his draft stock for sure. A team who feels comfortable with his medicals and has a plan on how to maximize his athletic gifts (slot receiver/H-back/hybrid move player) will get good value on Herndon at the beginning of day three. 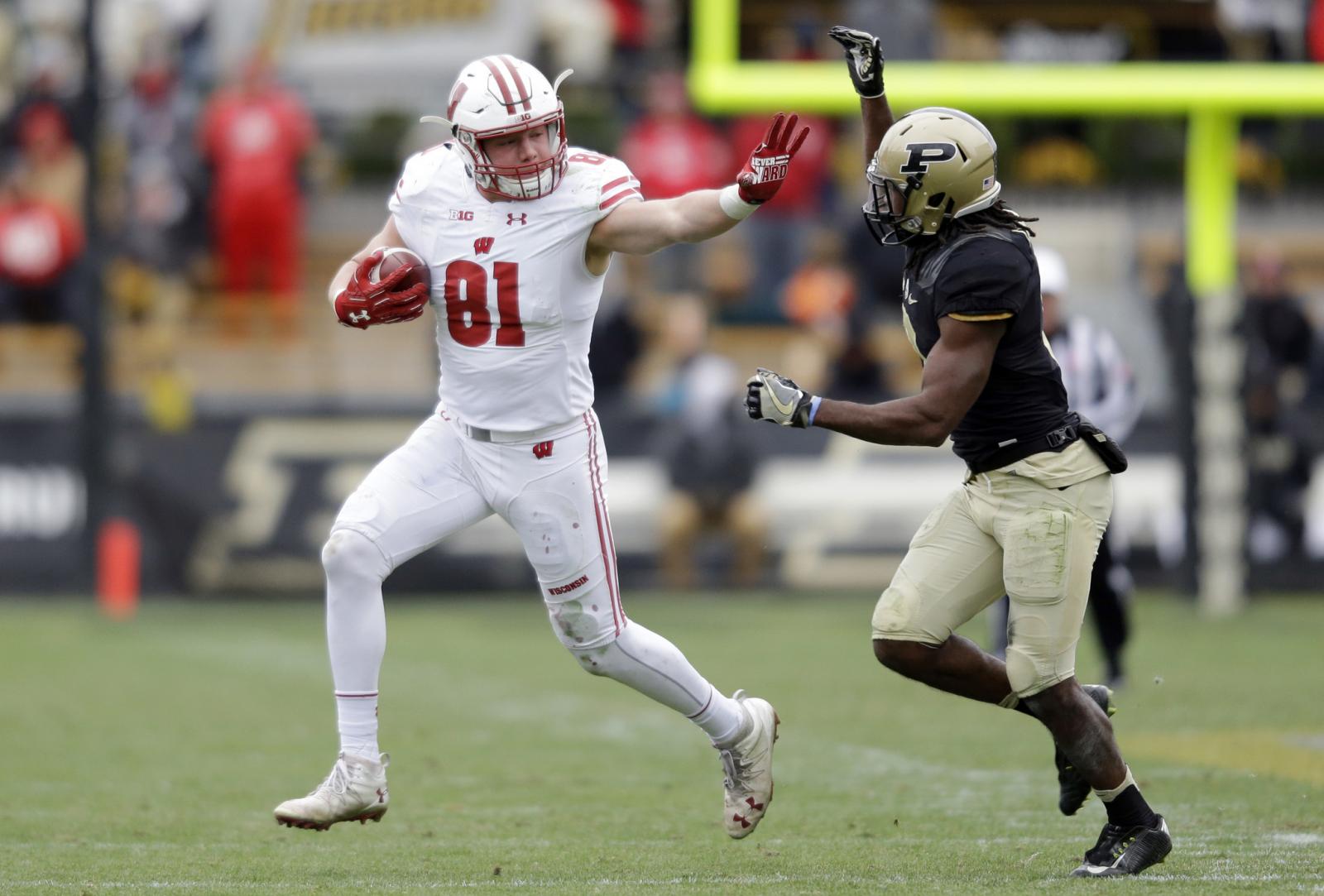 While a nice player, Fumagalli is a guy who clearly has been maxed out physically. At this point, what you see is what you get. He’s rather well-rounded at most of the tight end craft, but he will never be able to excel at the NFL level due to his limited athleticism. Think of him as a Luke Stocker type, who made a career as a secondary tight end option. In that vein, Fumagalli will best maintain an NFL career through a stronger commitment to improving in the run game.