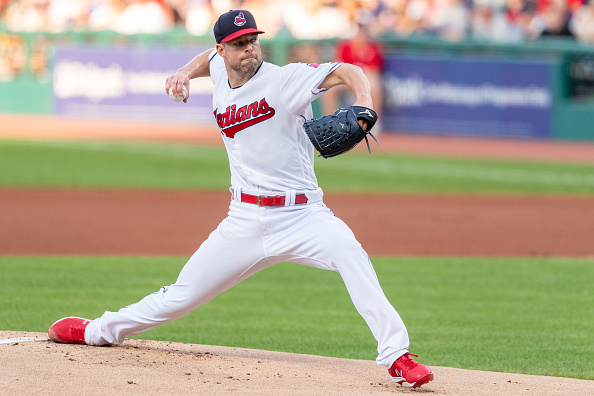 There are plenty of top-level pitchers scheduled to make two starts this coming week in baseball, as well as a fair number of middle-tier options to choose from as well. Although teams have called up their prospects for the end of the season, for fantasy purposes, managers are still rolling out their proven starters, which benefits the fantasy owners still in the hunt for a championship in 2018. Of course, there are those pitchers residing in the bottom tier that it is suggested you avoid, including a surprise denizen who is discussed a bit below.

These are the SPs you should be inserting into your rotations in Week Twenty-Three without hesitation. Do not concern yourself with matchups, instead be thankful you drafted or added these hurlers to your squad this season, and roll them out there for both their scheduled trips to toe the rubber.

LeBlanc is a pitcher in a groove right now, with a streak of three quality starts (QS) consisting of nineteen innings of one earned run superior pitching effort. He has a pair of good matchups in store this coming scoring period, and thus tops the middle tier options available. He is not a great K producer as a rule, but he does face the free-swinging Padres at home in his first Week Twenty-Three trip to the mound.

Another Wade, the 31-year old Milwaukee southpaw Miley, slides in as the second-best middle group option this coming week. He is another poor strikeout SP posting a6.22 K/9 through 63.2 innings pitched (IP), but then again, he has held opponents to three or fewer earned runs in all of his 10 starts since mid-July. The sample size is limited, but he has been superb on the road, so even taking on the Cubs at Wrigley plays in his favor.

Rodriguez, the rookie righty is sporting an excellent set of ratio stats with a 2.41 ERA and 1.05 WHIP, through his 97.0 IP on the season. He has a pair of home starts in the coming week. Continuing a theme to start off the middle tier, his swing and miss numbers are not impressive (7.24 K/9 over 17 appearances/15 starts) but he does feature good control (2.51 BB/9) and keeps the ball in the park (0.56 HR/9).

Minor is another pitcher relying on his control to be effective on the bump (2.06 BB/9 through 140.0 IP) with weak strikeout numbers (7.59 K/9 in 25 starts this season). It is a concern that he has to pitch on the road for both his Twenty-Three starts, although matchups against the Padres and Angels temper that circumstance to a certain degree.

Barria has allowed just six earned runs over his last six starts, and four of those were in a shortened three inning stint against the Astros on August 25th. Normally, two home starts would be a positive factor in evaluating a starting pitcher, but the 22-year old right hander has been much more effective on the road this season. His first start against the visiting Rangers looks like the better appearance to utilize his skills, which include mediocre K production (6.93 K/9 through his 111.2 IP).

Fiers has been rejuvenated since the Tigers shipped him out west to the A’s, and gets a tasty matchup to open the week against the Orioles. Taking on the Rays on the road to wind up Week Twenty-Three is less favorable for the veteran righty, and as with all the other middle tier SPs profiled so far, he is not a great K option on the hill, with a below-average 7.19 K/9. Oakland will look for Fiers to keep them in these games as they battle for the AL West division title.

Keller has twirled three QS in his last five starts, despite a severely sub-par ability to miss bats, as evidenced by his weak 6.06 K/9 rate over 120.1 IP this year. He faces a pair of division rivals at home in the form of the White Sox and Twins in Week Twenty-Three, and he has been more effective at home than on the road in 2018.

Wainwright comes back after pitching effectively in his six rehab appearances, posting 23 Ks without allowing an earned tally through those 17 IP. He was not exactly inspiring confidence when he was placed on the 60-day DL in May of this year, but the rehab assignment leads to hope he can be productive to wrap up the season. Both his Week Twenty-Three starts are at home, so there is that going for him to boot.

Newcomb has been inconsistent at best lately, but does have a couple of decent matchups on tap this coming week, heading to San Fran to take on the host Giants and then returning to SunTrust Park to face the Nationals. Given his struggles at home, though, it would be prudent to think long and hard about using him for both his trips to the mound, and perhaps avoid his home start to wind up the scoring period.

Alcantara has limited MLB experience to consider, but he does feature a fastball that can exceed 100 MPH, and has averaged 94 MPH over his two starts with the Marlins this season. He is away from Miami for his two starts in the coming week, but gets to take on the Mets to open the scoring period, which is a plus. Facing off against the Phillies in Citizens Bank Park to wrap up the week looks less promising, so he is more of a one-start SP than a pitcher to roll out there for both his appearances.

Vargas is another SP who has one good matchup, and one that is much dicer in the coming week. Use him and his average K potential (7.73 K/9 through 17 starts comprising 73.1 IP in 2018 for the Mets) at home against the Marlins and sit him on the bench for a road start in Fenway Park.

Sale is relegated to the bottom tier due to the intention of the Red Sox to severely limit his innings during his return to the rotation. He is scheduled to pitch two innings against the Blue Jays to open the week, and if all goes well, will toss three frames on Sunday against the visiting Mets offense. With such limited exposure, he is not exactly the poster boy for great stat accumulation in Week Twenty-Three. Nary a one of the other thirteen SPs in this tier should be in your starting lineups if you value your pitching stat lines.