Howard Bender pores over the data and match-ups to bring you his favorite plays for Week 9 NFL DFS main slate contests. 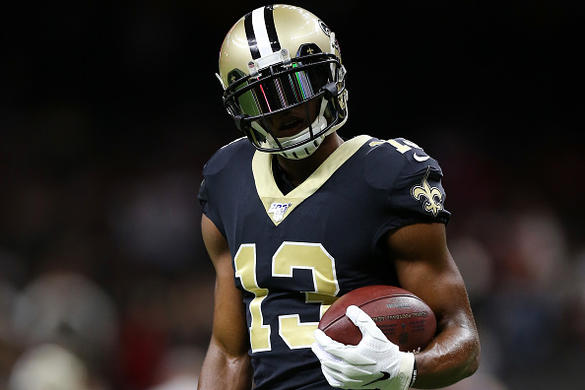 Welcome to the DFS Playbook for NFL Week 10!

Last week was some week, wasn’t it? Using just the Playbook and Dart Board, you could have put together a Draft Kings lineup that would have scored in excess of 250 points which would have taken down a substantial amount of money. Of course, when it came down to lineup construction for me, I had a brain cramp and tried to get greedy. I pivoted off Russell Wilson to jam in the likes of Aaron Jones , Chris Godwin , Kenny Golladay and Stefon Diggs into my lineups and while some hit, the QB production I got out of Aaron Rodgers and Derek Carr was less than anticipated.

Let that be a lesson to all of you. Be sensible. If your research points you to a player as someone who you want/should lock into your lineups, stay with him. Your work brought you to him for a reason. So why did I pivot? I got nervous that the bargain guys I was using to fit Wilson wouldn’t give me the ROI necessary to stay about the cash-game payline. Hindsight shows me that Wilson’s production would have made up for any potential shortcomings around my lineup and while I don’t like to rely on that regularly, trusting the process means accepting that help some weeks and not needing it in others. The process is the process and deviating is a sure-fire way to end up where I did last week – chock full of regret and playing the “coulda, shoulda, woulda” game.

Not this week, baby! No way! We’ve got six teams on bye and some phenomenal options off the table for the Main Slate. No Chargers or Raiders. No Cowboys or Vikings. And no Seahawks or 49ers. We do have a number of tasty options and some of these match-ups – TB/ARI, BAL/CIN, IND/MIA & NO/ATL – are going to need to be heavily exploited.

A. Brown - WR
NE
NFL Network's Mike Garafolo said there is "a shot" the Seahawks sign free agent Antonio Brown.
Russell Wilson has reportedly been lobbying for his front office to sign Brown, who worked out with Russ in San Diego on Wednesday. Garafolo notes Brown would love to play in Seattle but that the Seahawks could be waiting for Brown's potential league punishment to be sorted out first. As long as Brown stays out of trouble over the next two months, there's a chance he ends up playing in 2020, even if it does in fact come after a lengthy suspension. A three-receiver set of Brown, Tyler Lockett, and DK Metcalf could force the run-obsessed Seahawks to finally let Russ cook. Brown is reportedly wanted by Lamar Jackson, Deshaun Watson, and other star quarterbacks.
Added Jul 02 7:21 pm (EST)
Added Jul 02 7:21 pm (EST)

J. Elliott - DL
CLE
Browns signed third-round DT Jordan Elliott to a four-year contract.
Elliott was a top-25 player on some boards. Elliott (6’4/302) went to Texas as a top-150 high school recruit but transferred to Missouri where he started two seasons. He transformed his body going into his redshirt junior season, which led to more twitch off the line of scrimmage and more disruption with his pass rushing moves. His trimmed down build didn’t affect his play strength either. He remained strong against the run and eventually earned second-team Associated Press All-American after compiling 31 tackles, 8.5 TFLs, and 2.5 sacks. A 65th percentile Adjusted SPARQ athlete, Elliott offers quality starter potential at multiple interior positions, especially if he continues reshaping his physical build.
Added Jul 02 2:32 pm (EST)
Added Jul 02 2:32 pm (EST)