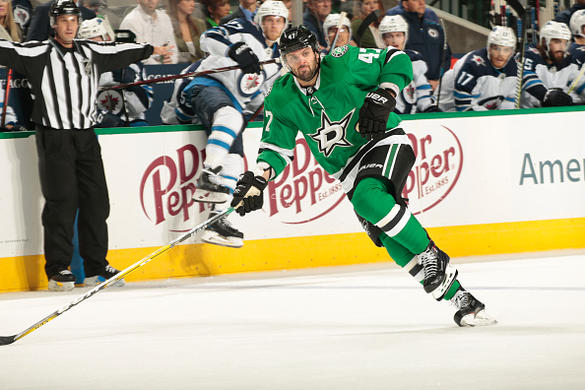 It’s so sad that this Canucks team can’t stay healthy. They are actually a pretty decent team, but they can’t keep bodies on the ice. Brock Boeser is once again dealing with a lower-body injury and right now, he’s considered day-to-day. Maybe he will play tonight (Tuesday) and everything will be fine, but players who aren’t 100% and continue to play is never a good thing. Boeser is a fantasy stud and owners just want to him to stay healthy. Let’s keep an eye on his status and hope it’s nothing too serious.

NHL Corey Crawford not available for start of camp

NHL Flyers focusing on next season for Patrick

NHL Bryan Little won't be an option for Return to Play

M. Grigorenko - C
COL
Mikhail Grigorenko has signed one-year deal with the Columbus Blue Jackets for the 2020-21 season.
The contract is worth $1.2-million. It's the same deal that was signed back on April 20, which ended up getting voided because it had to come when the free agent period opened following the current NHL season. The two sides remained committed to honoring the agreement and it was re-submitted today when Grigorenko was officially eligible to sign a 2020-21 NHL deal.
Added Yesterday 7:17 pm (EST)
Added Yesterday 7:17 pm (EST)

R. Bortuzzo - D
STL
Robert Bortuzzo didn't take part in Monday's practice.
The Blues expect to get Bortuzzo back at some point this week. Consider him day-to-day for now. Team are not permitted to discuss injuries or COVID-19 cases during Phase 3 and 4 of the NHL Return to Play Program. The start of training camps on Monday signaled the start of Phase 3.
Added Yesterday 7:11 pm (EST)
Added Yesterday 7:11 pm (EST)

C. Parayko - D
STL
Colton Parayko didn't take part in practice on Monday.
Parayko and Robert Bortuzzo weren't available for the start of training camp during Phase 3 of the NHL Return to Play Program. "They'll be back in short order. We're not allowed to talk about it," Blues GM Doug Armstrong said. "You'll see them on the ice this week."
Added Yesterday 7:07 pm (EST)
Added Yesterday 7:07 pm (EST)

A. Pietrangelo - D
STL
Alex Pietrangelo hopes to re-sign with the St. Louis Blues.
"Not much to say about it other than the same thing [general manager Doug Armstrong] said," said Pietrangelo on Monday after returning to practice during Phase 3 of the NHL Return to Play Program. "The goal is to get something done. That's been the goal since the beginning. We'll see where things go. [The] focus right now is to get through this thing healthy and playing. We'll see where things end up." Blues GM Doug Armstrong stated that talks are unlikely to occur until the season is over. The Blues captain can become an unrestricted free agent after the 2019-20 season wraps up. Pietrangelo and St. Louis will look to defend their Stanley Cup championship from last year during Phase 4 of the NHL's return.
Added Yesterday 6:58 pm (EST)
Added Yesterday 6:58 pm (EST)

J. Korpisalo - G
CBJ
Columbus coach John Tortorella said a decision on who will start in goal during the qualifying round will be made over the course of camp.
Tortorella feels that both goaltenders deserve a chance to play. The team intends to take it day by day during camp and decide who will play when the games get closer. Korpisalo started 35 games (19 wins, 2.60 GAA, .911 save percentage) during the 2019-20 campaign, while Merzlikins made 31 starts (13 wins, 2.35 GAA, .923 save percentage).
Added Yesterday 5:55 pm (EST)
Added Yesterday 5:55 pm (EST)