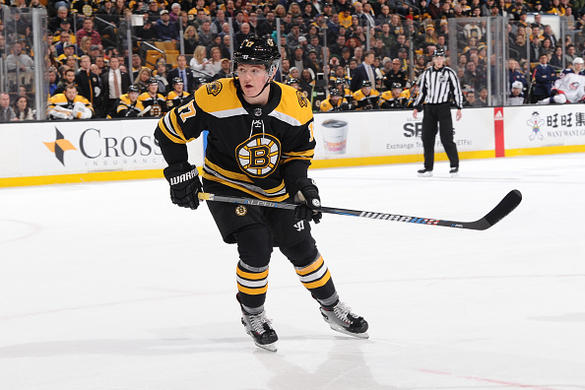 The Bruins signed Donato last week, and then he debuted with a three-point effort against Columbus! The 21-year-old Bostonian followed up that performance with his second NHL goal at St. Louis. He has produced goals in each of his first two contests in the big league and registered four points in total. Things will not always be this easy for the son of former NHL Ted Donato, but he could now be a difference-maker in many fantasy leagues.

The Blues were supposed to be out of the playoff picture after trading away center Paul Stastny at the deadline, but they continue to hang around (they are currently 2 points behind LA for the final Wild Card position in the Western Conference). Dunn has been a big part of the team's recent resurgence with four points in his last two games--including a four-point effort against Chicago recently. Dunn seems like the team's new power-play QB.

The 24-year-old Swede never truly emerged as a top-six winger in Nashville, though he did show plenty of flashes. In fact, he looked good during last spring's run to the Stanley Cup finals. Traded to Edmonton at the deadline, Aberg has registered points in each of his last two games as an Oiler (though the contests were sandwiched between a two-game ban for disciplinary reasons). At this point, Aberg is worth a late-season shot. 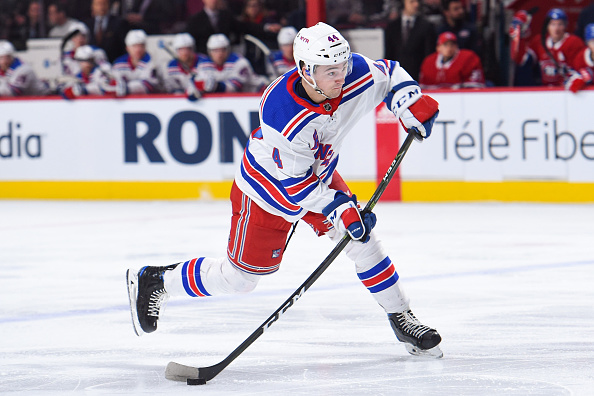 When the Rangers signed Pionk as a free agent out of college hockey in 2017, they might not have expected such impressive play (and production) this quickly. The former University of Minnesota-Duluth defenseman has recorded five points in his last three games for New York and now boasts 11 points (all assists) in his first 19 NHL games. He is a virtual lock to be with the Blueshirts in '18-19 and should be considered a potential keeper.

It has taken McCann some time to get his offensive bearings at the NHL level but Florida's patience is starting to get rewarded. Serving as Florida's third-line center for much of the 2017-18 campaign, McCann has notched three points in his last two games for a total of 23 points in 58 games. Only 21 years old, McCann still owns some long-range upside as a productive, two-way center. He could be worth a pickup if he remains en fuego.

In most leagues, Toews is not available at this time. However, in some shallower leagues he may have been dropped earlier this season. It is time to pick him back up, especially since the Chicago captain has been reunited with star winger Patrick Kane in recent games. If the Blackhawks decide to keep the pairing together in 2018-19, Toews' fantasy value will spike up significantly. It might be what both veterans need to bounce back.

The Russian netminder has been a feel-good story in New York during the second half of an overall miserable 2017-18 season. The 22-year-old Muscovite has gone 3-0-1 with a 2.90 goals-against average and .923 save percentage in his last five contests--not bad for a first-year pro who spent the previous three seasons in Finland with TPS Turku. As things stand right now, Georgiev is the favorite to back up Henrik Lundqvist next season. 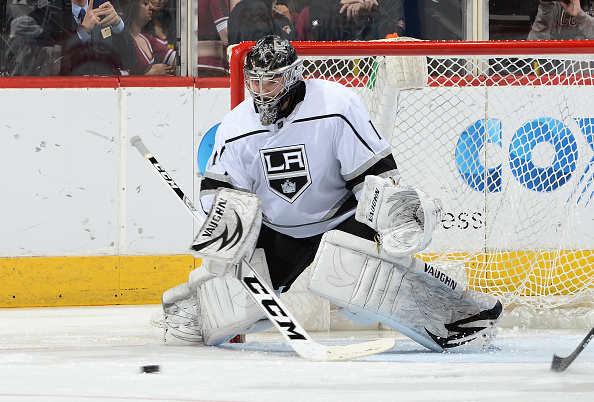 Speaking of feel-good backup goaltending stories, Campbell has finally arrived as a National Hockey League netminder. When Los Angeles traded backup Darcy Kuemper to Arizona at the deadline earlier this year, it signaled a vote of confidence for the 26-year-old Campbell (a first-round pick by Dallas in 2010). Campbell has some fantasy dark horse appeal heading into 2018-19 and should be a capable handcuff for Jonathan Quick.

Who? His name may not say much at present time but Schuldt is expected to be one of the prized, late-season acquisitions from the NCAA ranks this year. The junior blueliner from St. Cloud State University is currently flirting with the point-per-game mark (39 GP, 10-28-38) as team captain of the Huskies. Schuldt, who turns 23 next month, should be a consideration in deep keeper leagues even before his NHL destination is announced.

It has been a frustrating second half of the 2017-18 campaign in Raleigh, as the Hurricanes have slipped out of playoff contention. Therefore, expect to see a lot of Zykov in the final nine games. The leading scorer for the AHL's Charlotte Checkers this season, Zykov is still only 22 years old and has obvious goal-scoring acumen. So, the Russian could work his way into a top-six winger role before the end of '17-18. He is a true fantasy sleeper.

J. Markstrom - G
VAN
Jacob Markstrom captured the Cyclone Taylor Trophy, which goes to the Canucks' MVP, as voted by the fans.
Markstrom also earned the Canucks Three Stars Award. The 30-year-old netminder posted a 23-16-4 record during the 2019-20 season to go with a 2.75 goals-against average and .918 save percentage in 43 appearances.
Added 11:50 am (EST)
Added 11:50 am (EST)

I. Provorov - D
PHI
Ivan Provorov was selected as the Flyers 2019-20 Barry Ashbee Trophy.
The award goes to the Flyers "most outstanding defenseman," as determined by a panel of broadcasters and sports writers. Provorov had 13 goals and 36 points in 69 games this season before the pause. "It's just a great honor," Provorov said. "There are a lot of great defensemen that have played for the Flyers and have won this in the past. I think overall this year, our defense is a lot better. We're defending as a five-man unit, the forwards are backchecking, so it allows us to step up and get the puck back faster."
Added 9:49 am (EST)
Added 9:49 am (EST)

H. Lundqvist - G
NYR
Henrik Lundqvist skated on Thursday for the first time since heading back to New York.
Lundqvist had previously been in Europe. After coming back, he needed to be cleared before he could start participating in Phase 2 workouts.  “Feels good to be back on the ice at the training center again," Lundqvist said on Instagram. He'll have a tough time getting a start in the playoffs though given that the Rangers also have goaltenders Alexandar Georgiev and Igor Shesterkin.
Added 9:27 am (EST)
Added 9:27 am (EST)

M. Seider - D
DET
Moritz Seider will be a player to watch for the Red Wings during next season's training camp.
Seider was taken with the sixth overall pick in the 2019 NHL Entry Draft. After scoring two goals and 22 points in 49 AHL games in 2019-20, the 19-year-old defenseman will have a real shot of making the Red Wings for the 2020-21 campaign. Even if he doesn't make the team out of training camp, he might end up making his debut next season after a bit more seasoning in the AHL. He's one to watch given his high offensive potential.
Added 8:48 am (EST)
Added 8:48 am (EST)

M. Lucic - F
CGY
Milan Lucic has loved his time so far with the Calgary Flames.
Lucic had eight goals and 20 points in 68 games with Calgary before the pause. While those aren't big numbers, he wasn't expected to be a big offensive contributor. What he has been is a physical force and locker room favorite. “I’ve really enjoyed everyone here,” Lucic said. “I was finding it fun again, I was having fun going to the arena and being around my teammates. It was fun going to practice. It’s always been fun playing games. But for me personally, I think the positives of everything have outweighed the negatives. That’s why I would love nothing more to see how the final chapter ends. That’s why I have my fingers crossed.” Lucic and the Flames are looking towards the start of training camp on July 13.
Added 8:45 am (EST)
Added 8:45 am (EST)

B. Horvat - F
VAN
Bo Horvat has plenty of confidence in the young core of the Vancouver Canucks.
"I think they will be up for it," Horvat said Thursday. "They know what it takes to win, and they know what playoff hockey is like. I think they are going to be ready for it. They have the game to suit the playoffs. I don't think there's much to be said, I think they just know what needs to be done and our main goal at the end of it." The Canucks captain had 16 goals and 45 points in 57 games during the 2019-20 season. Vancouver is set to play against Minnesota in a best-of-five series during the Stanley Cup Qualifier round.
Added Yesterday 7:16 pm (EST)
Added Yesterday 7:16 pm (EST)

B. Seabrook - D
CHI
Brent Seabrook was on the ice with his Chicago teammates for a voluntary skate on Thursday.
Seabrook hopes to be available to play when the team is scheduled to return to action in August. He is coming off surgeries to his right shoulder (Dec. 27), left hip (January) and right hip (Feb. 6). Seabrook was limited to just 32 games in 2019-20.
Added Yesterday 5:38 pm (EST)
Added Yesterday 5:38 pm (EST)

K. Middleton - D
SJ
Keaton Middleton has signed with the AHL's Colorado Eagles for the 2020-21 season.
Middleton posted four goals and 13 points in 41 games with the San Jose Barracuda of the AHL last season. The 22-year-old defender was initially selected in the fourth round (101st overall) of the 2016 NHL Entry Draft.
Added Yesterday 3:13 pm (EST)
Added Yesterday 3:13 pm (EST)