Steve Pimental does a deep dive into the offseason of the Atlanta Dream including their acquisitions and losses and what the fantasy outlook is like for key players. 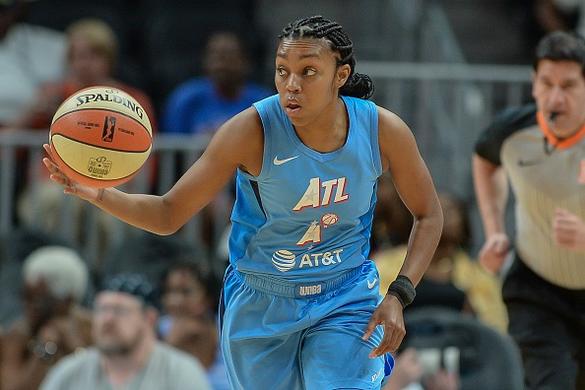 The Dream made a bunch of moves this offseason, but were they doing anything more than rearranging deck chairs on the Titanic? The Dream finished dead last in 2019, and they are tied with the Wings for the worst championship odds this season, but that may actually be overly harsh.

I’m not sure how much better Atlanta will be, but I believe they will be better, especially if they keep the fourth pick in the WNBA draft. The Dream finished with the worst offensive rating in the league last season, a full four points per 100 possessions behind the next-worst team. If nothing else, they should have an easier time scoring thanks to the addition of Courtney Williams.

Williams has averaged at least 16.0 points per 36 minutes in each of her last four seasons, and there is a strong chance she will have a career-high usage rate on her new team. I’m not sure Williams and Tiffany Hayes are good enough to carry a league-average offense, but they have a chance.

The other thing Atlanta accomplished was getting younger and raising their long term ceiling with the addition of Kalani Brown. At the very least, the Dream shouldn’t lose anything by giving Jessica Breland’s minutes to Brown, especially on the defensive end. It is hard to know what exactly Brown will bring on offense, but she has the size and athleticism to be effective.

For all the moves Atlanta made, they had a couple more thwarted. Atlanta signed Astou Ndour and Tiffany Mitchell to three-year offer sheets, only to see their respective teams match. The Fever probably did Atlanta a favor, as Mitchell has done nothing in multiple opportunities to prove she is worth such a lucrative contract. Check out my Fever Offseason Breakdown for more of my thoughts on Mitchell.

Ndour’s shooting would make just about any team better, but the Dream got a nice consolation prize in the form of Glory Johnson. Johnson’s numbers have plummeted the last two seasons, and while it was easy to blame 2018 on Liz Cambage’s return to the WNBA, 2019 is much harder to explain. The best guess here is that Johnson missed the presence of Skylar Diggins last season, and if that is the case, it’s doubtful her numbers will be much better in 2020, considering Atlanta doesn’t really have a starting point guard. Johnson is on a one-year deal, and she has to know this is her last best chance to return to her All-Star form and sign a lucrative multi-year contract. If she has anything left in the tank, I bet we will see it this season.

One thing that should help Johnson and her teammates on the offensive end is the floor spacing provided by Shekinna Stricklen. Stricklen was third in the WNBA in three-pointers made last season, shooting 38.2 percent on threes. As a team last season, Atlanta shot a league-worst  29.0 percent on threes. The next worst team was Phoenix at 32.5 percent.

Atlanta could go in just about any direction with the fourth overall draft pick. They don’t really need another big, but if Lauren Cox somehow falls to them, they’ll likely just take her and figure it out. Assuming Cox, Sabrina Ionescu and Satou Sabally are off the board, there isn’t really an obvious choice. Tyasha Harris or Chennedy Carter would make sense as point guards who would likely back up Renee Montgomery initially but could take her starting job as soon as this season. Ruthy Hebard could be a long term frontcourt mate to Kalani Brown.

Atlanta's best lineup probably features Shekinna Stricklen at SF with Renee Montgomery on the bench, though it is unclear how much head coach Nicki Collen will play Courtney Williams at PG. If Williams is effective in that role, Stricklen's floor spacing should provide more offensive juice for a team that really needed it in 2019. Kalani Brown also has a chance to play her way into the starting lineup, but head coach Nicki Collen seems likely to start the veterans, at least early on. Elizabeth Williams has started 132 out of 133 games she has played over her four seasons in Atlanta.

In letting Angel McCoughtry, the best player in franchise history, walk this offseason, the Dream have turned a new page in their franchise’s history. They are in a rebuild, the length of which could be determined in large part by how they fare this season. Atlanta is a great bet to finish in the lottery yet again, though I suspect they will have a better record than Indiana and possibly even New York. While Courtney Williams and head coach Nicki Collen are too competitive to tank, per se, we may see Kalani Brown and Atlanta’s rookies get more playing time down the stretch if Atlanta is out of the playoff race. The Dream could also look to trade Renee Montgomery and Glory Johnson before the trade deadline, as both are unrestricted free agents after the 2020 season.

Even at 100/1, I cannot think of a single reason to bet the Dream to win the title. I don’t think they’ll be the worst team in the league, Indiana has that distinction, but I prefer Dallas to Atlanta at the same odds. Barring injuries, the Dream will not have the best player in any game this season, and while their starting lineup is solid, they don’t have the depth to make up for a lack of top-end talent.

Courtney Williams and Tiffany Hayes may be my favorite fantasy plays at the start of the season. Williams should benefit from being the number one offensive option, while Tiffany Hayes should benefit from not having to be the number one option. Williams was 25th in the WNBA in usage last season, despite having to share the ball with Jasmine Thomas and Connecticut’s talented frontcourt. I expect Williams’s usage to be in the top 10 this season, and even if her efficiency suffers, the added volume should make up for it.

Tiffany Hayes, on the other hand, was eighth in the league in usage, which led to the lowest true shooting percentage of her career. With Courtney Williams shouldering more of the offensive burden, I think Hayes’s efficiency will rebound, but she’ll still get more than enough shots to be effective for fantasy. Hayes averaged a career-high 28.1 fantasy points in 2018, and I’ll take the over on that number for 2020.

The other Dream players with the potential for a fantasy impact are Glory Johnson and Kalani Brown. Johnson averaged 27+ fantasy points in each of her first five WNBA seasons, but she has been under 21 fppg in each of her last two seasons. I’m not necessarily expecting a change of scenery to lead to more fantasy points, but stranger things have happened. I would probably like Johnson a little bit better if Atlanta added another point guard who could get her the ball in good spots.

If I had to bet on one Atlanta big to go off for fantasy, it would be Kalani Brown. Brown averaged 0.93 fantasy points per minute last season with the Sparks despite an 18.1 percent usage rate. Her minutes should increase significantly in Atlanta, and if her usage rises as well, Brown could easily average 30 fantasy points per game or even more.