Steve Pimental does a deep dive into the offseason of the Chicago Sky including their acquisitions and losses and what the fantasy outlook is like for key players. 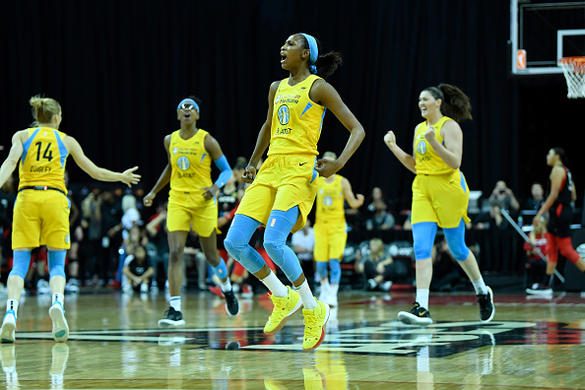 - The Sky sign-and-trade Astou Ndour to the Dallas Wings for the Phoenix Mercury’s 2021 first-round draft pick.

- The Sky re-sign Allie Quigley to a multi-year deal

- The Sky re-sign Courtney Vandersloot to a multi-year deal

- The Sky re-sign Stefanie Dolson to a multi-year deal

- The Sky trade Katie Lou Samuelson and their 2021 first-round pick to the Dallas Wings for Azura Stevens.

Altogether, the Sky traded Astou Ndour, Katie Lou Samuelson and their 2021 first-round pick to Dallas for Azura Stevens and Phoenix’s 2021 first-round pick. I think the value of these picks is roughly the same, though I might be in the minority. If anything, I would probably rather own Phoenix’s pick because I think it has a better chance to end in the lottery.

Even if I would rather own Phoenix’s first-round draft pick next season, I still hate these trades for the Sky. The Sky are hoping Azura Stevens will stay healthy--she played just nine games last season--and will replace Astou Ndour’s size and shooting at a cheaper price (at least until next offseason, when Stevens will be a restricted free agent).

The price of saving that money was Katie Lou Samuelson, the second-year player who was drafted immediately ahead of Arike Ogunbowale and Napheesa Collier. Samuelson struggled to find much of a role as a rookie, averaging 7.6 mpg in 20 games, and it is reasonable to think the same would be true in 2020, even if she managed to stay healthy. That being said, it seems far too early to give up on Samuelson, especially after you reached to draft her in the first place.

To be fair, I would probably like Chicago’s trades more if I agreed with how they spent the money they saved. The Sky used that money to re-sign backup guard Kahleah Copper for $165,000 per year for two years. Even if you look at Copper as part of the trades with Dallas, I’d rather have Samuelson and Ndour over Stevens and Copper. 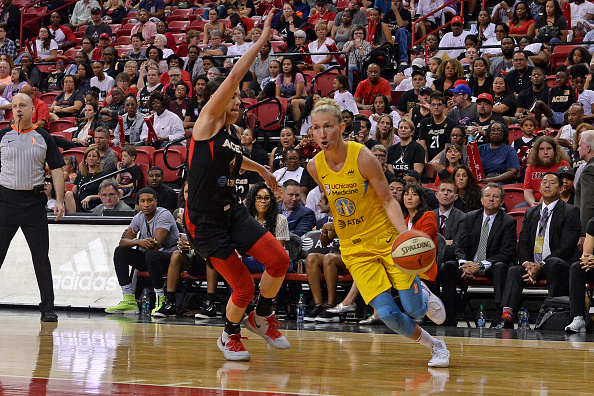 Kahleah Copper has averaged between 14.8 and 16.2 mpg in her four WNBA seasons, and barring an injury to Courtney Vandersloot, Allie Quigley or Diamond DeShields, it is difficult to see that changing. Copper shot a career-low 38.7 percent from the field last season, and the Sky had a -4.8 net rating with her on the court and a 6.8 net rating when she was off the court. She is a very good athlete, and still 25 years old, but even if she improves greatly in her fifth and sixth WNBA seasons, how much of an impact will she really have playing fewer than 20 minutes per game?

Probably the most important takeaway from the Sky’s offseason is that they kept the band together. It is hard to imagine Courtney Vandersloot and Allie Quigley playing for another team, but bringing them back shouldn’t be taken for granted. Similarly, it is difficult to overstate the importance of keeping Stefanie Dolson.

Dolson may never make another All-Star team, but she defends the best opposing post player every single night and spaces the floor on the other end. Perhaps most importantly, Dolson appears to be the heart and soul of this team. Her teammates feed off of her energy and passion, and there is not anyone on this roster who can replace that, though Sydney Colson certainly provides value in that area as well.

The Sky have the eighth pick in the WNBA draft, and there is no guarantee that whoever they pick will even make the team. Chicago’s biggest need is probably a backup wing, though they could elect for another big since Jantel Lavender and Cheyenne Parker are both free agents after the 2020 season. A backup point guard could make sense as well, though Diamond DeShields is the de facto point guard when Courtney Vandersloot sits. The Sky could also try to trade the pick, especially if a team like Indiana, Minnesota or New York is looking to add another young player.

This lineup may look familiar, as it was Chicago’s starting lineup for most of last season. The only possible change James Wade might make is at power forward, where Cheyenne Parker and Azura Stevens are both strong starting options. Lavender averaged 26.9 mpg last season, her most since 2015 and that workload may have contributed to the season-ending injury she suffered in August.

Lavender is 31, and at this point in her career, it might make sense for her to go back to playing fewer than 20 minutes per game as she did in her last three seasons in Los Angeles. The best result for Chicago would be for Azura Stevens to emerge like Astou Ndour did last season, with Parker and Lavender coming off the bench. The most likely outcome is probably for all three to play 20ish minutes, to the point where it almost doesn’t matter which one is starting.

As much as I may dislike some of the Sky’s off-season moves, it may not matter much for 2020.

You could argue this season (and the future, to a lesser extent) was always going to hinge on the development of Diamond DeShields. Diamond is probably the most athletic player in the WNBA, and at times last season, she looked like a future MVP candidate. It may be asking a lot for her to make First Team All-WNBA this season, especially since Courtney Vandersloot will continue to have the ball in her hands quite a bit, but I have no doubt the potential is there. With the roster almost entirely the same from last season’s fifth-place team, the only clear path into the upper echelon of the league is for DeShields (or Gabby Williams or Azura Stevens) to take a big leap forward.

The Sky have 20/1 championship odds, which is probably about right. They finished fifth in the WNBA last season, and were a miracle shot (and a blown call) away from advancing to the WNBA semifinals. Even so, they never really felt like serious title contenders. They improved greatly in their first season under head coach James Wade, and if you believe in Wade, a 20/1 championship bet might make some sense.

I’m not sure I believe in Wade, especially as a GM, but I do believe in Diamond DeShields. Is there a five percent chance Diamond DeShields is the best wing player in the league this season and she carries her team to the championship? I could see that. There are a couple of other bets I like better, especially since we don’t yet know how the draft will shake out, but I won’t rule out a championship bet on the Sky.

For the most part, we know exactly what to expect for fantasy from the Sky. Vandersloot, Quigley and Dolson are veterans who probably won’t improve much but are young enough that we shouldn’t expect much of a drop off either. I think at the very least we can expect Diamond DeShields to match her 29.3 fppg from 2019, but she has plenty of room for growth in her third season. If you are looking for fantasy upside from this team early on, Diamond is your best bet.

As we mentioned in regard to the starting five, the only part of this team that could be up for grabs is the frontcourt rotation. We would obviously like one of Jantel Lavender, Cheyenne Parker or Azura Steven to get starter’s minutes next to Stefanie Dolson, but that doesn’t seem particularly likely.

Lavender is a better real-life player than a fantasy player, as she averaged 21.2 fantasy points in 26.9 minutes per game last season. I can’t see playing her much for fantasy even if she plays the exact same role next season.

Cheyenne Parker was a GPP play nearly every time out last season. She was always capable of putting up a double-double even in limited minutes, but it was nearly impossible to predict when. I’m not sure how much would change even if she got 25+ minutes. She’d still be a GPP play, just with a higher ceiling and, before long, a higher price.

The rest of the rotation figures to be Gabby Williams at backup small forward, Kahleah Copper at backup guard and possibly Sydney Colson at backup point guard. Copper and Williams would likely both play heavy minutes if DeShields, Vandersloot or Quigley were to go down with an injury, though we shouldn’t expect them to have particularly high usage rates, even as starters.