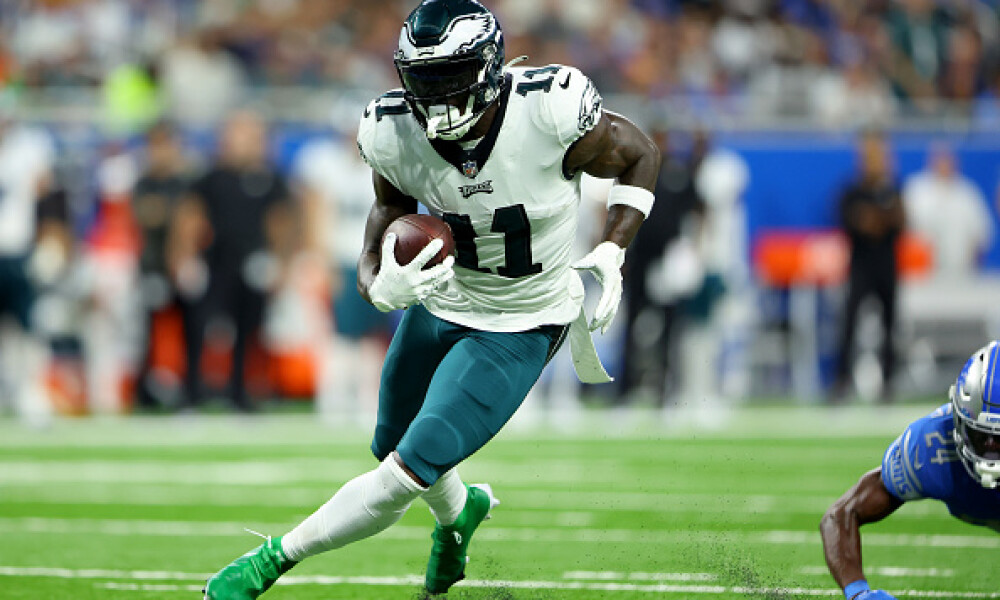 Week 2 of the 2022 NFL season is in the books, and it’s on to look at Week 3. Wide receiver has been quite productive to say the least, and it’s important to absolutely nail this position, especially in DFS. If running backs are going to continue to underwhelm, it might be best to nab multiple stud receivers to anchor your lineup. The tough part this week is going to be deciding on which receivers to play. Without giving too much away, my favorite wide receiver on the slate is Minnesota’s Justin Jefferson. Of course, you can’t play all stud receivers that are the most pricy, so I was sure to include ample value receivers, as well as a couple of dart throws. Be sure to check out all of our other great positional coaches, as well as the Week 3 DFS watch list. Here are my favorite DFS options at wide receiver for your Week 3 NFL DFS lineups, including my top receivers, best value plays, and receiver to fade.

Justin Jefferson, MIN - Teams score against Detroit, that’s what happens. The Eagles put up 38 in Week 1, and Carson Wentz and the Commanders put up 27 points last week. Kirk Cousins and the Vikings sucked on Monday night, sure, but this is a smash spot for Jefferson, and a great bounce back opportunity for Kirk Cousins. The game isn’t on primetime, so that’s good for Cousins, and in four career games against the Lions, Jefferson has averaged 7.5 receptions on 9.5 targets for 125.8 yards per game! Detroit plays at a fast pace in neutral situations, and they rank 22nd in DVOA against the opposing WR1. Don’t overthink it with Jefferson, as this secondary doesn’t even come close to what he and Minnesota faced on Monday night.

A.J. Brown, PHI - This pass defense stinks. They have allowed the sixth-most fantasy points per game to receivers thus far in 2022, and Brown is the alpha in the Philadelphia passing attack. Washington has been a bit tougher on tight ends, and when you look at Brown, he has at least eight targets in each of the team’s first two games. This Washington defense just has the look of a defense that cannot contain Brown, and last year, Hurts completed 71.2 percent of his passes against Washington.

Stefon Diggs, BUF - I honestly don’t know what to say about Diggs that hasn’t already been said. He commands a massive target share and is averaging a cool 135 receiving yards per game this season. The hope here is that Miami can keep this game close and we get a shootout, because I've been largely unimpressed by Xavien Howard here in the early going of the 2022 season. Miami ranks in the bottom-five in DVOA against the pass through two weeks of the season, so it goes without saying that you can throw it on the Dolphins. Well, that’s what Buffalo does well, and the Josh Allen to Stefon Diggs is connection is one of the top two or three QB-WR duos in all football, and honestly, they may not be #2 or #3.

Cooper Kupp, LAR - No analysis needed. He’s good. He gets peppered with targets. The Arizona secondary stinks. At this point, I don’t know if there’s a price point where I wouldn’t play Kupp.

Tee Higgins, CIN - The Jets rank 31st in the league in DVOA against the WR2 this season, and when you look at Higgins compared to Chase this season, Higgins has a higher aDOT and Joe Burrow has a higher passer rating when targeting Higgins. While D.J. Reed grades out well per PFF’s metrics, Higgins’ size is going to be a problem for Reed and the Jets.

Even when lined up against Ahmad “Sauce” Gardner, Higgins still has four inches on the rookie.

Brandin Cooks, HOU - When you look at the numbers, it doesn’t appear that Chicago has given up a ton to wide receivers. However, look at their first two games, where they played San Francisco in a monsoon and Green Bay has no proven target outside of Allen Lazard, who was making his 2022 season debut in this contest. Don’t give me that Sammy Watkins nonsense, because Week 1 has passed. Cooks is commanding a massive target share and Chicago ranks in the bottom-six in the NFL in DVOA against the deep pass. Cooks has a 1.79 yards per route run mark through the first two games, per Pro Football Focus, so if there was ever a time for Pep Hamilton to let Davis Mills throw the ball downfield, it will be against this Chicago team that ranks in the lower-third in terms of overall pass rush grade, per PFF.

DeVonta Smith, PHI - Washington has been generous to all receivers this year if we are being honest, as mentioned in A.J. Brown’s write up above, but they rank 21st in DVOA against the WR2, and when looking at the Philadelphia receivers, guess who gets the most work out of the slot? It’s DeVonta Smith. If you haven’t heard of Washington’s woes in slot coverage this year, it’s time for you to pay attention. Jalen Hurts has a 116.7 passer rating when targeting Smith in the slot this year, and slot receivers against Washington appear to be cheat codes for DFS purposes.

Nelson Agholor, NE - After a quieter Week 1, Agholor came onto the scene in Week 2, catching all six of his targets for 110 yards and a score. DeVante Parker has yet to find his footing in this offense, and with Kendrick Bourne only logging 26 snaps through the first two weeks, Agholor seems to be the WR2 for this team, at least for this week.  Baltimore ranks 31st in DVOA against deep passes this year, and there could be some added work for Agholor in the passing game with Jakobi Meyers not expected to play in this contest.

Drake London, ATL - Drake London is a talented receiver, don’t get me wrong, so what I’m about to say is not an indictment of London or an insensible rationalization of his performance thus far. However, if teams are going to double-team Kyle Pitts on every play, London is going to continue to ball out! In PPR formats, he has double-digit points in each of the first two games of the season, with at least five grabs for 74 yards in each game. He got some red zone looks last week, and Seattle ranks 29th in DVOA against the opposition’s WR1.

Chris Olave, NO - Guess who leads the league in average targeted air yards, per Next Gen Stats? It’s Olave, you got it! He has nearly 44 percent of the team’s total air yards, and before you hit me with Carolina hasn’t allowed a ton of fantasy points to receivers this year, please go look at who they played. The Panthers have faced Jacoby Brissett and Daniel Jones so far in 2022, so Jameis Winston and his trio of receivers will be their first true test in the passing attack. Winston has at least 34 passing attempts in both games this season, and Olave is coming off a game where he got 13 targets and well over 300 air yards! He’s a big play waiting to happen, and the Carolina secondary will struggle to stay in line with Olave.

Elijah Moore, NYJ - Garrett Wilson is a great talent and he’s coming off a monster game, but at some point, Moore is going to have his time in the sun. The Bengals have been tough on opposing WR1’s this season, but far more generous to WR2’s. Moore should see Eli Apple more frequently than Wilson, and Cincy’s slot corner, Mike Hilton, has allowed a 76.8 passer rating when targeted, per PFF. It’s not that I’m out on Wilson this week, but I’ll save some money with Moore in a more advantageous matchup.

Terry McLaurin and Jahan Dotson, WAS - Dotson has been great here in the early going of the season, but this Philadelphia secondary is no joke. There are far better options at their respective price points, and by taking one of these two, you are just trying to get cute, and honestly, for very minimal positive reasons. The Eagles have allowed just two receiving scores to wideouts this season, not to mention the ninth-fewest receiving yards to the position.