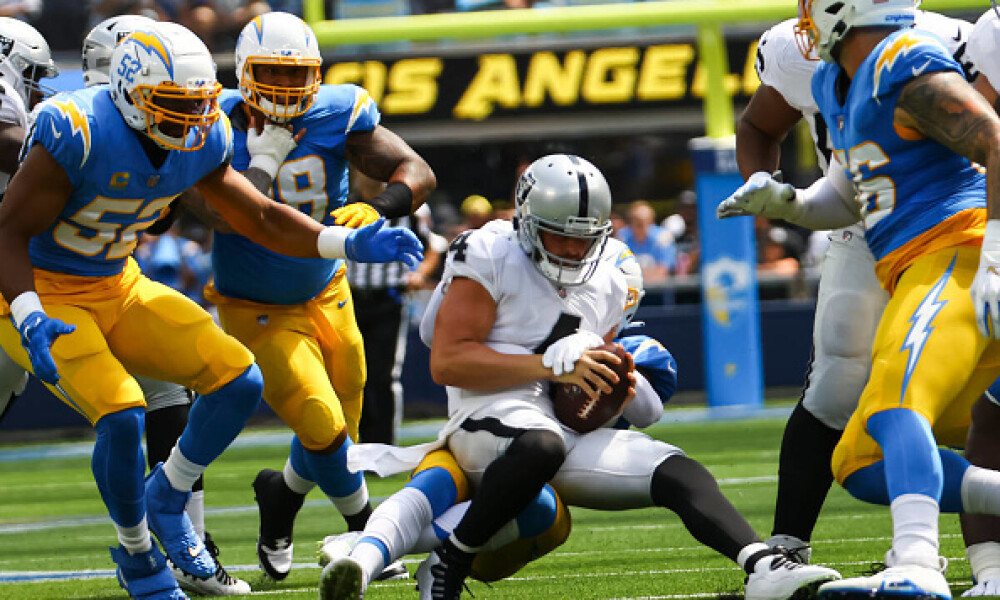 And just like that we find ourselves preparing for Week 3 of the NFL season. Week 2 was a bit frustrating across the board, especially if you’re like me and played Trey Lance in Cash games along with a couple other running backs that didn’t pay off. The Bengals at $2,200 didn’t necessarily hit “value” but they were so heavily owned that they didn’t keep anyone from struggling to cash. This week we have a very interesting slate with DraftKings making it difficult to truly pay down at this position. The matchups for the cheapest defenses leave much to be desired. But we have you covered with all the NFL DFS picks for this weekend’s slate. Don’t miss this week’s NFL DFS Podcast and NFL DFS Watch List which dropped Wednesday. Let’s dive into this week’s NFL DFS picks for the D/ST slot.

The Chargers opened as 10.5-point favorites against the Jaguars, easily the largest favorite on Sunday’s main slate. They were quickly bet down to seven-point favorites and the over/under has been bet down to roughly 47.5 points. That’s still high and the Jaguars could certainly put up garbage time production. However, the Chargers have a ton of talent on the defensive side of the ball, enough to give Trevor Lawrence and the Jags fits. This is also quite the road trip for Jacksonville traveling across country. It won’t be a huge disadvantage, and the Chargers don’t generate the greatest home field advantage in SoFi Stadium. As the sixth-most expensive D/ST on the board on FanDuel, the Bolts could be a worthy spend up option, but don’t force them in on either site if you’re looking to plug in more studs at the positional slots.

The Bills defense is showing us that they could arguably be the most expensive D/ST each week. I’m well aware of the Dolphins hanging 40+ points on Baltimore last week, but the Ravens secondary was a little beat up in that matchup. I’m very interested in the Bills as just the fifth-most expensive D/ST and last week’s offensive showcase by the Dolphins may keep some people off Buffalo. The fact that they’ll possibly be without Dane Jackson is a bit concerning and I’m not going to take the Dolphins offense for granted. But the Bills have allowed just 17 points and 430 yards of offense to the Rams and Titans through two games. They’ve also forced seven turnovers and nine sacks. I don’t like them enough for Cash games, but I think there’s GPP appeal here assuming there’s low ownership and casual players are scared away by the Vegas numbers.

I couldn’t believe DraftKings priced the Bucs at just $3,100 for a home matchup against the Packers. They must know something we don’t, right? The first two weeks, the Bucs were priced at $3,300 for road matchups against Dallas and New Orleans. The Bucs allowed a total of 552 yards of offense in both games and just 13 points. They’ve also collected ten sacks and forced six turnovers while returning a total of 39 points in DFS. So now they’re priced down with the Packers coming to town? Aaron Rodgers has just 429 passing yards through two games with two touchdowns and three turnovers. The pass catchers haven’t been too reliable to start for Green Bay and if they plan on leaning on the running game, well the Bucs have allowed just 173 yards on the ground so that could be difficult too. The betting movement has seen this over/under bet down to the low 40’s after opening over 50 points. The Bucs are a bit too expensive on FanDuel at $4,700 but for $3,100 on DraftKings they’re in play in all formats.

I’d hate to be the team that’s in Baltimore’s path after they blew a lead to Miami last week. Unfortunately that team just so happens to be my beloved Patriots. Baltimore was a fade last week and while I stand by the call, they were saved by an early kickoff return for a touchdown. The over/under is around 43.5 points and the Ravens are surprisingly favored by only a field goal. With that said, the Patriots offense is still struggling. They’ve scored just 24 points through two games and they’ve relied mostly on their defense to remain competitive. The reports in training camp were that New England’s offensive line was really struggling but they’ve only allowed two sacks so far. But the offense has turned it over four times and as mentioned already, they can’t put up points. We will need to monitor the practice reports ahead of this matchup. Marcus Peters and Marlon Humphrey missed Wednesday’s media portion of practice, but if they’re good to go and the defense doesn’t see too many inactives come Sunday then they should help us have a profitable day on Sunday as the matchup may provide a pretty good floor.

I don’t have much interest in Seattle on DraftKings, but on FanDuel where they’re the fifth-cheapest D/ST on the slate, I think we can talk ourselves into them. Remember, this is a pretty exhausting road trip for Atlanta. They traveled across country to Los Angeles where they gave the Rams a good effort last week, and now visit the Seahawks in Week 3. Marcus Mariota has turned the ball over four times in two games and hasn’t lit up opposing defenses through the air. Are the Seahawks the worst defense they’ve faced so far? Yes. But Seattle flaunts one of the best home-field advantages in the NFL. They opened as four-point favorites although the line is slowly shifting to a pick ‘em, but the over/under is sitting around 42 points. I can imagine a scenario where that gets bet up a bit, but as a salary saver on FanDuel, they might be a decent option in that game, but we can look closer at this one later in the week.

The value tier this week is very difficult to read. It’s one of those weeks where I’m likely settling on the Bucs D/ST for Cash games or maybe even paying up a little bit more. There’s an argument to be made about playing the New York Jets ($2,400) against the Bengals, who have struggled on offense. Or you could go way down to the Detroit Lions ($2,200) and just hope for five or six points. All the value defenses on DraftKings are playing above average offenses. Will one of them surprise us and show up a bit? Sure. But I’m looking at the Houston Texans as the cheapest D/ST I might target on DraftKings, while Seattle is in play on FanDuel. This game opened with a projected low scoring total, and that hasn’t really changed since Monday. The Texans are also underdogs on the road, but only by a field goal. The Bears have only scored 29 points in their first two games and while the Texans are likely the easiest defense they’ve faced so far, Houston has still forced three turnovers and five sacks while allowing just 36 points through two games. I definitely wish they were a little bit cheaper because even $2,600 feels a little too expensive for DFS, but I think there’s potential to surprise in this matchup.

I wasn't too excited about the Jaguars heading West against the Chargers. However, there is a growing chance that Justin Herbert sits out Sunday's matchup. This line opened at -10.5 in favor of the Chargers and it's now sitting at -3.5 and the Over/Under is anywhere from 42.5 to 44.5 depending on the book you're looking at. If Herbert does sit, then Chase Daniel steps in at quarterback. He's an okay backup, but still has only eight career touchdown passes, but has enough weapons to not completely screw the pooch in this matchup. The Jaguars won't become a slam dunk, but they do become the most appealing salary saver should Herbert miss this game.

It’s pretty simple, I just don’t believe they can pay off this price tag on both sites. On DraftKings, they were priced at $2,200 and $2,600 for their first two matchups and now they’re up to $3,800? As the second-most expensive D/ST on both platforms, I just don’t get it. The matchup is okay and the Vegas odds are what we like to see. But they’re about $1,000 too expensive on both sites. The Bears do generate plenty of pressure on opposing offensive lines and they can get to Davis Mills in this matchup. They also have a dozen tackles for loss through two games. Surprisingly, the Texans have only turned the ball over just once so far through two games and even if the game is low scoring and the Bears get three sacks, I don’t know if that’s necessarily worthwhile for DFS if they aren’t forcing turnovers. Again, if they were $1,000 cheaper I wouldn’t have a problem with this play, but I’d rather pivot to the Chiefs, Saints, Bills, or Rams who are cheaper in this range.