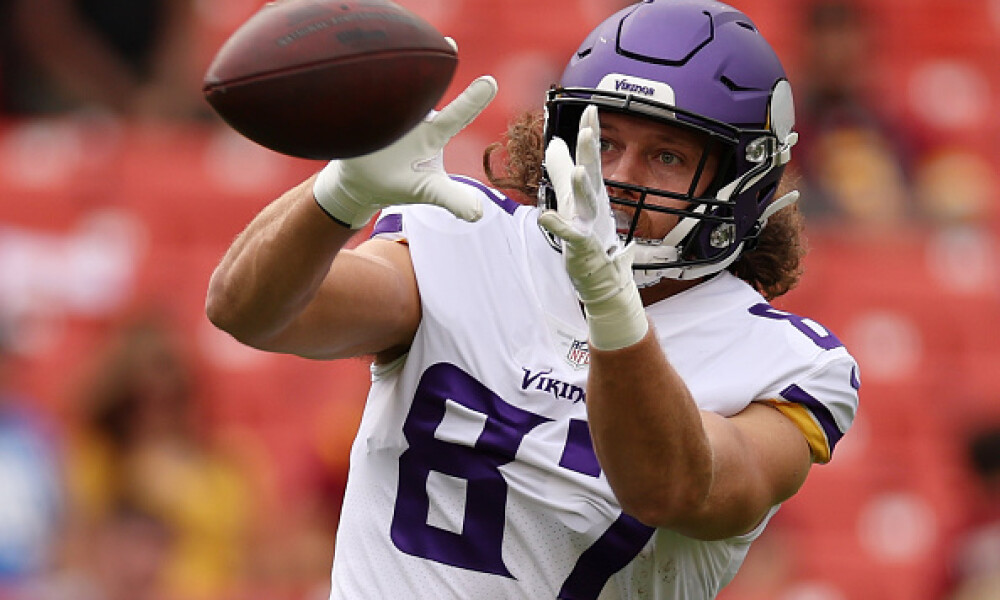 Not a bad week at all for us. We hit on at least one option at each tier with the top tier play Travis Kelce (TE2), mid-tier Dalton Schultz (TE3), and value tier Foster Moreau (TE). We also successfully faded Greg Dulcich though Cole Kmet bucked his trend of blocking on 8-9 pass plays and went off as the TE1 (can’t win 'em all). Let’s see if we can win some more this week in Week 11!

We have to move the needle a bit here with the top tier. Travis Kelce is playing on Monday Night so not available for the main slate, Dallas Goedert is on IR, Darren Waller is on IR, Zach Ertz is done for the season, and Mark Andrews is banged up. So the new “top tier” is that $4,500 to $5,000 range. And there is really only one name worth paying up for if you are going high-end - the guy who has gotten 9 and 10 targets in his two games since being traded.

Rumor is that Justin Jefferson is dealing with a bit of a toe ailment so I don’t foresee him soaking up 16 targets again. If you are going with smaller or cash lineups, Hock is about as safe as they come. He’s 10.6% - 10.8% of your budget on DraftKings and Fan Duel but only 9.5% on Yahoo so slight discount over there but not really even to change platforms over.

In the four games with Dak Prescott, Dalton Schultz is averaging ~13.5 DraftKings points per week. That would be third on a per-game basis behind only Travis Kelce and Mark Andrews. This week they get the Vikings who are 22nd against the tight end so Schultz should be a pretty solid option in the mid-range. I do not understand the Yahoo DFS pricing for Dalton Schultz. On DraftKings (8.6%) and Fan Duel (9.8%) he is appropriately priced. On Yahoo, he is only $12 which is 6%. Last week he was $10 and he smashed that, To put it in perspective, there are only six more expensive TEs on DraftKings and five more on FanDuel. On Yahoo, there are 16 TEs more expensive than Dalton Schultz. If you want to make a Schultz lineup, he’s free on Yahoo.

Cole Kmet is going to be popular this week in this price range which presents a good opportunity to pivot, especially with Kmet showing up on the injury report. Kmet might honestly end up with a decent start if he is a full go since this game with the Falcons has an over/under of nearly 50 points but we just don’t like chasing last week’s touchdowns with everyone else. Folks are going to be off The Muth after a lack of production as of late but his schedule went Eagles, bye, Saints so kind of rough sledding. In fact, the Saints are the number one defense vs. the tight end yet Mike Tomlin still saw it fitting to try to throw to Freiermuth seven times. His last three games have seen 9, 7, and 7 targets and, with Chase Claypool out of the picture, there’s no reason that shouldn’t continue in a matchup with the Bengals who are giving up double-digit DraftKings points to the tight end on average. He’s 8-9% in all three platforms so this is the mid-tier play to use on DraftKings or FanDuel.

We faded Dulcich last week but that doesn’t mean we don’t like him - we just didn’t like the spot. And we were right about that as he did only catch one pass. But he’s a converted WR and a high aDot guy so it’s not surprising that he was a couple of inches away from a long touchdown last week. This game with the Raiders should be a little more than the 27 total points last week and the Raiders are a bottom 5-6 team vs. the tight end this season. Throw in the fact that Jerry Jeudy hasn’t been practicing and this might be the play of the week at tight end. He’s over 9% on FanDuel, 8% on Yahoo, and 7.6% on DraftKings so probably a better option on the latter two.

We like to give you at least one guy that is down near the bare minimum pricing so that you can get a bit crazy with the rest of your lineup if you so choose. Logan Thomas hasn’t been producing and he’s been dealing with a rib injury but, despite that, he’s been playing pretty large snap shares as he played 61 snaps this past week and lined up at WR for 37 snaps. In this price range, you aren’t going to find many guys that line up at WR at all - it’s mostly clunky blocking dudes under $3,000 on DK. And he’s got the Texans this week so a matchup we can work with. He’s a stay-away on FanDuel as he’s over 8% of your budget but he’s about ~5.5% on DK and Yahoo so he’s the best cheap play.

This one is contingent on Brevin Jordan being a healthy scratch again but, if he is, Akins is clearly the favored tight end for pass-catching opportunities for the Texans. If you aren’t feeling Logan Thomas, Akins is a dart throw in this same game. Just know he’s likely going to split snaps with OJ Howard to a certain degree even if Brevin is inactive and the Commanders are a tough matchup so this is a true TD-chasing play. But he’s pretty much free.

It can be exciting when the starter gets hurt and the “next man up” is exciting like Isaiah Likely and Trey McBride this year or Pat Freiermuth last year. This isn’t one of those times. Jack Stoll has appeared in 26 games and he’s played more than 40% of the snaps in 11 of those. These are his best performances based on DraftKings scoring: 3.1, 2.6, 2.3, 2.1, and 1.9. Yikes. Remember when Zach Ertz was the starter and Dallas Goedert was in the “Jack Stoll” role? It looked a bit better than that. The only interesting Eagles tight end with Goedert out is converted QB Tyree Jackson but we have no idea if/when he will play. So just avoid them for now.

This is going to be an incredibly popular play. The casual gamer is going to look at the Cooper Kupp injury and say “ball has to go somewhere right?”. They won’t look at the fact that Higbee is not particularly fast or elusive which does not pair well with his 3.3 yard aDot which ranks 93rd among 112 qualifying tight ends. They also won’t look at his matchup with the Saints who have yet to allow a tight end to score more than 10 DraftKings points all season. The best game against them was Isaiah Likely catching one of five targets (and that catch just happened to be a touchdown). This week you let everyone else get smoked by Higbee.