NFL DFS D/ST Coach Week 11: The Ravens With a Great Matchup at Home Against the Panthers 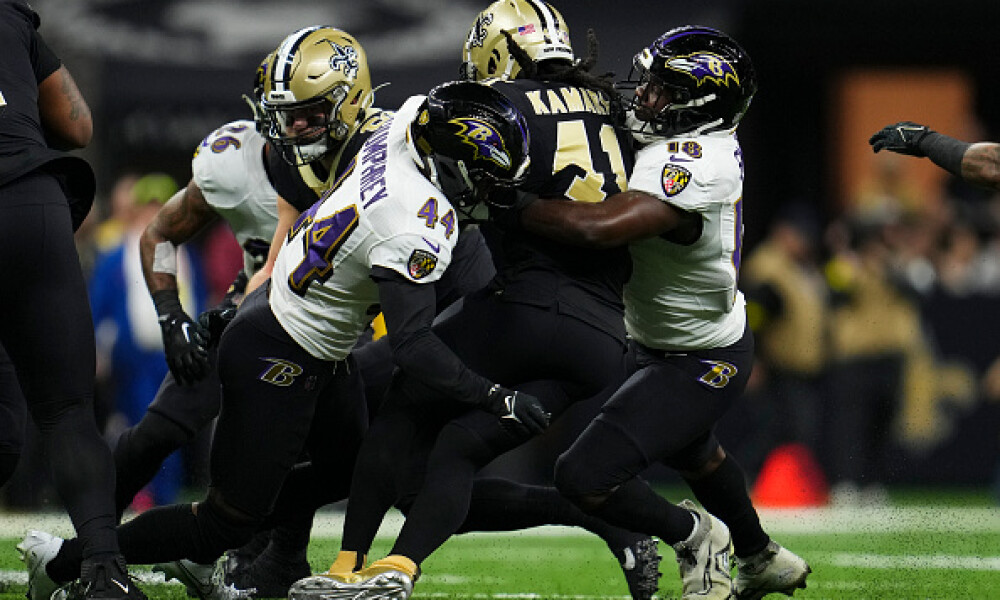 Last week was great for some lower-priced D/ST’s from this article. If you stayed on top of my updates through the weekend, I was a little less bullish on the Vikings once we knew Josh Allen would start but they still put up 15 points. Now with the benefit of hindsight, the late touchdown they scored was basically an eight-point swing. Ten if you consider the game flow that also allowed them to get an additional turnover off Josh Allen in overtime. If the Bills somehow get out of their own end zone and win the game in regulation without much controversy, then Minnesota likely only puts up five points in DFS.

But now we turn our attention to Week 11 and it’s shaping up to be a fairly low scoring week for fantasy. If you’ve recently checked out our NFL Vegas Odds page, there are plenty of low totals across the board. That’s great when searching for a D/ST to play but not ideal for offensive players we’re hoping to pop off. Additionally, the DFS sites (DraftKings and FanDuel) have really tightened up player salaries this week, so I’m of the mindset that it’s more important than ever to save salary at the D/ST position if you need to. There are decently priced options available to us that can pop off and break the slate. Here are the NFL DFS D/ST Top Plays for Week 11.

The only bad thing I can say about the Eagles is that it’s a short week for them. But they got a reality check and were punched in the mouth by the Washington Commanders on Monday night. It was a great first quarter for the Birds, but it got ugly after that. But the Eagles still have multiple turnovers forced in four straight games and I think they’re pretty pissed off after Monday’s loss. Now they play the Colts, who got a win against the Raiders last weekend (whoop dee doo), but the offense is still suspect against stronger defenses. With Matt Ryan under center, we’ll have more opportunities for sacks since he tends to remain in the pocket and take a beating. The Eagles are favored by a touchdown and the over/under is relatively high for the main slate (in comparison to the other games available) at 44 points.

Just follow Vegas here. There are low projected totals across the Week 11 slate and this one is no different at just 41.5 points, but the Ravens are heavy 13-point favorites. Heading into their bye week, the Ravens had at least three sacks in five straight games. They’re tough to run on and their pass defense is stingy as well. Let’s not forgot, they’re fresh off their bye week and Roquan Smith now has a full week of prep and rest for this game after he was acquired by Baltimore ahead of the NFL Trade Deadline. The Panthers will be starting Baker Mayfield at quarterback this weekend and he was horrendous earlier in the year as the team’s starter. I don’t expect that to change this week especially with Carolina being on the road.

I have no quandaries getting exposure to this defense even though it’s a short week, although they do strike me as more of a tournament play. They got a crucial defensive touchdown late in Monday’s game to really shakeup Showdown contests, but overall they put up a good showing against a divisional rival. Can they do the same against the lowly Houston Texans? Yes, but I won’t be forcing them in. I’ll play them if the salary is there. Chase Young is expected to be activated for this game and that’s a huge piece for this defense and they’re pass rush. He drastically improves the pass rush which means more volume in terms of sacks and potentially turnovers. The Commanders are favored by roughly a field goal and the over/under is pretty low at 40.5 points. I won’t argue with anyone worried about the short week, but I think there’s plenty of upside here for tournaments.

For the record, I never feel good about playing the Saints D/ST in season-long or daily fantasy. Throughout the years the consensus has been that they’re a better defense for actual football, not fantasy. And I still believe that could be the case this weekend. The Rams offense is in shambles and they’ll be without Cooper Kupp, who was placed on IR earlier in the week. Even with Kupp, the Rams offense has been very friendly to opposing defenses and I’m a little surprised DraftKings and FanDuel didn’t price the Saints up a little more. Could this be a trap? Potentially. But the Saints are at home, where they’ve performed a little bit better than on the road, and they’re favored by roughly a field goal with one of the lowest projected game totals on the slate (39 points). Matthew Stafford will likely return this week and there are still cheaper options we can go to, but there’s a fair safety net here and the pricing is reasonable.

The Jets are one of my favorite plays this week on DraftKings. Both the Patriots and Jets are coming off their Bye week, but the latter will be the visitors in New England this week. We saw these teams plays just three weeks ago with New England getting the edge. It was still a good performance on the defensive side by both squads, but I’ll take the Jets on DraftKings this weekend. It’s a little tough to be play either defense on FanDuel since they’re both priced up, but at $2,800 on DraftKings I love this squad and they’re elite secondary. The Jets are establishing a pretty good floor for fantasy. They’ve returned at least seven fantasy points in six straight games with 21 sacks in that span and they’re not bleeding too many points to opposing offenses. The Patriots are favored by a field goal, but the game total is around 38 points. I think Robert Saleh will have this crew highly motivated especially after they went into their Bye week with a win against the Bills, and I’m optimistic we see more of a “ceiling” game from Buffalo this week.

This will be entirely dependent on the weather. If you’re playing the Browns you absolutely want the ugliest weather imaginable. We’re looking at potentially 30+ inches of snow being dumped on Buffalo, but most of that will be on Friday and Saturday. But if the lake effect does linger into Sunday it’ll have an impact on this game. I’m not counting on heavy snow during this game. However, winds are projected to be around 20-30mph during this game and obviously it’ll be cold. Both these teams are used to colder conditions, but the winds could impact the aerial attack for Buffalo and we could see run-heavy schemes. The Bills are favored by about eight points, but the total is low at about 41-42 projected points. In five of their last six games the Browns have posted five or fewer fantasy points with two goose eggs and a negative performance baked in there as well. I normally don’t like playing bad defenses but given the conditions this game will be played in, I don’t hate considering the Browns this weekend especially on FanDuel where they’re the cheapest option on the board. Update: I'm less optimistic of this DFS play now since the NFL is moving this game from Buffalo to Detroit. If you need the salary relief on FanDuel then it's a bold move to go this cheap. It's just hard to justify playing the Browns D/ST in a controlled environment.

Position of variance. I say it every week and should be part of a drinking game at this point. The Steelers aren’t great and the Bengals are coming off a Bye. However, it’s a divisional game and the Steelers are at home where they’ve given up 17.3 points per game this year (compared to 26.4 on the road) and 303.5 yards per game (compared to 426.6 on the road). T.J. Watt is back and the Bengals are still without Ja’Marr Chase. I do think the Bengals want to avenge the embarrassing loss to the Steelers from Week 1, and they’ll be well rested. But as we saw on Monday night with the Commanders and Eagles, anything can happen in these divisional games and the Bengals are only four-point favorites with a projected total of 41 points. The Steelers are probably my preferred pay-down option on DraftKings.

I want absolutely nothing to do with this game from a defensive perspective. Just trust Vegas here and the way this game likely plays out. Neither defense is particularly good and I don’t understand why the Falcons are priced as a respectable mid-tier option on DraftKings. On a slate with so many games featuring low totals, this one is sitting at 49 points. We just hit on so many defenses across the pricing spectrum expecting lower totals, so why even entertain one from this game? I’m not going to play the Falcons given that Justin Fields has 325 rushing yards in his last two games alone. And I won’t be playing the Bears simply because we don’t need exposure to a bad defense this week as the Falcons could run heavily with Cordarrelle Patterson. Get DFS exposure to this game on the offensive side of the ball and leave both of these defenses out of your player pool.