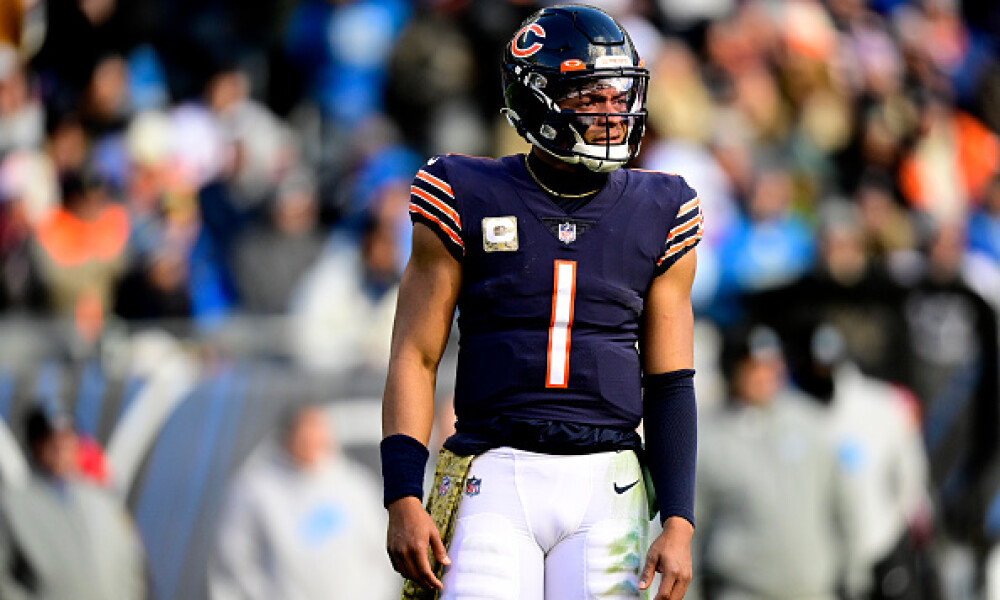 Week 11 of the NFL season is here. In Week 11 we see the Dolphins, Buccaneers, Seahawks and Jaguars on their bye week which means no Tua Tagovailoa, Geno Smith, Tom Brady or Trevor Lawrence for our Sunday DFS lineups this week. We also see Patrick Mahomes, Justin Herbert, Kyler Murray, Aaron Rodgers, Jimmy Garoppolo and Ryan Tannehill playing in the Thursday, Sunday and Monday night football games. .

He isn't the most expensive player on the slate but it's hard to go against a guy who has dropped back-to-back 40+ fantasy point performances and now gets to face the Atlanta Falcons. Fields has rushed for 325 yards and three touchdowns over the past two weeks. Yes, RUSHED for 325 yards and three touchdowns while adding 190 yards and five passing touchdowns to go along with it. The Falcons defense is one of the worst in football but even a good defense would likely struggle to contain Fields right now with the way he is going.

Might as well stick with the trend of mobile QB's here. Hurts is certainly capable of a 100-yard rushing game but hasn't been as much of a threat on the ground of late as he was at the beginning of the season. That hasn't really stopped him from being a productive fantasy QB however as he has finished with at least 20 fantasy points in four of the last five games, including three straight contests.  The Colts just lost their best linebacker in Shaq Leonard for the season which will stress their defense while they look to contain Hurts this weekend.

The elbow certainly looked OK last week against the Vikings as he threw for 330 yards with one touchdown and two interceptions while adding 84 yards rushing. That said, WATCH THE WEATHER because there could be some heavy snowfall in Buffalo this weekend that could make throwing the football tough. Allen has an elite matchup if there isn't a blizzard however against the Cleveland Browns.

Dak has looked strong over the past two weeks , going for 26 and 21 fantasy points against the Bears and Packers. This week he draws a Vikings pass defense that has struggled against opposing QB's this season and that had just allowed 330-yards passing to Josh Allen last week. Prescott and CeeDee Lamb are really connecting right now and sooner or later Michael Gallup will be making some big plays for this offense as well.

Bengals are fresh off a bye and will be facing a Steelers secondary that could once again be without Minka Fitzpatrick. Recent production from Burrow has been a bit mediocre and the loss of Ja'Marr Chase could certainly be a contributing factor but I like this team coming out of the bye week and feel that Higgins and Boyd are talented enough to get Burrow over that 20-point threshold.

This game has the makings of a good one for DFS. We are looking at a 47.5 game total with just a 1.5-point spread. Cousins went for 20 FP against the Bills last weekend and the addition of T.J. Hockenson adds yet another big time pass catching option for Cousins to throw the football too. Of course, he also has Justin Jefferson who is an absolute stud.

According to Albert Einstein, The definition of insanity is doing the same thing over and over again and expecting a different result. With that said, I guess I am insane because I am once again willing to go back to the Russell Wilson well. Why is that? Because I just don't think anybody else will. If playing multiple lineups it makes sense to use Wilson with Courtland Sutton this weekend against a Raiders defense that is just awful. Maybe this is the week?

While a lot of attention is going to be put on the QB opposite of Mariota in this game, let's not forget he too can put opposing defenses in a panic with his ability to run the football. Mariota has been inconsistent at best this season but he did go for 18.74 FP against the Panthers last weekend and had two games of 24 FP in the last six which shows the type of ceiling he can provide.

Potentially getting Mark Andrews back would be great for his value but Jackson just hasn't been producing at a level worth the price tag.  Even though the matchup against the Panthers is certainly a favorable one, why spend the extra money when Justin Fields and Jalen Hurts have as much upside and are cheaper plays?