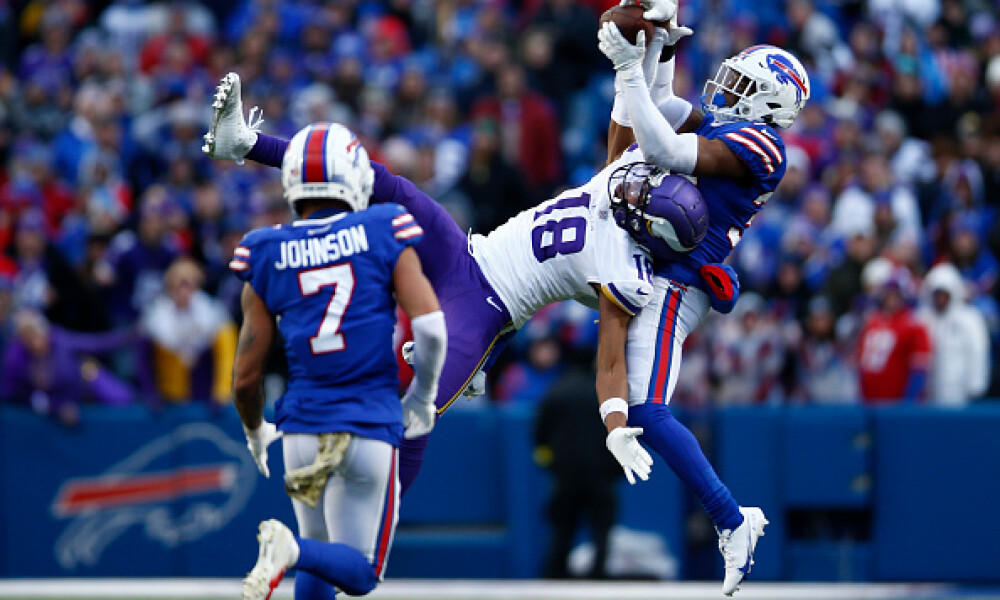 Week 11 of the NFL season is upon us and we have yet another strong week for wide receiver matchups to target. Last week it was a low-rostered Justin Jefferson, CeeDee Lamb, Christian Kirk and value plays like Donovan Peoples-Jones coming through. Let's take a look at some of the top plays, values, and fades at the wide receiver position for your DFS lineups this week.

He is the top-priced wide receiver on DraftKings and the second-highest-priced receiver over on FanDuel. Jefferson has gone for 100+ yards in six of the nine games played this season. He's found the end zone in back-to-back games and is coming off a ridiculous 193-yard performance against the Bills in Week 10. He has four games this season with at least 147 yards and two games with over 180 yards. His matchup this week will likely be with Trevon Diggs and while Diggs is a great corner he also gives up a ton of big plays.

I mean, he's really all they got right now in Las Vegas and Carr has seemingly figured that out as well with Adams being targeted 31 times over the past two weeks. Of those 31 targets, he has 19 catches for 172 yards and three touchdowns. The Broncos secondary is pretty good but Adams is one of the elite receivers in the NFL and if he is going to be getting 15 targets a game moving forward then it's only a matter of time before he breaks one here against Denver.

I can see stacking Jefferson and Lamb being a popular play this week. The Vikings secondary is pretty bad and Lamb is coming off a monster game as well against the Packers where he finished with 11 catches on 15 targets for 150 yards and two touchdowns. In the three games since Prescott's return, Lamb has 20 catches on 28 targets for 297 yards and three touchdowns.

If this game stays being played in Buffalo then I'm out on Diggs this week but IF this game gets moved then I think we have to really consider him. He gave us yet another stud performance in Week 10, catching 12 passes for 128 yards. He has seven touchdowns on the season so he has that 30+ point ceiling which is what you need when spending up at wide receiver..

If you haven't noticed yet the Raiders defense is an absolute dumpster fire and while the Broncos offense is also no great shakes I do think Sutton is a pretty viable option this week. Sutton finished with six catches on 11 targets for 66 yards against the Titans in Week 10. With Jerry Jeudy likely out of the lineup this week there will be a big target share for Sutton in this matchup. The Broncos offense has to score points at some point right?

For the sake of McLaurin let us hope that Taylor Heinicke will once again start for the Commanders this week. Heniekcie has been locked in on McLaurin since taking over for the injured Carson Wentz and we've now seen two games of over 100-yards from McLaurin over the last three weeks while totaling 19 receptions on 27 targets.

Is it finally his time? Cooper Kupp is now on IR with his ankle injury which puts Robinson in as the WR1 in this Rams offense. The Rams are also expected to have Matthew Stafford back for this game after he missed last week with a concussion. The price is right, let's hope the targets are there.

The game everyone is going to stack and Mooney is still VERY cheap. Sure, at some point Chase Claypool will get going and yes Cole Kmet is the one scoring touchdowns but Mooney is still providing steady week-to-week production and is a big-play guy at a great price.

The Patriots are at home off a bye week. These are usually spots that Bill Belichick and his team will dominate. We just saw Meyers in this same matchup two weeks ago and he finished with nine catches on 13 targets for 60 yards and a touchdown for 21 DK points. He is going to get volume and is actually scoring touchdowns this season which is great for his fantasy appeal. Likely, better in cash games.

We always said that Daniel Jones and Darius Slayton have shown great chemistry but it seemed like the Giants were always looking to push him down the depth chart. The best way to work your way up the depth chart is to make big plays and Slayton is doing that. He has given us double-digit fantasy points in four of the last five games. He has scored touchdowns in two of the last three. He has an elite matchup here against the Lions this weekend.

If you've seen the weather reports then you know that Buffalo is expected to get anywhere from 3-to-6 feet of snow this weekend. So, why am I recommending DPJ? Well, that's because I don't think this game is going to be played in Buffalo. The last time Buffalo had a blizzard that impacted their home game the NFL moved the game to Detroit. The Lions happen to be on the road this week and if it's going to be snowing that much we could see this game moved inside, to a dome. So, assuming that happens, we have to be loving DPJ here against a Bills defense that has been leaky of late. DPJ has been a great value play for the past few weeks and as long as David Njoku remains out of the lineup the target share will be there.

Van Jefferson has an opportunity to step into a bigger role in the Rams passing offense with Cooper Kupp now on IR. He caught all three of his targets last week for 27 yards and a touchdown. Sean McVey has long said he liked Van Jefferson because of his ability to fill different spots in the Rams WR rotation which means we could see Jefferson from the slot which would be a nice boost to his value.

Parker is expected to return this week to the Patriots lineup after getting hurt in this matchup against the Jets back in Week 8. Prior to the injury, we had gotten some decent fantasy production out of Parker, averaging double-digit fantasy points in four of the prior five games.

If Allen Robinson or Van Jefferson is not your cup of tea this week then maybe Skowronek is. He saw seven targets last week, catching just two passes for 14 yards. We've seen Skowronek be relatively productive with Matthew Stafford under center this season and he is the cheapest of the Rams receivers this week.

Both AJ Brown and DeVonta Smith are listed as questionable after limited practice participation on Wednesday. Watkins caught four passes against the Commanders in Week 10 and is a big play threat in this Eagles offense. If either player was to miss time Watkins is a GPP flier this week.

The state of the Broncos wide receiver group is pretty rough. Jerry Jeudy is questionable to play this week. Kendal Hinton is also not practicing and KJ Hamler has already been ruled out. Virgil caught a 66-yard touchdown on his lone target last week on a busted play by the defense but by default, he could find himself starting opposite Courtland Sutton this week because the Broncos just don't have anyone else on their roster that is healthy.

I'm going to lump in both Tyler Boyd and Tee Higgins into this one section. It's not that I don't think either can find success in this matchup but the Steelers are at home and they got TJ Watt back. The Bengals offensive line is still bad and Watt is a big-time disruptor. We've also seen the numbers for Joe Burrow drop since Ja'Marr Chase has been out. I can see the Bengals again leaning pretty heavily on Joe Mixon in this matchup which leaves Higgins and Boyd as fringe plays that I'd likely just rather fade outside of maybe one lineup in a 20-max contest.